Oil and natural gas activity sharply expanded during the first three months of the year in Texas, New Mexico and Louisiana, according to a survey by the Federal Reserve Bank of Dallas. 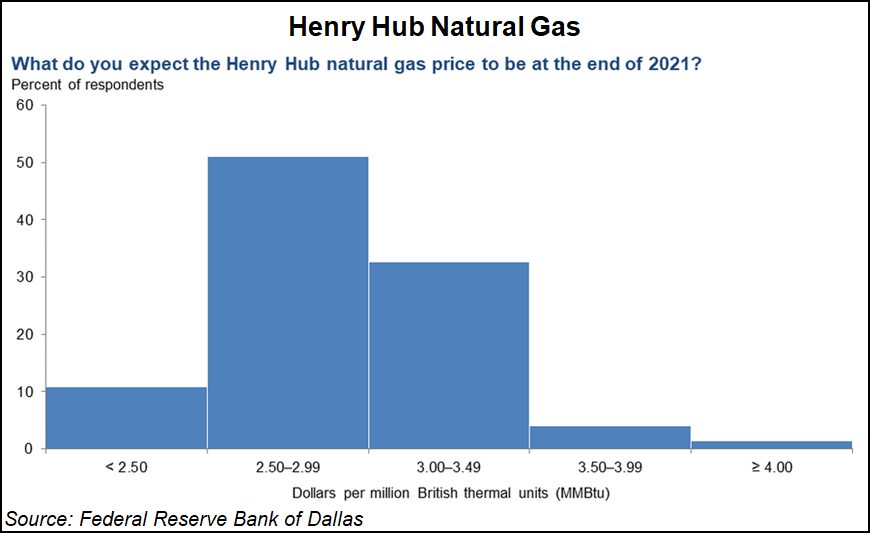 Every quarter the Dallas Fed, as it is better known, surveys executives of exploration and production (E&P) firms and oilfield services (OFS) companies headquartered in the Eleventh District. The district, which covers all of Texas, northern Louisiana and most of New Mexico, is home to the Permian Basin, Eagle Ford and Haynesville shales.

The business activity index, considered the survey’s broadest measure of conditions facing Eleventh District energy firms, soared to 53.6 from 18.5 in the fourth quarter, “its highest reading in the survey’s five-year history.”

Both E&Ps and OFS firms experienced a “strong expansion in activity,” according to the 155 firms responding. The survey was conducted March 10-18, with 104 E&P responses and 51 from the OFS sector.

According to the E&P executives, production climbed in the first quarter from late 2020. The oil production index rose to 16.3 from 1.0 in 4Q2020. Likewise, the natural gas production index turned positive, up 18 points to 15.9.

“Additionally, the index for the expected level of capital expenditures next year came in at 49.5, signaling firms have increased their capital spending plans for 2022,” energy economists noted.

In another strong signal that activity is on the rise, OFS firms, which depend on E&P activity to grow, reported improvement in every category from 4Q2020.

The OFS equipment utilization index surged, jumping 57 points to 63.2 in the first quarter. In addition, operating margins improved and moved into positive territory to 14.9 from minus 31.9.

Also turning positive was the index of prices received for services, which rose to 20.0 from minus 29.7. However, the index for input costs also increased to 36.0 from minus 4.3, “suggesting mounting cost pressures,” economists noted.

In another positive indicator for the Lower 48, employment is rising following seven consecutive negative readings that indicated contracting payrolls. The aggregate employment index hit 8.4 versus minus 11.7 in 4Q2020.

“Employment growth was driven primarily by OFS firms,” economists said. “The employment index was 23.5 for services firms versus 1.0 for E&P firms.”

Also reversing to positive territory was the employee hours index, which hit 22.8 from minus 6.9. The aggregate wages and benefits index also reversed, reaching 14.8 from minus 12.4.

“Six-month outlooks improved notably, with the index rising from 21.6 last quarter to 70.6, the highest reading in the survey’s five-year history,” the Dallas Fed’s economists said.

“Additionally, firms noted less uncertainty around their outlook this quarter than last.”

Per usual, the Dallas Fed posed special questions for the executives, including an annual update on the breakeven prices by basin. The 151 executives who responded to the special questions also were quizzed on expected changes in employee headcounts, changes in OFS pricing, as well as the potential impact from changing federal regulation on profitability.

“Breakeven prices for profitably drilling a new well averaged $52 among all respondents, up slightly from last year’s average of $49/bbl,” Plante said. “As in past years, there was wide variation, with responses ranging from $20/bbl to $100/bbl.

“Higher oil prices since the start of the year mean more than half of respondents are now able to profitably drill a new well.”

Seventy-one of the OFS executives expect the selling price for their primary service or product will “slightly increase” to the end of the year from 2020. Slightly more than half (53%) expect their workforces to remain static, but 39% plan to add more employees.

Meanwhile, 58% are concerned that “increased federal regulation will make their business unprofitable,” the survey indicated. “The remaining 42% aren’t concerned.”

President Biden in January directed the Department of the Interior to pause new oil and natural gas leasing on federal lands and offshore waters. A hearing is scheduled for Thursday to begin a review of potential changes to the federal permitting process.

One E&P executive who replied to the special question said the “current federal regulations are very concerning. We have a strong New Mexico presence, and that is being jeopardized significantly” by the Biden administration.

Another E&P executive said “the decidedly oil and gas unfriendly Biden administration has us in the crosshairs. I believe that it is their goal to effectively shut down our industry, and they will pursue that end with great energy. I am happy that my career is nearly over and am worried about the future of our industry.”

The oil and gas industry, said another, “does not need government intervention and additional political risk right now. If there is a need to make changes, it should be done with transparency and incrementally over time with industry input. Rash and disruptive decisions do not help an industry that is already very volatile.”

Another E&P executive said, “Various political stances are attempting to villainize the entire industry, which is counterproductive to the stated desires of ‘getting green.’

Natural gas is a critical transition energy source and needs to be spurred by incentives to capture and sequester rather than having obstacles, bureaucratic ‘red flags’ and knee-jerk policy pronouncements that are simply serving as shortsighted political postures.”

Still another noted the frustration at seeing the “progressive ‘left’ exert pressure on the new administration, pushing them not to appoint or hire anyone who has any experience with oil and gas production. This will cause America to relinquish its positive trade balance in oil and regain the posture as the world’s biggest importer of oil in just a few years.”