As oil and natural gas prices surged, drilling and energy business activity across the Federal Reserve Bank of Kansas City’s footprint hastened in the third quarter, results of a new survey show. 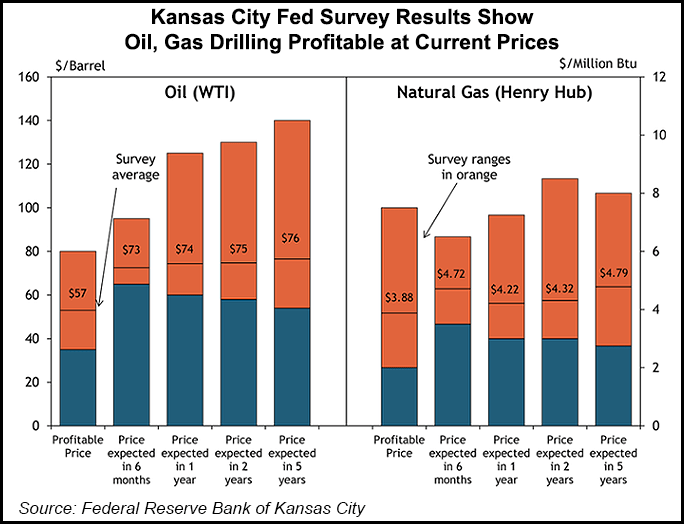 The Kansas City Fed, as it is commonly known, said its quarterly Tenth District Energy Survey found that oil and gas firms collectively reported greater activity in 3Q2021 when compared with both the prior quarter and the year-earlier quarter.

A majority of firms reported higher revenues and profits. Drilling and business activity expectations for coming quarters also increased, with participating executives noting strong demand and lofty oil and gas prices. The Kansas City Fed’s district includes the western third of Missouri; all of Kansas, Colorado, Nebraska, Oklahoma and Wyoming; and the northern half of New Mexico.

Prices are surging amid tight global supplies and strong demand as countries across the globe emerge from the worst of the pandemic and energy needs escalate, said Chad Wilkerson, a Kansas City Fed economist.

Overall, firms reported oil prices “needed to be on average $57/bbl for drilling to be profitable, and natural gas prices needed to be $3.88,” Wilkerson said.

The Kansas City Fed’s drilling and business activity index rose from 33 in the second quarter to 39 in the third quarter. It hovered at a meager reading of 4 a year earlier amid demand destruction imposed by the pandemic. The latest survey was conducted over the last half of September.

The indexes for revenues, capital expenditures, supplier delivery time, employees, employee hours, wages and benefits, and access to credit rose at a faster pace in 3Q2021 compared to a year earlier, Wilkerson said.

Expectations indexes continued to expand in the third quarter. The future drilling and business activity index, at 46, was up from 41 in 2Q2021, “indicating additional firms expected energy activity to expand. Future revenues and profits indexes remained very high, and expectations for wages and benefits increased.”

Participants were also asked their expectations for U.S. oil production, with 60% of firms not expecting output to return to pre-pandemic levels, while 40% responded affirmatively that production would rebound to levels generated in 2019, prior to coronavirus outbreaks.

Those who anticipate the full recovery in later years – or not at all – noted that, while activity is increasing overall, major U.S. producers have been slow to ramp up output, preferring instead to return more capital to shareholders or to invest more in renewable energy projects.

Though not asked about natural gas output specifically, respondents to the survey who expect rising oil production said it would result in increased supplies of associated gas. This is important, one respondent said, because “worldwide demand for natural gas is extraordinarily strong.”

With both gas and oil supply challenges, and with U.S. output still relatively soft, the global market is turning to the Organization of the Petroleum Exporting Countries (OPEC) and its allies, aka OPEC-plus.

That is 100,000 b/d more than the pace of OPEC-plus increases currently in the works. The cartel earlier this month approved another 400,000 b/d production increase for next month, continuing a plan launched in August.

However, Rystad Energy analyst Louise Dickson said that, barring more aggressive OPEC-plus increases, supply could trail demand into 2022. “The supply response can only be described as lagging,” Dickson said, despite the “robust price environment.”