U.S. crude oil exports drove another record quarter for the Port of Corpus Christi in South Texas as Western European buyers continue to shift away from Russian crude imports following the Kremlin’s invasion of Ukraine, it said Monday. 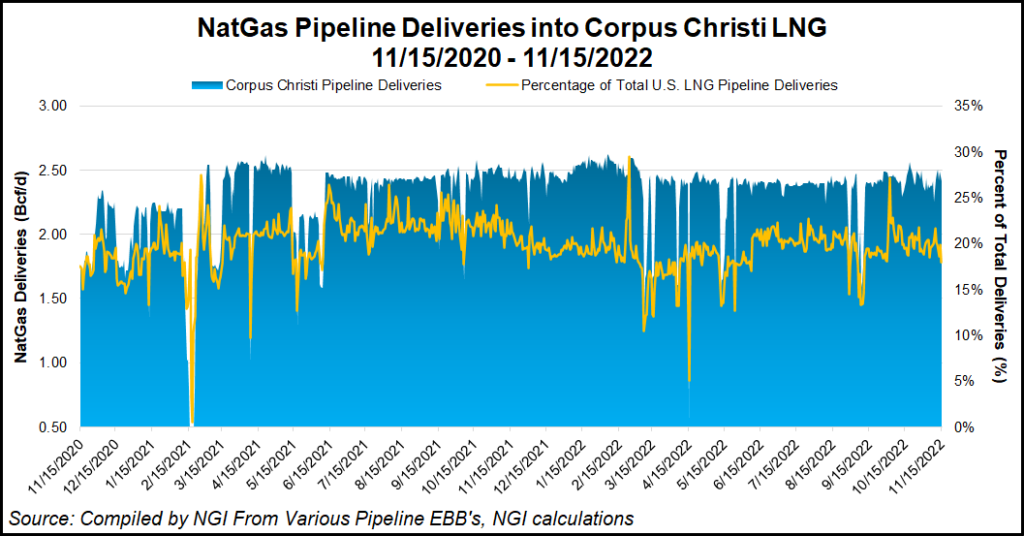 A record of 48.3 million tons set in the third quarter surpassed the previous tonnage record of 46.4 million tons set in 2Q2022, according to the port. This was a 4% increase on overall tonnage and followed trade sanctions on Russian crude oil by the United States and its Western European allies following the February attack.

Refined petroleum products and LNG also contributed to the record quarter, the port said. Meanwhile, additional tonnage records have been reached this year in renewable energy components as more wind turbines and blades move through the Corpus port.

“In these times of uncertainty, moving America’s energy to other U.S. demand centers and our overseas allies and trading partners has never been more critical for our economic and national security,” said CEO Sean Strawbridge.

The continued strength in oil exports aligns with the Energy Information Administration’s (EIA) positive outlook for consumption in the near term. In its Short-Term Energy Outlook (STEO), the EIA said it expects global oil consumption to outpace global production next year, leading to higher oil prices in the second half of 2023.

At the same time, the agency sees total Russian liquids production declining from 10.9 million b/d on average in the third quarter to 10.8 million b/d in the final three months of the year. Russian output is expected to average 9.3 million b/d in 2023, according to the latest STEO.

“The Port of Corpus Christi is a key economic engine not just for the Texas Coastal Bend region, but also the state and the nation,” said Port Chairman Charles W. Zahn Jr. “This success also allows the Port of Corpus Christi to reinvest into this great community and plan for future infrastructure improvements that will further the Port’s commitment to serving not only its existing customer base, but also attracting new customers to the region.”

Against that backdrop, the port in August approved a lease agreement with Buckeye Partners LP to establish the port’s first solar farm. The 81,000-plus panel project would be located in San Patricio County on Corpus Christi port property near Midway Junction.

The agreement provides Buckeye two years to evaluate the feasibility of constructing the solar farm project on about 137 acres of port-owned property. Buckeye owns 112 acres of adjacent property, yielding a combined acreage of about 249 acres available. The farm could have the capacity to produce 88,000 MWh of electricity per year.

Meanwhile, work is continuing on the Corpus Christi Ship Channel Improvement Project. The four-phase project is designed to increase the channel depth from minus 47 feet Mean Lower Low Water (MLLW) to minus 54 feet MLLW and widen it to 530 feet, with an additional 400 feet of barge shelves. Phase 1 has been completed, and the remainder is expected to be completed by the end of next year.