Crude oil prices, permits to drill and industry employment all surged in July to boost the Texas Petro Index (TPI) by 3.5 points — the largest month-to-month increase in 18 months — to a record 287.7. The previous record was set in 2008. 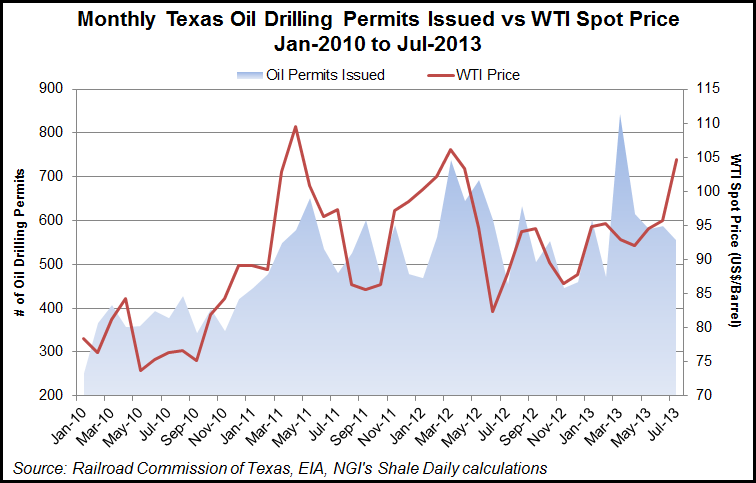 “The monthly crude oil price rose by more than $9.00/bbl in July to average more than $100/bbl for the first time since March 2012,” said Karr Ingham, the economist who created the TPI for the Texas Alliance of Energy Producers. “The number of original drilling permits issued was up by more than 18% in July compared to July 2012 and oil and gas industry employment was up by more than 6%.”

Ingham attributed higher oil prices, in part, to political instability and social unrest in the Middle East. But he added that, as U.S. producers continue ramping up domestic oil production and reserves, dependence on oil from troublesome parts of the globe is being dramatically reduced. Noting suggestions that growing U.S. crude oil production has not kept geopolitical turmoil overseas from exerting upward pressure on domestic oil prices, he said, “Such disruptive events will be market-movers for a long time to come.

“However, the U.S. is more shielded from threats to foreign oil supplies as the percentage of total consumption served by crude oil imports has declined, and if anything, these events magnify the need to continue to develop domestic energy resources.”

A composite index based upon a group of upstream economic indicators, the Texas Petro Index in July increased to a record 287.7, up 4.4% from the same month in 2012. The TPI’s previous all-time high of 287.6 occurred in September and October 2008, after which the TPI declined to 188.5 in December 2009 before embarking upon the current growth cycle.

The Baker Hughes Inc. count of active drilling rigs in Texas averaged 841, 7.6% fewer than in July 2012 when 910 rigs on average were operating. Drilling activity in Texas peaked in September 2008 at a monthly average of 946 rigs before falling to a trough of 329 in June 2009.

The number of Texans estimated to be on oil and gas industry payrolls reached a record 280,500, according to statistical methods based upon Texas Workforce Commission estimates revised in March. Industry employment in Texas dropped to a low of 179,200 in October 2009 after reaching a high of 223,200 in November 2008 during the previous growth cycle.