The oil market turmoil earlier this year provided a “rock solid bull trade for natural gas” that lifted basis to levels that should hold through 2021, particularly for West Coast locations and the upstream markets that serve them, according to market experts. 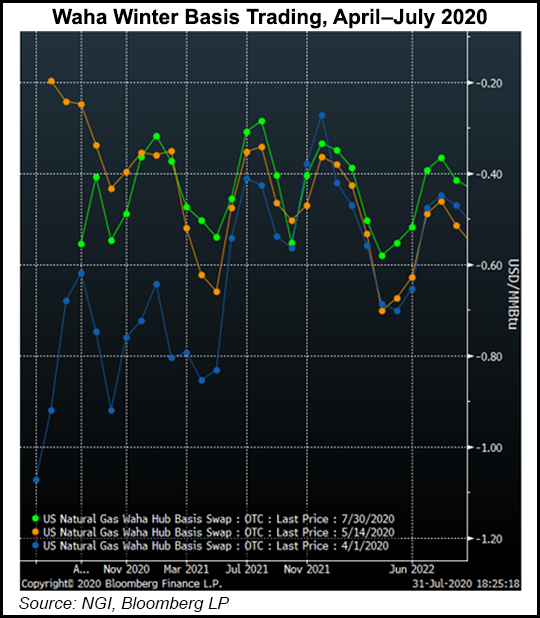 Speaking Wednesday during a webinar hosted by Bloomberg and Natural Gas Intelligence, NGI’s David Dutch, vice president of Business Development and Client Support, said once West Texas Intermediate (WTI) oil prices crashed to an unprecedented minus $37.63/bbl on April 21, the writing was on the wall for oil production.

A byproduct of the retreat in oil activity, though, was the reduced outlook for the associated gas produced, particularly in the Permian Basin. The decline in associated gas led to a wave of strong buying in the gas market, according to the former trader, with other bullish factors aiding the rally, including strong power burns and new infrastructure.

On April 1, the winter strip was averaging about 76 cents below benchmark Henry Hub prices, in large part because of rampant production and inadequate takeaway capacity in the Permian. By May 14, the Waha discount slimmed down to around 37 cents, a level that’s held relatively steady.

It’s mostly because associated gas production took a meaningful step back following the WTI plunge. BloombergNEF natural gas analyst Jade Patterson said as exploration and production companies slashed budgets by an average 49% and slowed activity, about 758,000 b/d of production was shut-in during May. This lowered associated gas output in the Permian to around 9.6 Bcf/d, after reaching 12.2 Bcf/d earlier in the year.

“As shut-ins took place, production backed off, freed up space in the pipes and injections took off,” Patterson said.

As oil prices have bounced back to around $40, production has been quick to recover, at least to a degree. On the gas side, Permian associated gas output has since climbed back north of 11 Bcf/d, keeping a lid on forward curve gains in recent weeks.

Meanwhile, pricing also has been impacted by a handful of maintenance events, both planned and unplanned, on major pipelines moving gas out of the region.

El Paso Natural Gas scheduled several pig runs for this week and for later this month, which has disrupted westward flows out of the Permian and helped drag down Waha basis. The first of the pig runs began Monday (Aug. 3), possibly contributing to Friday’s (July 31) price plunge in the spot market, which resulted in the first return to negative pricing since mid-April, according to Genscape Inc. analyst Joe Bernardi.

With flows at the “L2000” meter in West Texas to be cut by about 270 MMcf/d on three separate occasions this month, limitations could help to trigger downward movements in Waha basis, especially if other export disruptions coincide with L2000 maintenance, he said.

An outage at a compressor station along Transwestern Pipeline also impacted spot markets on Wednesday, though fixed prices remained firmly in positive territory.

Pipeline maintenance aside, Permian production fell over the first weekend of August, with Genscape reporting that Alpine High and deliveries from interstates to Gulf Coast Express (GCX) both decreased.

“It’s worth noting that beginning of the month volumes can be more susceptible to revisions, but both of these sets of volumes have shown past correlation with Waha price movements,” Bernardi said.

Alpine High production visible on interstates averaged 238 MMcf/d during July, but it fell to 109 MMcf/d in the early cycles for Monday’s gas day, according to the analyst. Interstate deliveries to GCX also dropped to less than half their July average, with the decline in those volumes beginning last Friday (July 31) and continuing through the weekend.

Analysts generally agree that Permian production is expected to slide to around 11 Bcf/d by the end of the year. Therefore, the stronger Permian pricing is here to stay, according to Patterson. The analyst expects basis pricing to remain low as fewer wells are completed and turned to sales. Furthermore, once Kinder Morgan Inc.’s Permian Highway Pipeline (PHP) begins operations, slated for early 2021, “the story is not that exciting when it comes to basis,” he said.

Meanwhile, downstream markets generally have ebbed and flowed in similar fashion, according to Dutch. “We’ve seen very similar behavior in California, where prices rallied and then retraced a bit as production has increased.”

SoCal Border Avg. winter basis tracked about 20.5 cents above Henry Hub at the start of April, according to Dutch. However, by May 14, that premium widened to 42 cents.

In addition to the production declines, California pricing also was heavily influenced by weather at the start of the summer season, which officially kicks off in April in the natural gas markets. California, in particular, bore the brunt of the early heat that the Lower 48 experienced early in the season, with temperatures soaring into the 90s and driving up power demand.

However, with production returning to the market, SoCal Border Avg. winter basis has since retreated to its roughly 20-cent early April range, Dutch said.

Pricing behavior in the Rockies caught Dutch, a former West Coast trader, off guard. “The Rockies curve went positive, something that never happens. There were some pretty impressive moves there.”

For example, Northwest Pipeline winter basis stood 12 cents below Henry Hub on April 1. By mid-May, the strip moved to a 10-cent premium over the U.S. benchmark and now sits more or less on par with the southeastern Louisiana hub.

The strength occurred as Rockies production also took a hit, going from around the low 8 Bcf/d mark down to around 7 Bcf/d, according to Patterson.

In the Pacific Northwest, Northwest Sumas responded similarly. However, Dutch noted the intense level of fear that traditionally has characterized that market, especially in the wake of the October 2018 blast on Westcoast Transmission that sent spot pricing booming in the days and months after, including a record high of $161.33 on March 1, 2019.

“Sumas was Algonquin before anyone had ever heard of Algonquin,” Dutch said in reference to the constrained and often volatile New England hub.

Another surprising move, or lack thereof, was seen north of the U.S. border, at NOVA/AECO C in Western Canada, according to Dutch. Winter basis barely batted an eyelash as oil and gas production declined in April and May, moving from minus 94.0 cents to minus 91.5 cents. However, since then, basis has followed suit, standing at the end of July at minus 75 cents and remaining at that level as of Wednesday (Aug. 5).

“NOVA/AECO C trades huge volumes,” Dutch said. “I’m not sure what the theory was behind the lack of movement.”

The delayed reaction in the NOVA/AECO C forward curve may have been because of a similar nonresponse in Midwest demand centers, particularly at the Chicago Citygate and Northern Natural Demarc hubs. “Since they didn’t move, AECO didn’t move,” Dutch said.

He “strongly believes” AECO should have rallied at the onset of the oil price crash, but “where it is now makes sense. I just think it should have gotten there sooner.”

Going forward, many positives are working for basis prices throughout the Permian and West Coast, particularly when it comes to liquefied natural gas (LNG) exports. While PHP is set to start transporting gas to the Gulf Coast next year, Sempra Energy’s proposed Energia Costa Azul LNG export project in Baja California, Mexico, could further support prices. The project is not yet sanctioned, and executives did not provide a timeline on reaching a final investment decision during the second quarter earnings call.

“If Costa Azul has to pull gas off the El Paso pipeline and move south on North Baja Pipeline or Otay Mesa, that would be very bullish for Socal Border and Socal Citygate basis differentials,” said Dutch. “It will also cause severe volatility at the physical trading hubs of SoCal-Ehrenberg and El Paso S. Mainline.”

If Sempra and subsidiary Infraestructura Energética Nova were to build a pipeline from the Permian through Mexico to source Costa Azul, it would still put upward pressure on the SoCal basis differentials, Dutch said, “but not nearly as much so as if the gas is sourced off of El Paso.”