The U.S. rig count surged 13 units higher to finish at 282 for the week ending Friday (Oct. 16) on the strength of gains in oil-directed drilling, according to the latest data from oilfield services provider Baker Hughes Co. (BKR). 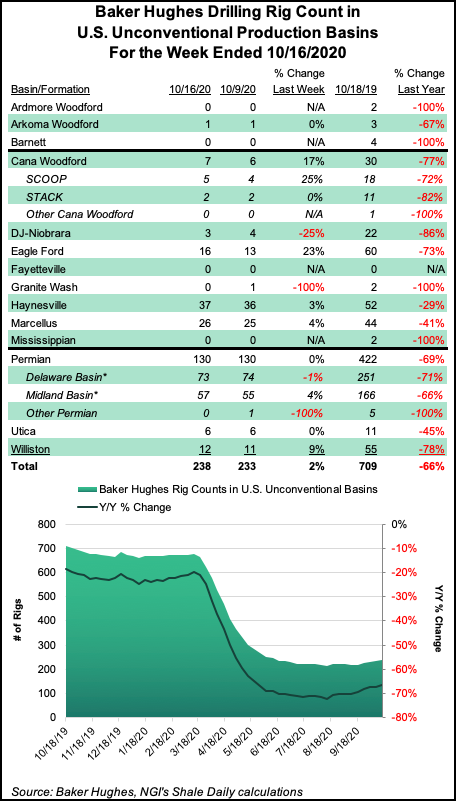 Twelve oil-directed rigs and one natural gas-directed rig were added in the United States for the week, leaving the combined domestic tally still 569 units shy of the 851 rigs running in the year-ago period.

All of the gains occurred on land, with the Gulf of Mexico count flat week/week at 14. Seven horizontal units and six vertical units were added, with the total number of directional rigs unchanged, according to BKR.

The Canadian rig count ended the week flat at 80, with the addition of one oil-directed rig offsetting the departure of one gas-directed unit. The Canadian count finished 63 units behind the 143 active rigs a year ago.

The overall North American rig count closed out the week at 362, versus 994 in the year-ago period.

Broken down by basin, BKR tallied a three-rig increase in the Eagle Ford Shale, leaving the play with 16 active units for the week, versus 60 a year ago. Elsewhere among plays, the Cana Woodford, Haynesville Shale, Marcellus Shale and Williston Basin each picked up one rig on the week, while the Denver Julesburg-Niobrara and Granite Wash each dropped one, BKR data show.

Among states, Texas led the way during the week, adding seven rigs to grow its total to 123, down 300 units year/year. Utah added three rigs during the week, while Oklahoma and Wyoming each added two.

North Dakota and West Virginia added one rig each. Colorado dropped one rig, while Louisiana saw a net decline of two rigs, according to BKR.

The Covid-19 pandemic has decimated drilling activity in the U.S. onshore. Still, there could be a silver lining for natural gas bulls.

The extensive oil production declines amid the pandemic’s fallout have cut deep enough into associated gas supplies that it’s likely to help drive up Henry Hub natural gas prices in 2021, according to a recent analysis from Raymond James & Associates Inc.

In the meantime, the upcoming 3Q2020 earnings season could be a “quiet” one for exploration and production and oilfield services companies.

Natural gas and oil operators are likely to report a return to normalcy — but not growth — when they unveil their third quarter results in the coming weeks, but the demand forecasts may be hazy amid a historic hurricane season and the expanded wave of damaging Covid-19 infections.