The recovery in global oil demand will limp along early in 2021 but should quicken in the second half of the year, as coronavirus vaccine distribution efforts make headway and travel increases, both the International Energy Agency (IEA) and the Organization of the Petroleum Exporting Countries, aka OPEC, said in new forecasts this month. 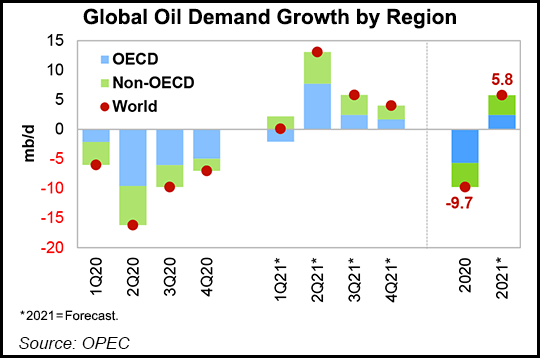 In its February Oil Market Report, IEA estimated that global oil demand would rise by 5.4 million b/d in 2021 to reach 96.4 million b/d, recovering roughly 60% of the volume lost to the pandemic in 2020.

“While oil demand is expected to fall by 1 million b/d in 1Q2021 from already low 4Q2020 levels, a more favorable economic outlook underpins stronger demand in the second half of the year,” IEA researchers said.

The Paris-based agency noted in its most recent update that the International Monetary Fund raised its global economic growth forecast for this year to 5.5% from 5.2%, pointing to a recovery in manufacturing activity and stronger growth expectations for the United States.

That noted, IEA said most of the growth is expected later this year. Virus outbreaks during the winter months have limited travel and kept a lid on demand for gasoline and jet fuel.

“Renewed lockdowns, stringent mobility restrictions and a rather slow vaccine roll-out in Europe have delayed the anticipated rebound until the second half of the year,” IEA said. “The forecasts for economic and oil demand growth are highly dependent on progress in distributing and administering vaccines, and the easing of travel restrictions in the world’s major economies.”

Oil prices last week and again early this week hovered around a one-year high, with Brent crude, the global benchmark, topping $60/bbl. If that level is sustained, producers are likely to ramp up output as the year wears on, the agency said.

The blast of frigid temperatures that sent heating demand soaring throughout the nation’s midsection in recent days contributed to the oil price rally. But much of the positive momentum is fueled by expectations for vaccines to quell virus outbreaks in coming months.

“All vaccine-related news are forward looking indicators of what the market is already pricing in — a strong demand recovery towards the summer,” said Bjornar Tonhaugen, head of oil markets at Rystad Energy.

OPEC and its allies, aka OPEC-plus, this month maintained lower near-term production targets. The cartel had previously called for its members to keep supply levels steady this month, with the exception of leader Saudi Arabia, which agreed to voluntarily trim output by 1.0 million b/d this month and next to offset light global demand this winter.

Outside of OPEC-plus, however, producers already “are responding to higher prices, albeit cautiously and from a low level,” IEA said.

“Led by the prolific Permian Basin, U.S. drilling and completion rates have risen steadily in recent months. While investor guidance published to date suggests operators will stick to financial discipline and reward shareholders in 2021, at current prices there is clearly potential for some producers to respect those engagements and modestly increase their capital expenditure,” researchers said. “Canada, now pumping at record rates, has restored nearly all the volumes shut in at the height of last year’s demand collapse.”

“With demand forecast to rise strongly and still modest growth in non-OPEC supply expected, a rapid stock draw is anticipated during the second half of the year,” the agency added. “That sets the stage for OPEC-plus to start unwinding cuts” later this year.

OPEC, meanwhile, lowered its expectations for global oil demand in a February projection. It forecasted that demand would rise by 5.8 million b/d to average 96.1 b/d this year, though that was more than 100,000 b/d lower than a previous estimate. The cartel cited the festering impact of the pandemic on travel early this year.

Despite near-term impacts, however, “positive developments on the economic front, supported by massive stimulus programs, are expected to encourage demand in various sectors” in the second half of 2021, OPEC researchers said.

“The key contributors to non-OPEC supply growth in 2021 are expected to be Canada, Brazil, the U.S., Norway, Ecuador, Qatar and Guyana, while declines are seen coming from Russia, the Sudans, Malaysia and the United Kingdom,” OPEC researchers said.