A mix of gains and losses in the U.S. onshore, including an uptick in the Permian Basin and a drop in the Marcellus Shale, saw the domestic rig count finish at 457 units as of Friday (May 28), up two week/week, according to Baker Hughes Co. (BKR). 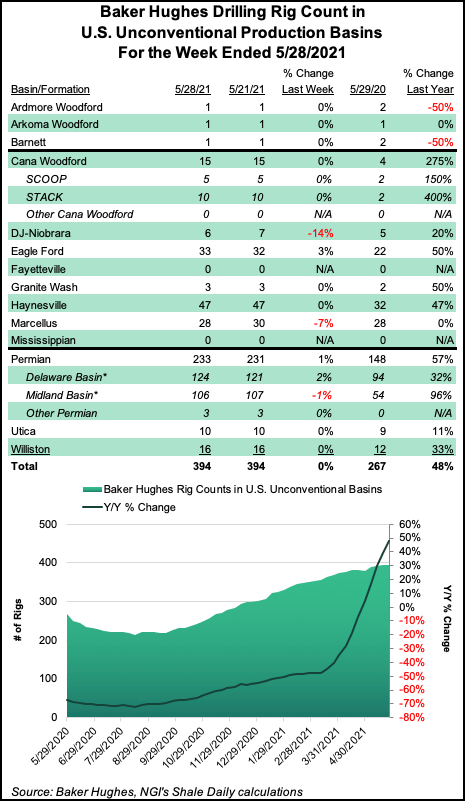 The addition of three oil-directed rigs in the United States offset a net decline of one natural gas-directed unit for the week. The combined 457 rigs as of Friday compared with 301 rigs running in the year-ago period, according to the BKR numbers, which are based partly on data provided by Enverus.

The Canadian rig count gained four units week/week to finish at 62, up from 20 in the year-ago period. Changes there included the addition of three oil-directed rigs and one gas-directed.

Broken down by play, the Permian added two rigs during the period, upping its count to 233, versus 148 a year ago. On the other side of the ledger, the Marcellus dropped two rigs to fall to 28, flat year/year. Also among plays, the Eagle Ford Shale added one rig for the week, while the count in the Denver-Julesburg Basin/Niobrara formation declined by one, according to BKR.

Broken down by state, Texas added four rigs to its total during the week, while Oklahoma added two. Pennsylvania saw a net decline of two rigs, while New Mexico and Colorado each dropped one rig from their respective totals.

Earlier in the week a report from Pennsylvania’s Independent Fiscal Office found that natural gas production and prices in the state both rebounded sharply during the first quarter after a pandemic-induced slump in 2020. Gas production from horizontal wells totaled 1,863 Bcf during 1Q2021, up 5.4% year/year, researchers said.

The report, based on data compiled by the Pennsylvania Department of Environmental Protection, showed “a clear acceleration” of production “after several quarters of moderate growth.”

Meanwhile, Bakken Shale producers expecting to continue to ship oil on the Dakota Access Pipeline got some encouraging news as a court ruling allowed the conduit to continue operating while regulators develop an environmental impact statement (EIS).

U.S. District Court for the District of Columbia Judge James Boasberg last year axed a key permit for the pipeline to cross underneath Lake Oahe, which necessitated the EIS. In seeking an injunction, the tribes, led by the Standing Rock Sioux, failed to demonstrate that — among other things — they would likely suffer irreparable harm in the absence of an order closing the pipeline, according to the ruling.