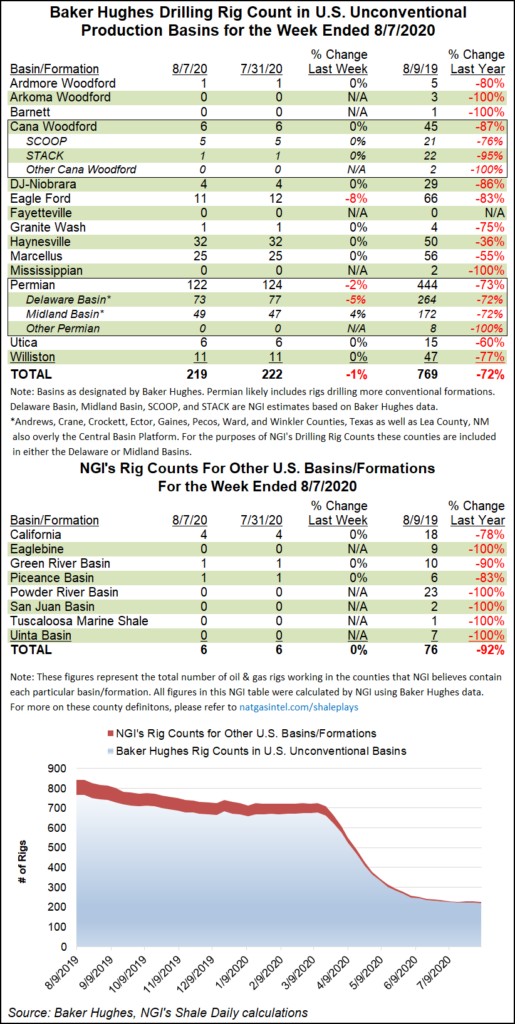 Yet another round of losses in the oil patch saw the U.S. rig count slide four units to 247 for the week ended Friday (Aug. 7), according to updated numbers from Baker Hughes Co. (BKR).

Total oil-directed rigs in the United States fell four units to 176, while natural gas-directed rigs held steady at 69. The combined U.S. tally ended the week nearly 700 units behind the 934 rigs active at this time last year.

All of the losses recorded for the week occurred on land; Gulf of Mexico activity remained unchanged at 12 rigs overall. Five horizontal units and one vertical unit exited on the week, partially offset by the addition of two directional units, according to BKR.

The Canadian rig count climbed two units week/week to finish at 47 overall. The addition of two oil-directed rigs and one natural gas-directed rig was partially offset by the loss of one miscellaneous unit.

The combined North American rig count ended the week at 294, down from 1,074 in the year-ago period.

Among major plays, the Permian Basin posted the largest week/week decline, sending two rigs packing to end at 122, versus 444 in the year-ago period. The Eagle Ford Shale saw one rig exit to fall to 11 overall, versus 66 a year ago.

Among major states, New Mexico saw the only net change for the week, dropping three units to decline to 46. That’s down from 109 at this time last year, BKR data show.

As exploration and production companies continue to roll out 2Q2020 financial results, a picture is starting to take shape for how operators plan to bring output back online (or not) after pandemic-induced curtailments earlier this year.

Gulfport Energy Corp. is still curtailing Appalachian natural gas production in anticipation of better prices later this year and into 2021.

Permian heavyweight Pioneer Natural Resources Co. is raising its 2020 oil production guidance by 2.5%, but it is keeping most of the oil volumes that were curtailed during the second quarter offline until commodity prices improve, management said Wednesday.

The Irving, TX-based independent curtailed about 7,000 b/d of net oil production during 2Q2020 and said it expects to keep about 6,000 b/d shut-in amid the current price environment, CEO Scott Sheffield told analysts during the quarterly earnings call.

Meanwhile, after curtailing production in the second quarter, Continental Resources Inc. expects to boost cash flow at $40/bbl West Texas Intermediate pricing as it looks to ramp up output through the end of the year, management said.