Oil consumption will rise in 2021 alongside a global economic recovery and increased travel, though demand this year is not likely to match the levels prior to the pandemic, the U.S. Energy Information Administration (EIA) said. 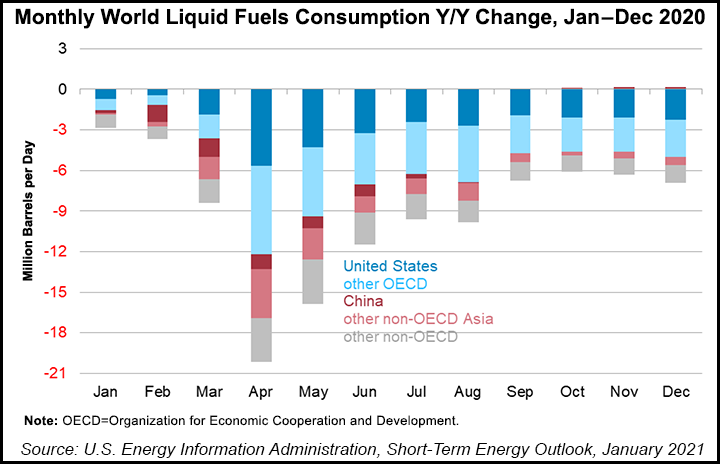 In a supplement to its monthly Short-Term Energy Outlook (STEO) report, the agency forecast global oil consumption would gather momentum “as the year progresses,” growing by 5.6 b/d, or 6%, for the full year. EIA forecasts that the United States will account for 1.4 million b/d of the growth.

The agency cited an expected “return to more normal consumer behavior” by midyear that could drive increased travel, boosting demand for jet fuels and gasoline derived from oil. This is based in part on the current rollout of coronavirus vaccines across North America, Europe and Asia that U.S. public health officials have said could substantially curb outbreaks of the disease by summer.

“Oil consumption will grow in 2021 because of both economic growth and a return to more normal travel patterns by the middle of the year,” EIA researchers said.

In total, the agency expects global oil consumption will average 97.8 million b/d this year, which would mark a 3% decline from the 2019 level.

EIA noted that the uncertain trajectory of the pandemic remains a wild card. While cases in the United States and in several other prominent economic hubs around the globe have tapered off early in 2021, outbreaks tend to follow mass gathering events. Such events could emerge at any point, setting the stage for rising cases, at least until vaccines are widely distributed.

EIA noted that, after dropping last April, oil demand recovered over the summer but leveled off by 4Q2020. After increasing from 80.6 million b/d in April to 94.7 million b/d in September, EIA estimated that global oil consumption averaged 95.4 million b/d in the final quarter of last year. Virus cases surged late in 2020.

EIA on Tuesday separately forecasted in its February STEO that domestic natural gas consumption would average 81.7 Bcf/d in 2021, down 1.9% year/year, reflecting decreased power burn due to higher prices.