Another crisis for Europe’s gas market was avoided late Monday after the Norwegian government intervened to stop a strike that could have significantly cut production from some of the country’s most critical gas fields. 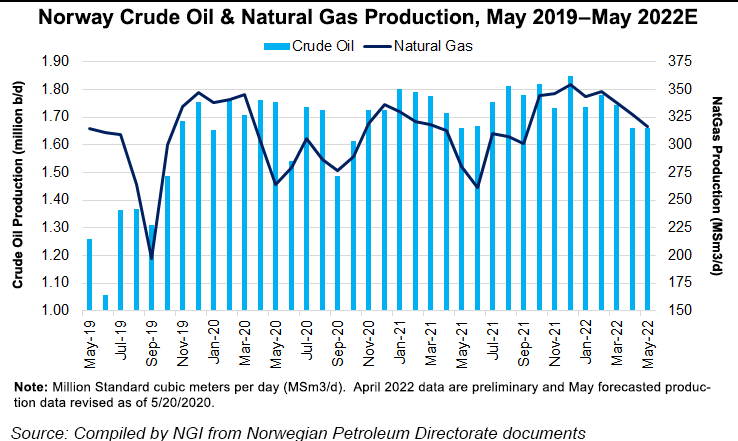 Norway’s Labor Ministry announced late Tuesday that the government took emergency action to intervene in the flagging negotiations between the Lederne union and oil and gas field operators. Workers reportedly returned to their positions while companies and Lederne worked on a settlement, avoiding a potential 56% drop in Norwegian gas exports.

Norway’s Equinor ASA, which operates several of the country’s most prolific gas and oil fields, said work had restarted at the Gudrun, Oseberg South and Oseberg East fields by early Wednesday morning. All fields could return to full operation within the next few days, according to the company. The three impacted fields produce a combined 89,000 boe/d.

Energy researchers noted a swift response in the market after prices surged Tuesday. While the Title Transfer Facility (TTF) pulled back in early trading Wednesday, the prompt contract settled at more than $50/MMBtu, its highest point since March. Traders continue to weigh the possibility that Russia could stop deliveries to Europe on Nord Stream 1 even after the pipeline concludes annual maintenance from July 11-21.

Flows on the system have already been reduced by 60% due to what Gazprom PJSC said is a technical issue at a compressor station.

Rystad Energy analyst Lu Ming Pang said TTF would have surged higher Wednesday if the Norwegian government had not intervened to stop the strike.

Norway is Europe’s second largest pipeline gas supplier and made up about 23% of Europe’s total volumes last year. Norway has encouraged production growth for gas exploration on its continental shelf since Russia’s invasion of Ukraine in order to assist in the European energy crisis.

Norway’s Ministry of Petroleum and Energy announced Monday that several production permits would be increased, and the country’s annual gas exports were estimated to be 8% more compared to last year.

Fears of reduced volumes from Norway were compounded by growing anxiety around an end of flows from Russia. Analysts with Schneider Electric, in a note to clients Wednesday, said “fears of structural drops in Russian gas flows” after the Nord Stream 1 pipeline closes for maintenance on July 11 have been gradually pushing prices upward.

Prices on the European power market corrected Wednesday, however, “as the agreement with Norwegian striking parties relieves the pressure from markets,” the firm wrote.