Ohio’s unconventional oil and natural gas production again declined in the second quarter as shut-ins and low commodity prices persisted, according to recent data from the Ohio Department of Natural Resources (ODNR). 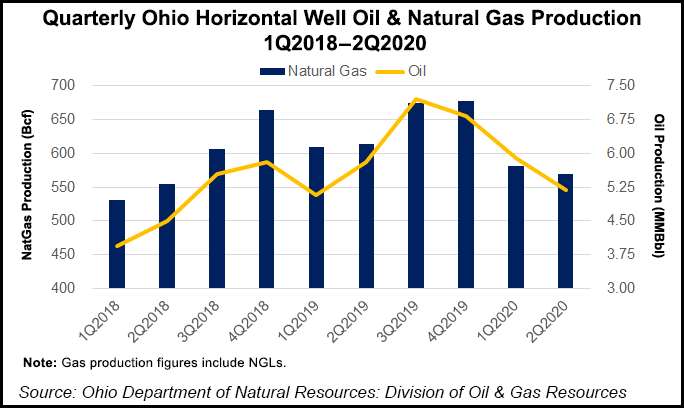 Unconventional natural gas production, driven almost entirely by volumes from the Utica Shale, was down 7% year/year to 569.4 Bcf. Volumes also fell from the 581.6 Bcf reported in 1Q2020. Oil production dipped 10% year/year to 5.2 million bbl, and sequentially from 5.8 million bbl.

Oil and gas production has been on the decline in Appalachia and across the country as producers acted quickly to shut-in volumes as they grappled with the Covid-19 pandemic and its impacts on demand and commodity prices. Pennsylvania reported declines in unconventional production last month too.

Many of Appalachia’s leading operators, such as EQT Corp., the nation’s largest gas producer, also shut-in volumes during the second quarter. While EQT brought back the bulk of the total 1.4 Bcfe/d in July, other operators have continued curtailments.