Industry experts said they were disappointed by the Utica Shale oil production figures for 2012 released Thursday by the Ohio Department of Natural Resources (ODNR), but they believe a clearer picture is beginning to emerge of where the play’s sweet spots for oil are located. 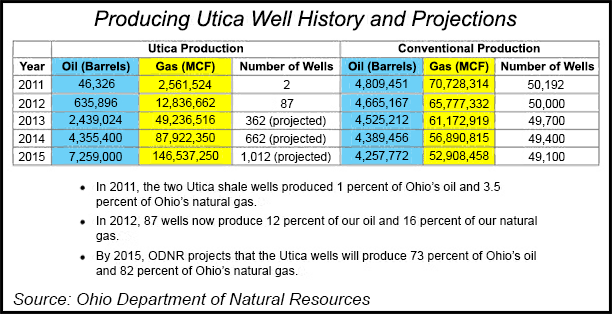 One day after the ODNR said 87 wells in the Utica collectively produced 12.84 Bcf of natural gas and more than 635,000 bbl of oil in 2012 (see Shale Daily, May 17), disagreement also emerged over the original expectations for the play in terms oil, and frustration over the agency’s reporting methods, especially for natural gas liquids (NGL).

“It doesn’t look like the oil is going to work,” Morningstar analyst Mark Hanson told NGI’s Shale Daily on Friday. “It’s obviously not going to be a repeat of North Dakota or South Texas. Whether or not it can be a low-cost source of gas and NGL content, I think that remains to be seen.”

“But on the whole, I would say it’s probably a little bit underwhelming at this point, especially with the lack of oil content,” Hanson said. “That was probably the most disappointing thing.”

Tom Stewart, executive vice president of the Ohio Oil and Gas Association, said he took issue with ODNR Director James Zehringer’s statement on Thursday that the Utica numbers signaled the production of “staggering amounts of oil and gas in the future.”

“I do not consider them to be ‘staggering’ amounts of oil and gas; I found them to be modest numbers that I would expect to come from a play that’s in its infancy,” Stewart told NGI’s Shale Daily on Friday. “We have always said that we believe this is a natural gas play with the possibility of liquids uplift, and that’s exactly what it’s shaping up to be.

“The press so far has been saying that it’s not going to be the oil-rich play that everybody’s been promoting. I don’t think we’ve ever been promoting it as an oil-rich play. We think that we have possibilities in the oil window, but there are technological challenges. But one thing I know about my industry is that we’re very good at solving technological challenges. All it takes is investment.”

Stewart said the oil and gas produced in 2012 equates to the cost to drill 10 or 11 wells. “No one’s making any money yet, they’re simply investing,” he said.

Asked whether production totals tabulated so far or a lack of infrastructure represented the bigger obstacle to Utica Shale development, Stewart said it was “clearly” the latter. “It’s a ‘chicken and an egg issue,’ but the midstream industry is furiously trying to solve that. I think Ohio owes them a lot for their investments that they’re making in this state.”

But Hanson said production results so far also pose an issue. “Chesapeake has said you’re going to see stepwise changes in production out of the Utica as midstream comes online,” he said. “That’s definitely been one of the bottlenecks.

“People are trying to put pins in the corner of the map to try to figure out exactly which counties work and which don’t. I think your concentric circles are going to be winnowed, and you’re going to figure out quickly which are the sweet spots. It looks like there are three or four counties right now: Carroll, Harrison, Jefferson and maybe Noble.”

During a conference call on Friday to discuss unconventional drilling in the United States, Credit Suisse analyst Arun Jayaram said producers were focusing on several “core counties” in eastern Ohio. He identified them as Carroll, Harrison, Belmont, Noble, Guernsey and parts of Monroe.

“Although some consider it an ‘analog’ to the Eagle Ford Shale, the results have not been nearly as strong to date,” Jayaram said. He added that despite the low production numbers, the counties “indicate potential for some of the best returns.”

Stewart said the media shouldn’t read too much into the separate decisions by Chesapeake and Devon Energy Corp. to sell their assets — and, in Devon’s case, all of its assets — in the Utica (see Shale Daily, April 11; Feb. 4).

“It was very brave of Devon to try and test the western side of the oil window,” Stewart said. “Give them a lot of credit for doing that. But like any of these companies, they make judgment calls on where they apply their capital. They have many, many choices, and they’re going to go where they feel they should be applying that capital. It’s as simple as that.

“As far as Chesapeake, they’ve done very well in Carroll County. I think they’re looking at what acreage is not strategic and saying perhaps they don’t need to have that acreage. They’re simply making business decisions.”

“We didn’t get any numbers on NGLs,” Hanson said. “We don’t know exactly what the content there of that gas is. I wouldn’t go as far as to say [their reporting was] ‘woefully inadequate,’ but from an information standpoint, I ‘m not sure why the state couldn’t release more data…It was hard to interpret and there wasn’t a whole lot of information there.”

“They’re nothing but estimates and wishful conjecture. There’s only one way to evaluate an oil and gas play, and that’s by what proven reserves produce,” Stewart said. He added that he believes the ODNR purposely didn’t release the figures until May because “these numbers are not as spectacular as you would hope that they would be. They’re certainly not supportive of a political agenda.”

Hanson said the projections “seem doable. It’s not a lot. It seems achievable, if only because it seems like it’s a low number relative to some of the other areas that produce [oil and gas].

“You’ve got to take everything with a grain of salt. Obviously, there’s a lot that still needs to be done in this area, with building out all the pipelines and figuring how to optimize oil and gas flow out of the wells.”