Carroll County and operators for Chesapeake Energy Corp. continue to hold the lion’s share of permits issued and producing wells in the Utica Shale, according to Ohio Department of Natural Resources (ODNR) figures. 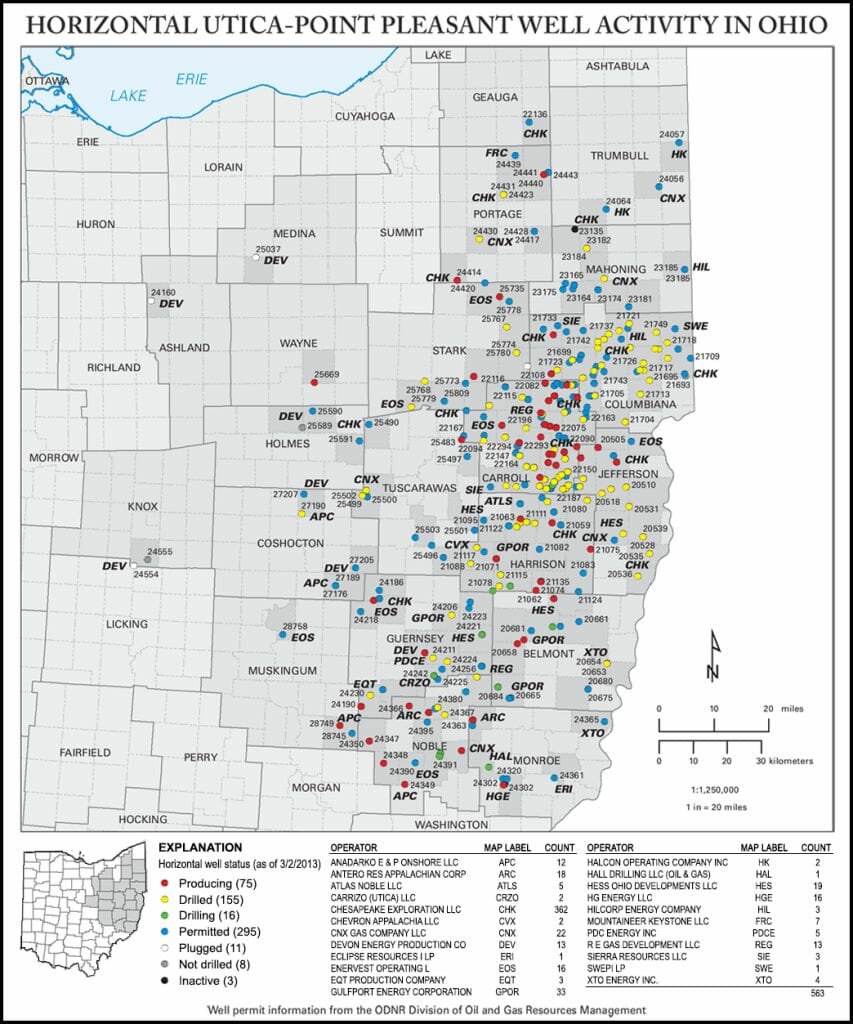 The agency said that as of March 9, it has cumulatively approved 567 permits for oil and natural gas wells in the Utica Shale. Of those permits, ODNR said 268 wells have been drilled and 76 wells are in production. There are also 35 drilling rigs currently deployed in the state.

Carroll County continued to lead the field in terms of permits issued with 216, or 38.1% of the 567 permits issued in total. When combined to form a block with its five geographic neighbors — Columbiana, Harrison, Jefferson, Stark and Tuscarawas counties — ODNR data shows the area holds 72.0% of permits issued.

Harrison County had 67 permits issued, followed by Columbiana County with 66. Guernsey, Jefferson and Noble counties followed with 35, 33 and 30 permits issued, respectively, while Monroe County had 25. Rounding out the list were Belmont (19), Mahoning (16), Portage (14), Stark and Tuscarawas (13 each) and Coshocton (five) counties.

Holmes, Muskingum and Trumbull counties each had three permits issued, Knox County had two and Ashland, Geauga, Medina and Wayne each had one.

Carroll County led in terms of production, too, with 39 of the 76 currently producing wells, or 51.3% of the total. Harrison and Noble counties followed with six producing wells each, Guernsey County had five, and Columbiana and Jefferson counties each had four. Belmont County had three wells, Monroe, Portage and Stark counties two apiece, and Muskingum, Tuscarawas and Wayne each had one.

Chesapeake led operators in terms of producing wells with 50 of the 76 (65.8% of total). Anadarko was in second place with six, while Gulfport followed with four wells, Antero, Enervest and Hess had three, Devon had two and CNX, HG, Mountaineer, PDC and RE each had one well.

The ODNR issued 18 permits during the week of March 3-9. Of those, 10 were in Carroll County, three were in Belmont County and two were in Monroe County. Columbiana, Harrison and Tuscarawas each saw one permit issued.

All 10 of the permits issued in Carroll County were for Chesapeake wells, with seven drilled in Loudon Township and one each in East, Perry and Union townships. Two of the three permits issued in Belmont County are for Gulfport wells in Somerset Township. The remaining permit is for a Hess well in Richland Township. In Monroe County, Antero plans to drill one well in Seneca Township, while XTO will drill one well in Center Township.

The Columbiana and Harrison county permits are also for Chesapeake, for wells the company plans to drill in Franklin and Rumley townships, respectively. CNX plans to drill one well in Tuscarawas County’s Clay Township.