Ohio’s unconventional oil and natural gas production declined sharply in the first quarter as operators grappled with a challenging period in which energy demand crumbled due to the coronavirus pandemic and commodity prices followed with a historic decline. 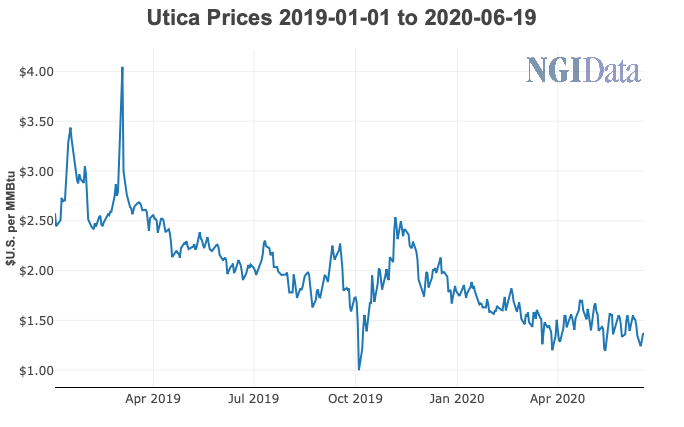 Unconventional natural gas production, driven almost entirely by volumes from the Utica Shale, was 581.6 Bcf during the period, down 15% from the 684.8 Bcf reported in 4Q2019, according to the Ohio Department of Natural Resources (ODNR). Unconventional oil production, also largely from the Utica, declined by 13% over the same period and came in at 5.8 million bbl.

Year/year figures were a bit different, as unconventional gas production dropped by 5% from 1Q2019 and oil production increased by 16%. Operators also faced headwinds early last year as they curbed spending and some production as investors searched for better returns and gas prices were low.

But 1Q2020 saw significant production curtailments and spending cuts as operators in Appalachia and across the country grappled with the pandemic’s fallout. Appalachian producers shut in both wet and dry gas production. The belt tightening came on top of plans to cut spending heading in 2020 given surplus U.S. gas supplies and stagnant prices.