Ohio Speaker of the House Larry Householder was arrested Tuesday and charged in a federal racketeering conspiracy for his alleged role in helping to pass legislation last year to provide subsidies for two nuclear power plants operated by FirstEnergy Corp. subsidiaries. 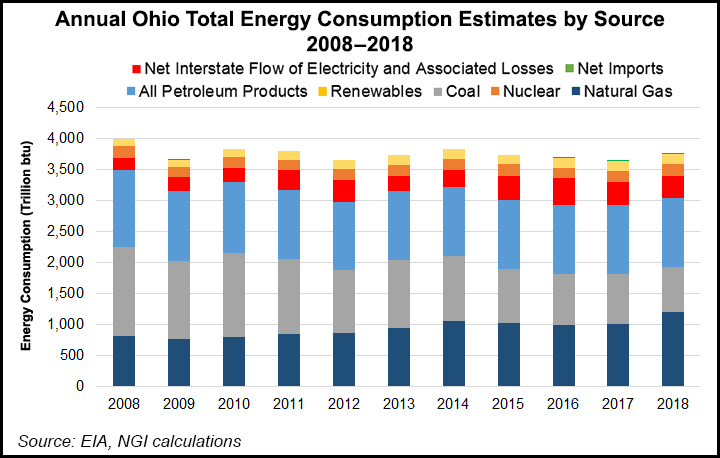 An 80-page criminal complaint filed by the U.S. Attorney’s Office for the Southern District of Ohio that was unsealed Tuesday said Householder and four others received millions of dollars in exchange for helping to pass House Bill (HB) 6, which the oil and natural gas industry fought for years, and to defeat a ballot initiative to overturn the legislation. It’s alleged that Householder conspired to violate the racketeering statute through wire fraud and received millions in bribes and money laundering.

The complaint alleges that $60 million was funneled by an undisclosed energy company into Generation Now, a special interest group established to promote energy and economic development, to help with defeating the $1 billion bailout.

HB 6 would provide $150 million to FirstEnergy Solutions Corp.’s Davis-Besse and Perry nuclear facilities for seven years beginning in 2021. It also would provide $20 million for solar facilities. The funds would come through a monthly surcharge from 2021-2027 ranging from 85 cents for smaller residential customers to $2,400 for larger industrial customers. The bill would collect $50 million for two coal-fired plants in the state through another ratepayer charge.

FirstEnergy, which fought for the legislation for years, said Tuesday it intends to cooperate in the probe.

For more than two years, the natural gas industry waged a battle to stop the subsidies from passing, arguing that they would undermine the wholesale power markets by depressing energy prices and putting gas-fired generators and others at a competitive disadvantage. Low-cost gas supply from the Appalachian Basin has made it difficult for nuclear and coal facilities to compete in Ohio and other states, where similar legislation has propped up faltering nuclear power plants.

According to the complaint, Householder received more than $400,000 in personal benefits from the payments to Generation Now, including funds to settle a personal lawsuit, costs associated with a residence in Florida, and to pay off credit card debt.

Generation Now also reportedly paid $15,000 to an individual to provide insider information about a failed ballot initiative to overturn HB 6 and offered to pay signature collectors for the referendum $2,500 and airline fare to prevent gathering signatures, according to an affidavit.

Ohio Attorney General Dave Yost and Republican Gov. Mike DeWine, along with others in the legislature, called on Householder to resign. He was elected speaker earlier this year after returning to the legislature in 2017. He was previously speaker from 2001-2004, but stepped down because of term limits.