Ohio’s horizontal Utica and Marcellus shale wells produced more than 4.4 million bbl of oil and about 183.6 Bcf of natural gas in the first quarter, according to newly released data from the Ohio Department of Natural Resources (ODNR). 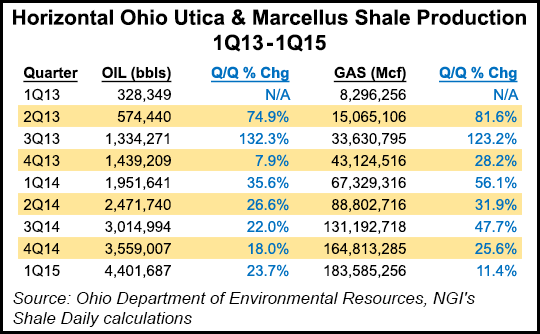 Both unconventional oil and natural gas were also up significantly from 1Q2014, when producers reported 1.2 million bbl of oil and 67 Bcf of natural gas. The latest report lists 926 wells, 877 of which reported production, a 12% increase from the fourth quarter. Forty-nine wells reported no production and were waiting on pipeline infrastructure.