Production wasn’t the only thing that increased in Ohio’s oil and natural gas fields last year, as permitting bounced back from the lows of the commodities downturn and shale drillers that increasingly control more land continued extending their laterals, according to the Ohio Oil and Gas Association’s (OOGA) annual Debrosse Memorial Report. 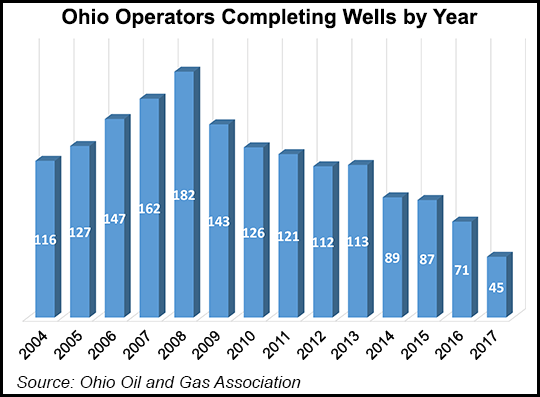 The report showed that the state issued 931 permits last year, up from 561 in 2016, when permits dropped elsewhere in the Appalachian Basin, as exploration and production (E&P) companies were still grappling with the steep decline in oil and natural gas prices.

Martin Shumway, technical officer at Locus Bio-Energy Solutions LLC, who presented the report, said most of the permits were issued in southeast Ohio, where 672 were secured for Utica/Point Pleasant wells. Another 165 permits that Shumway said would likely be Utica Shale wells were for the deeper Trenton Limestone. Thirty-six permits were issued for the Clinton Sandstone, 31 for the Knox Group and the rest for a variety of other formations.

Combined conventional and unconventional natural gas production in Ohio increased 23% year/year in 2017 to about 1.8 Tcf. Nearly all of the total, about 1.7 Tcf, largely came from Utica wells. Combined oil production declined about 6% to 19.5 million bbl, as the state’s dominant unconventional producers focused on their drier acreage. The Utica primarily accounted for 16.4 million bbl of oil.

“Taking a look back, historically, in 1990, the conventional wells in Ohio produced about 121 Bcf per year,” Shumway told the crowd. “Moving forward, there was a pretty steady decline on the conventional wells, and then, in about 2012, when the horizontal [Utica] wells started to come online, there’s been absolutely phenomenal production growth.”

The state’s unconventional wells continue to get longer, as they have across the basin. “The average footage per well is increasing, so we’re drilling longer laterals in the same formations,” Shumway said. Last year, the average footage per well in Ohio was 16,263 feet. That’s compared to 14,206 feet in 2016 and only 4,192 feet in 2011, when producers reported the first commercial Utica Shale production. Average footage/well includes the total drilled from surface to total depth and factors in both vertical and horizontal wells.

Operators across the country have been targeting their core acreage in recent years, focused on optimizing development with longer laterals and shorter stage spacing. Eclipse Resources Corp., for example, which was an Ohio pure-play until late last year when it acquired Utica assets in north-central Pennsylvania, has touted its “super lateral” program. The company’s lateral lengths averaged 13,600 feet in 2017, with eight stretching beyond 19,000 feet.

On the drilling and completion (D&C) side, Ascent Resources LLC overtook Chesapeake Energy Corp. to lead Ohio with the 79 wells it finished last year, according to the Debrosse report. Ascent was a Chesapeake spinoff. Chesapeake completed 58 wells and Gulfport Energy Corp. rounded out the top three for D&C activity with 47 wells.

Ascent is the largest firm capacity holder on the Rover pipeline, with 1.1 Bcf/d committed to the 3.25 Bcf/d project. It was scrambling last year to fill that capacity. Rover entered partial service at the end of 2017 and is expected to enter full-service in the second quarter.

Belmont, Monroe, Jefferson, Harrison and Guernsey counties led the state in completions last year and also had the most active wells.

There were 45 upstream operators working in Ohio during 2017, compared to 121 in 2011 as Utica development was ramping-up.

Larger shale producers such as EQT, Antero Resources Corp. and Southwestern Energy Co., among others, have consolidated their positions across the basin in recent years, blocking up more acreage for longer laterals.

Knobloch said 14 companies, working in 16 counties across the basin, currently account for 75% of all the producing unconventional wells. Washington County in southwest Pennsylvania led the way with 1,405, followed by Susquehanna County in northeast Pennsylvania with 1,206 and nearby Bradford County with 1,129.

Knobloch added that there are 11,600 producing wells across the basin. Not surprisingly, he said, the Marcellus Shale accounts for about 73% of those, according to his firm’s research.

“I don’t know that that ratio is going to change a lot in the future, but I do believe we’ll continue to see more activity in other formations.”