The Ohio Department of Natural Resources (ODNR) said 87 wells in the Utica Shale collectively produced 12.84 Bcf of natural gas and more than 635,000 bbl of oil in 2012. 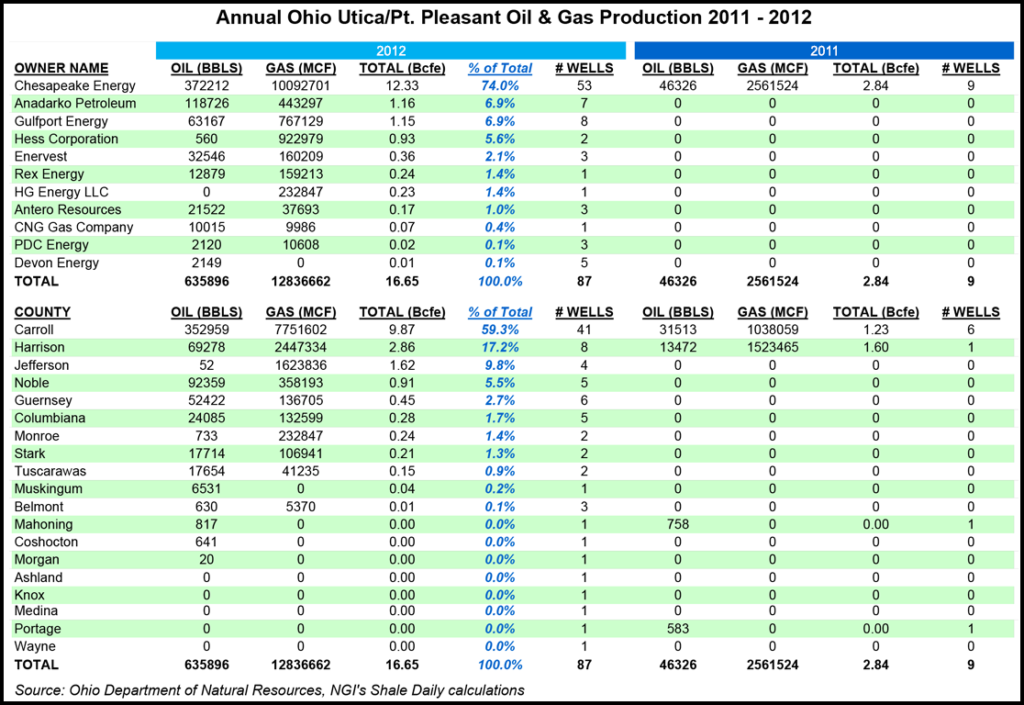 According to the ODNR, oil and gas production has increased 93% and 80%, respectively, since 2011 (see Shale Daily, April 3, 2012). At that rate, the agency predicts Utica Shale production will exceed the annual output from the state’s nearly 51,000 existing conventional wells as early as 2015.

“We believe Ohio is now at the beginning of a historic era of oil and gas production,” ODNR Director James Zehringer said during a “State of the Play” press conference in Columbus on Thursday. He added that production totals “from these initial Utica wells make a compelling statement about the staggering amount of oil and gas resources Ohio’s shale appears to contain.”

Of the 87 wells in the Utica with reported production, the ODNR said 65 were commercial producing wells. Another 19 wells were tested and then subsequently shut in. The agency said 17 of the 19 wells not placed into production “did report incidental volumes of crude oil and natural gas that were recovered during flowback of hydraulic fracturing fluids.”

The ODNR said operators also drilled three dry holes in the play, which were subsequently abandoned. The agency said none of the 87 wells on the production list produced oil and gas for the entire calendar year.

Chesapeake Energy Corp.’s operator in the Utica, Chesapeake Exploration LLC, eclipsed all others in terms of gas production with 10.1 Bcf, or 78.6% of the total. Two Hess Corp. operators — Hess Ohio Developments LLC and Hess Ohio Resources LLC — combined to come in a distant second with 923.0 MMcf. Gulfport Energy Corp. came in third at 767.1 MMcf.

The ODNR said gas was produced at 82 wells in the Utica Shale, with production volumes equal to approximately 16% of the total gas produced in Ohio in 2012. The agency said about 50,000 conventional wells produce gas in the state.

“Markets and pipeline capacity are limited, so production is likely choked back,” ODNR said of the Utica gas production figures. “Once processing plants are up and running, the produced wet gas volumes will dramatically increase. Gas production is significant, even with the early production numbers from wells that are restricted due to market conditions.”

“The reported volumes of oil are lower than initially estimated but higher than conventional non-shale oil wells,” the ODNR said. “Oil production will be incidental to gas production in much of the Utica/Point Pleasant play. Reported oil volumes likely include condensate volumes. Overall shale oil production from 82 wells represents approximately 12% of the total oil produced in 2012.”

The ODNR also reported that operators produced 688,458 barrels of brine in 2012. The agency said most of the brine was recovered during flowback from hydraulic fracturing (fracking) operations.

During his remarks, Zehringer made certain to compliment the oil and gas companies developing the Utica. “Our goal is to protect the health and public safety of Ohioans and the environment,” Zehringer said. “Our regulations are based on science, not emotion or politics. We have some of the most comprehensive and tough regulations in the country.

“The majority of companies coming in to develop the Utica have not only complied with but have exceeded a lot of these standards. These companies have shown their desire to be good stewards of the environment and business partners to our state.”