Ohio’s unconventional oil production bounced back in the second quarter, reaching 4.5 million bbl, an 11% increase from the year-ago period, according to data released by the Ohio Department of Natural Resources (ODNR). 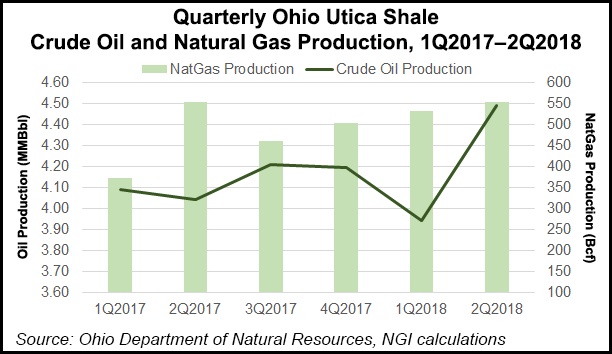 Oil volumes were also up from 1Q2018, when they came in at 3.9 million bbl. Oil production has fluctuated over the last several quarters, reflecting a broad shift to dry gas production that occured about two years ago across much of the Appalachian Basin when oil prices were lower. But operators have returned to wetter areas in Ohio and elsewhere in the basin, stoked by higher oil prices.

Unconventional natural gas production, meanwhile, continued to climb, setting a new record. ODNR said. Driven by the Utica Shale, gas production was 554.3 Bcf in the second quarter, up from 389.7 Bcf in the year-ago period and 531.3 Bcf in 1Q2018.