Oil and natural gas production in Ohio’s Utica Shale declined in the first quarter as operators pared activity heading into the year in response to a variety of factors that are likely to see the trend continue. 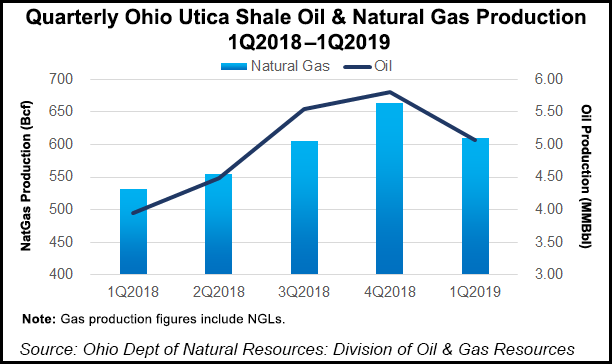 Utica gas production came in at 609.5 Bcf during the first three months of the year, down 8% from a record set in 4Q2018, according to data released Friday by the Ohio Department of Natural Resources. Sequential oil production, meanwhile, also declined by 13% to about 5 million bbl. Ohio law does not require separate reporting for natural gas liquids or condensate, which are included in the oil and gas totals.

Year/year first quarter oil and natural gas production was up by about 29% and 15% respectively, but the quarter/quarter declines were in line with the restrained growth that also occurred in Pennsylvania during the period.

Natural gas volumes across the Appalachian Basin have increased exponentially over the last decade, going from about 2 Bcf/d in 2010 to their current level of roughly 32 Bcf/d. Prudent investors searching for better returns, the commodity price outlook and a slowing pipeline buildout are expected to curb growth in Ohio, Pennsylvania and West Virginia in the coming years from double-digit heights to a more modest single-digit pace.

In Ohio, leading operators have also signaled a shift in focus. Antero Resources Corp., for example, stopped drilling in the state last year in favor of wetter acreage in West Virginia. Gulfport Energy Corp. has indicated that it plans to shift capital from the Utica to the South Central Oklahoma Oil Province, aka the SCOOP, where liquids can fetch higher returns. Others, such as Montage Resources Corp., are more focused on the Utica’s liquids window as natural gas remains challenged.

The state has issued 3,093 horizontal Utica permits, and 2,601 Utica wells have been drilled.