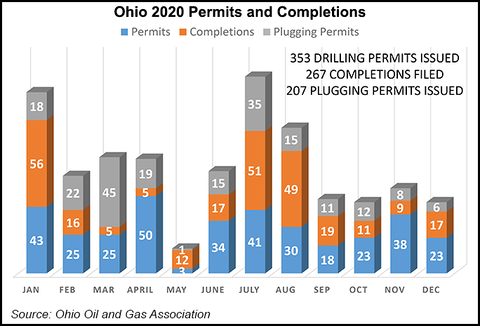 Natural gas production fell by 10% year/year to 2.4 Tcf in 2020, according to estimates included in the report. Oil production fell 16% over the same time to 23.2 million bbl after setting a record in 2019.

The pandemic curbed energy demand across the country and the world, which sent prices lower and forced oil and gas operators to slash activity and make price-related curtailments across Appalachia and the nation’s other leading fields.

Permits issued by the state fell 25% last year to 353. The Utica Shale continued to dominate drilling programs in Ohio, accounting for 313 of the permits issued, while shallower legacy targets like the Clinton Sandstone accounted for the remainder.

Completion activity also fell as operators deferred activity during the virus-induced slump. OOGA’s report said there were 267 completions in 2020, down 34% from 2019. Roughly 80% of all completions were for horizontal wells.

Jefferson, Belmont, Monroe, Harrison and Guernsey counties accounted for 80% of all completions and wells drilled in the state last year.

Meanwhile, Ascent Resources Corp., Encino Energy LLC and an affiliate of Southwestern Energy Co. were the top three most active operators. They accounted for nearly 70% of all wells drilled in the state during 2020.

The number of producers operating in Ohio has continued to decline, going from 41 in 2019 to 31 in 2020, according to the report. Before the Utica land rush got underway in 2008, there were more than 180 exploration and production companies working in the state, but that number has declined every year since as assets in the basin have been consolidated by dominant operators.