Republican leaders from the Ohio House of Representatives and Senate on Tuesday announced the formation of a joint legislative task force that would work toward a compromise to increase the state’s severance tax on unconventional oil and natural gas production. 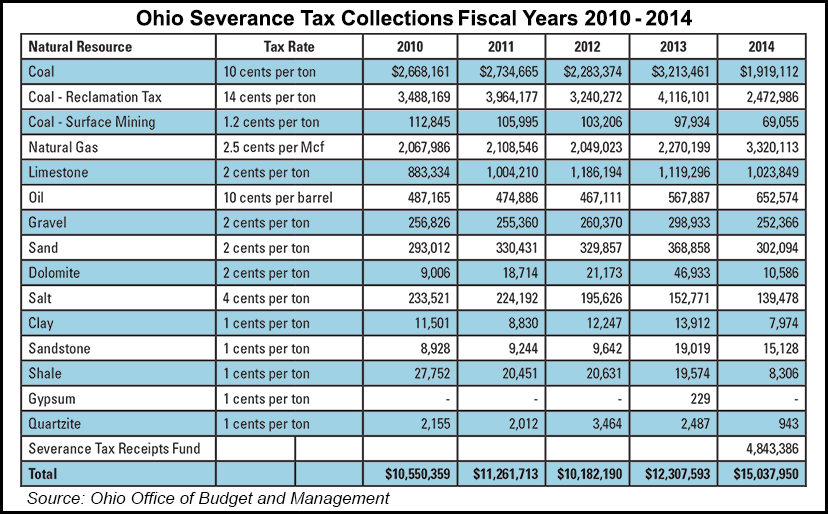 The general assembly has been debating an increase in the severance tax for years without a solution, as production from the Utica Shale has continued to increase. But Tuesday’s announcement was the first time lawmakers pledged to confront the issue head-on, saying the task force had an Oct. 1 deadline to recommend a fair severance tax for the legislature to vote on.

“One of the things I think you need to take from this is, one: the deadline is a hard deadline,” Senate President Keith Faber told reporters during an impromptu press conference at the capitol. “There was a lot of discussion about whether this was just a stalling tactic…Make no mistake, there’s going to be a solution to this problem. And lest one side think that they can drag it out or extend the ball; that’s not an option, because there will be a solution next time.

“The goal is to find a solution for everyone.”

The task force would consist of three members from each chamber — two Republicans and one Democrat — as well as Director of the Ohio Office of Budget and Management Timothy Keen.

The announcement came as a surprise to some. With the task force preparing to move ahead on a comprehensive severance tax proposal, the state’s two-year budget, which is expected to head to conference on Friday, will not include it, Republican leaders said.

Last week, a compromise to pass a new severance tax in the the state budget seemed out of reach (see Shale Daily, June 8). But with time still left before a July 1 deadline to pass the budget, some lawmakers felt it had a chance to be included.

“I was just waiting to see. I was told there was going to be a severance tax included in [the budget] and now all of the sudden it’s not to be,” Senate Minority Leader Joe Schiavoni told NGI’s Shale Daily. “I think that this issue has been thoroughly debated. I’m not sure there’s a need for a study commission. It seems like kicking the can down the road on the severance tax.”

American Petroleum Institute of Ohio Executive Director Christian Ziegler said his organization remains opposed to any increase, adding, however, that “without arbitrary deadlines, we are confident long-term policy solutions can be achieved.”

“While we remain opposed to an increase in the severance tax rate, especially during this extremely difficult commodity price environment, we are open to continuing discussions on this issue,” said Ohio Oil and Gas Association Executive Vice President Shawn Bennett. “…It is apparent that a more thorough and deliberative discussion is needed to examine the state’s overarching tax policies.” (*corrected)

In February, Republican Gov. John Kasich proposed taxing unconventional oil and gas volumes at a rate of 6.5% (see Shale Daily, Feb. 3). That was his highest proposal yet, floated to offset a plan to cut income taxes by $5.7 billion. Since taking office in 2011, Kasich has proposed several severance tax increases ranging from 1.5% to 4.5%.

Neither the House nor the Senate, however, included his proposal in their versions of the state budget, focusing instead on a more modest income tax cut and fewer tax reforms. Last year, the state House passed HB 375 to tax unconventional oil and gas production at 2.75% (see Shale Daily, May 15, 2014). That bill was supported by the industry, but stalled in the Senate (see Shale Daily, Nov. 19, 2014).

Faber said the latest round of negotiations had been productive, and he added that leadership decided to act on Rosenberger’s proposal to form a committee for in-depth tax study rather than work on the issue under the pressure of passing the state budget (see Shale Daily, April 15).

Faber said that neither Kasich’s proposal nor HB 375 would serve as a starting point for the task force. Sen. Bob Peterson added that West Virginia’s severance tax rate of 5% could be a good model for Ohio.

“We’ll step back to go forward. [HB 375] is a good base, but I think the West Virginia model is a model that we spent a lot of time working on. I think Sen. Balderson has read every tax plan of every state over the last few months,” Peterson said, referring to Chairman of the Senate Energy and Natural Resources Committee Sen. Troy Balderson. “There’s a lot of options. I think ultimately, we’re going to come up with a plan that’s simple. I think it will have a higher rate.”

Ohio has one of the lowest oil and gas severance tax rates in the country. Producers currently pay 20 cents/bbl for oil and 3 cents/Mcf for natural gas, according to the Ohio Department of Taxation.

“Updating this outdated tax policy remains a top priority for the administration, especially since new technologies in recent years have completely transformed this industry,” said Kasich spokesman Rob Nichols. “We’re obviously disappointed with the delay. We need to move forward with what’s best for Ohio.”

Schiavoni said he didn’t know if a different severance tax proposal would pass the legislature by the end of the year, adding that “I think I would be out of line to say it would pass relatively quickly.” He said he wasn’t concerned about the rate, but how revenues from a new tax would be distributed to impacted communities where the bulk of Utica drilling has occurred.

Republican leaders didn’t offer specifics about how revenue could be allocated, but said distribution among local communities would be a top priority.

“I can tell you that a majority of the Senate Democratic caucus wants to see the things I’ve talked about,” Schiavoni said. “It needs to be a reasonable rate that goes toward infrastructure and workforce development at the local level.”