An Ohio lawmaker from Belmont County, which has been transformed in recent years by heavy Utica Shale development, has introduced legislation that would direct more oil and gas severance tax revenues to communities most affected by drilling. 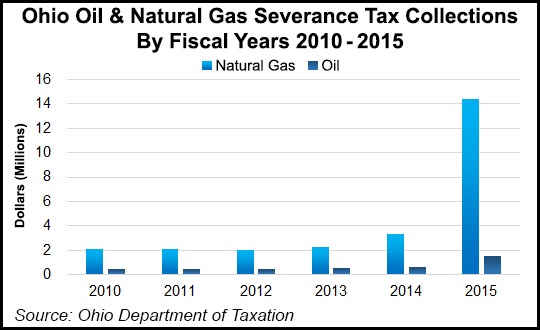 HB 540 was introduced by Democratic Rep. Jack Cera in May to help affected communities rebuild deteriorating roadways and provide for better emergency services. The bill is backed by several other Democrats and one Republican.

“Eastern Ohio’s roads and bridges are deteriorating under the weight of the increased truck traffic brought by the oil and gas industry,” Cera said. “It is only fair that a portion of the severance tax is used to restore our communities’ infrastructure. This proposal takes surplus dollars over and beyond what is needed by the Ohio Department of Natural Resources (ODNR) and sends them back to Eastern Ohio.”

According to Cera’s office, the state collected $24 million in severance tax revenue in fiscal year 2015. ODNR received $14 million of that for its oil and gas regulatory program and a fund it oversees to plug abandoned wells. Cera said the severance tax is on pace to generate more than $30 million in the current fiscal year, while ODNR’s appropriation would remain the same.

While other lawmakers have called for similar legislation in recent years that push has been trumped by unsuccessful efforts to increase the severance tax. Ohio currently has one of the nation’s lowest severance tax rates. It charges 20 cents/bbl for oil and 3 cents/Mcf for natural gas.

Cera represents one of the most heavily drilled counties in the state, where more than 300 horizontal permits have been issued. Last year, combined conventional and unconventional oil production in the state was 12 times higher than it was in 2011, when commercial shale production was first reported. Producers churned out 25.7 million bbl of oil and more than 1 Tcf of natural gas, or more than five times what was produced in 2011 (see Shale Daily,March 17).

Despite the low rate, severance tax collections have more than doubled since 2011 when the state brought in $11.6 million, according to the Ohio Department of Taxation. About 90% of the oil and gas severance tax currently goes to the well plugging fund and ODNR’s regulatory program. Tax collections from other natural resources go toward other state funds such as those for unclaimed land and coal mining administration.

Under HB 540, ODNR would keep the first $20 million of severance tax revenues each year for its regulatory program and well plugging. Cera wants 80% of the remaining funds to go toward local government and township road maintenance to help fix impacted roads and to improve safety services. Another 10% would be appropriated to the state fire marshal for grants that would help provide communities with firefighting and emergency response vehicles and equipment.

The remaining funds would go to communities with injection wells for oil and gas waste. The bill would also establish an inventory at ODNR of all known and suspected idle and orphaned wells to help plugging efforts. The provision would require an annual report to be submitted to the legislature.

Last October, a state legislative task force, charged with exploring the possibility of increasing the state’s severance tax on unconventional oil and natural gas production, issued a report that did not recommend an increase and instead cautioned that any hikes should be slowly phased in given the commodities downturn (see Shale Daily, Oct. 23, 2015). The report also acknowledged that any new revenue from an increased tax should be directed to impacted communities.

Cera’s legislation would bring the state closer in line with Pennsylvania, where producers pay a flat fee for all unconventional wells drilled in the state. The impact fee is then distributed to local counties, communities and state agencies.