As oil and gas companies continue to ponder the best strategy for unlocking natural resources in the Utica Shale — and industry analysts continue to debate the merits of doing so — data from the Ohio Department of Natural Resources (ODNR) indicate that the state has passed an important milestone: 100 horizontal wells online and in production. 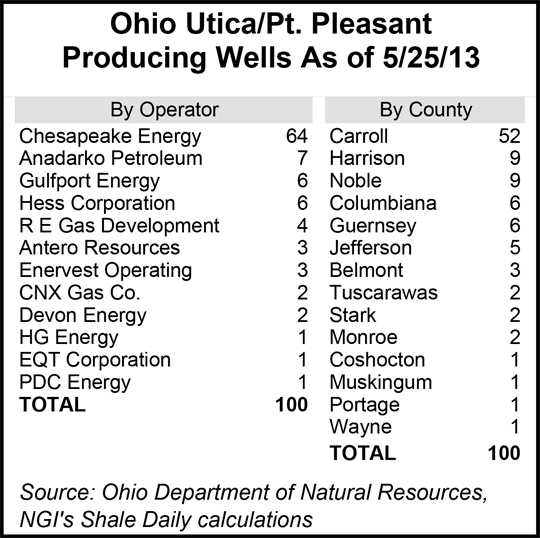 According to the ODNR, as of May 25, 686 permits have been issued for drilling horizontal wells targeting the Utica. Of those, 335 wells have been drilled and 100 are in production. The ODNR also said there were 30 drilling rigs deployed as of May 25.

Out of the 100 producing wells, Chesapeake Energy Corp. is the largest operator with 64, with the next three largest being Anadarko (7 wells) and Gulfport Energy and Hess Corp., each with six wells. The most active counties in Ohio are Caroll (52 wells) and Harrison and Noble, each with nine wells.

Chesapeake and Carroll County, have routinely topped the list for permits issued (see Shale Daily, April 19; Nov. 1, 2012; Aug. 16, 2012), and the latest data signaled no exception; Chesapeake received four permits to drill in Carroll County, with two for Loudon Township and one each in East and Lee townships. The remaining three permits were for wells in Columbiana County, with two in Franklin Township and one in Hanover Township. All three of Antero’s permits were for the Vorhies Unit in Noble County’s Seneca Township.

Industry experts are divided over what the 2012 production figures mean — with some expressing disappointment that there isn’t more oil, and others predicting a surge in gas and natural gas liquidsproduction (see Shale Daily, May 24; May 20). However, a consensus appeared to agree that producers were determining where the sweet spots for oil are located.