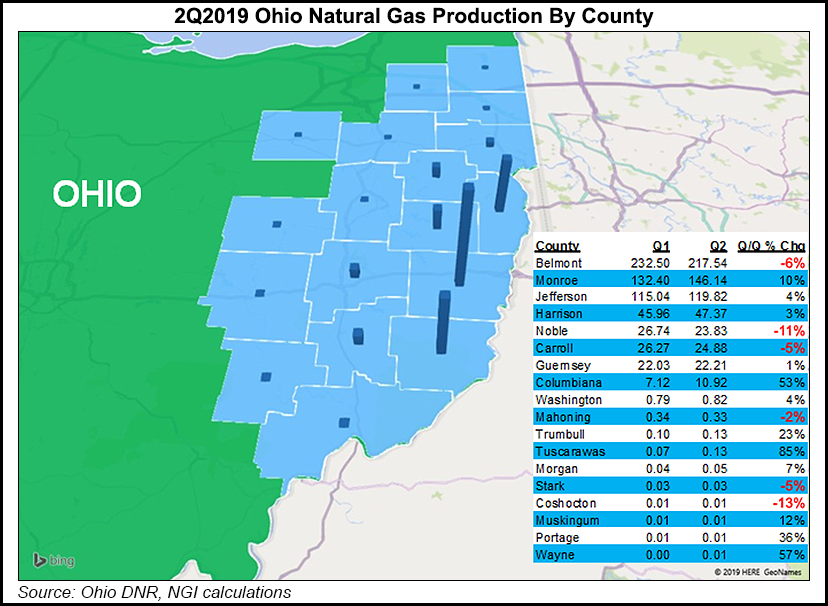 Year/year natural gas production was up to 614.2 Bcf in 2Q2019 from 554.3 Bcf in the year-ago period, an increase of about 11%, according to data released Tuesday by the Ohio Department of Natural Resources (ODNR).*

The gain was smaller compared to the 609.5 Bcf produced in 1Q2019, when both oil and gas volumes declined heading into the new year as exploration and production (E&P) companies began implementing plans to curb activity.

Unconventional oil production increased by about 30% year/year to reach 5.8 million bbl in the second quarter. Oil volumes were also up slightly from about 5 million bbl in 1Q2019.*

E&Ps across the country are facing tough decisions.

Commodity prices are volatile, takeaway is limited in some parts of the Lower 48 and broader concerns over the U.S. trade war with China are roiling the industry. Producers in Appalachia have been particularly hard hit as surging gas supplies have outpaced demand. Appalachian operators have responded to persistently low gas prices with plans to cut spending and grow production more modestly than in years past when volumes soared.

The bulk of unconventional volumes reported to ODNR is primarily produced in the Utica Shale, but there is limited Marcellus Shale development too. Ohio law does not require separate reporting for natural gas liquids or condensate, which is included in the oil and gas totals.

The agency’s latest report lists 2,365 horizontal wells, of which 2,317 reported oil and gas production during the second quarter. The average amount of oil produced by each well was 2,509 bbl, along with 265 MMcf natural gas.

ODNR has issued 3,148 Utica permits, and 2,678 wells have been drilled since development in the play started. That compares with the 2,873 permits issued and 2,402 Utica wells that had been drilled through the same period of 2018.

*Clarification: The original version of this story included incorrect year/year percentage gains in unconventional oil and natural gas production because of a data reporting error by the Ohio Department of Natural Resources. The figures have been changed to reflect the state’s revised figures.