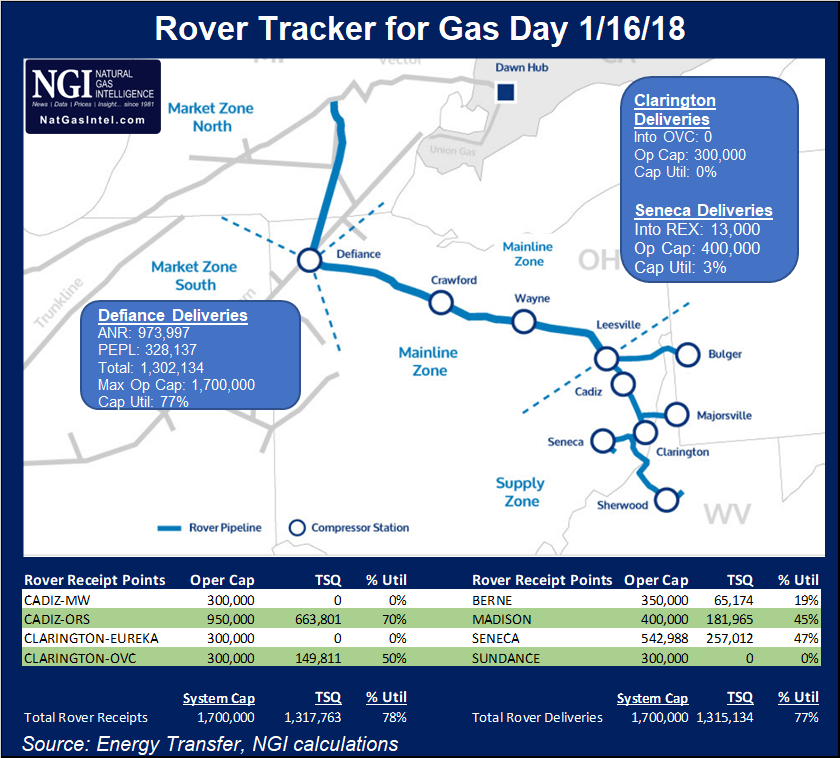 In a letter sent last Thursday to Rover sponsor Energy Transfer Partners LP (ETP) and FERC, Ohio EPA cited a recent “loss of returns associated with the pilot hole installation in Stark County at the HDD under the Tuscarawas River.”

Citing information gathered during a Jan. 10 on-site inspection, Ohio EPA said 146,000 gallons of drilling fluids “have been lost down the hole,” while also noting that based on Rover’s use of “drone surveillance several times a day” and continuous monitoring of the pipeline right of way no inadvertent returns had been discovered.

Ohio EPA asked ETP to provide a detailed list of technical information related to the Tuscarawas HDD; the regulator also requested daily updates on the current location of the drill and reports on inspection of nearby wetlands, among other items.

Asked about Ohio EPA’s letter, ETP spokeswoman Alexis Daniel told NGI that the company is “working in coordination with FERC on all remaining HDDs” and is in compliance with a FERC-approved HDD contingency plan.

“We would like to clarify at this time, we have not experienced a release of drilling fluid or a ”spill’ during the installation of the second line at the Tuscarawas site,” Daniel said. “As we have said throughout the project, safety is our first priority — the safety of the community, the safety of the environment and the safety of our employees.”

Daniel also said as of Tuesday Rover was “more than 76% complete with all HDD activity and more than 99% complete on all construction activities for the project.”

Rover and Ohio EPA have clashed at times since the 3.25 Bcf/d, 713-mile pipeline began construction last year. Rover has challenged Ohio EPA’s enforcement authority over the project, and the two sides have disagreed on civil penalties and additional stormwater permitting requirements, leading the regulator to pursue legal action against the pipeline.

Following project delays and months of filings from Rover on plans to implement additional precautions and recommendations from third party engineering experts, FERC has since reauthorized all previously suspended HDD activities for the pipeline.

Last November, Ohio EPA Director Craig Butler accused Rover of committing “an unacceptable number of new violations” after restarting the suspended HDDs and suggested the operator was hurrying construction “to make up time lost” as a result of FERC’s moratorium.

ETP Senior Vice President Chris Sonneborn, in charge of engineering, responded that Rover was in compliance with all FERC and Ohio-approved HDD plans. Sonneborn noted that most of the inadvertent returns Ohio EPA cited in November occurred at the same location.

“The geology of the region is such that if an inadvertent return has occurred in an area, it is highly likely that additional inadvertent returns will occur in the same area,” Sonneborn wrote in November. However, in incorporating recommendations from FERC and third-party engineering consultants, Rover “amended the drilling plans for the remaining HDDs to reduce the likelihood for inadvertent returns, and increased the frequency and expanse of inspections during drilling operations.”

Rover started up Phase 1B last month to increase its east-to-west to capacity to about 1.7 Bcf/d. For Tuesday’s gas day, the pipeline was flowing slightly more than 1.3 Bcf/d from receipt points in eastern Ohio to interconnects with ANR and Panhandle Eastern in Defiance, OH, according to NGI‘s daily Rover Tracker.

Rover plans to bring the full project into service — including access to the Dawn Hub in Ontario — by the end of March.