Part one of a two-part NGI report (Part Two). 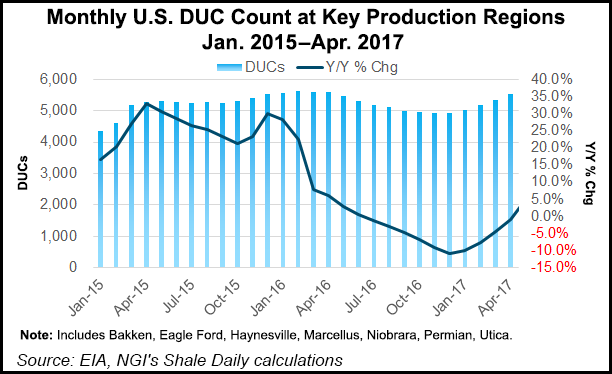 As drilling activity runs rampant in lucrative plays like the Permian Basin, oilfield service (OFS) costs are expected to rise to levels that could take producers by surprise, leaving future production on a choppy path toward growth, some analysts say.

While many producers have been expecting a rise in oilfield service (OFS) costs (including, but not limited to the cost of rigs, pressure pumping and transportation) of around 10-15% from 2016 levels, some analysts are saying actual costs in 2017 could come in more than 20% higher and up to 30% higher from 2016 levels in 2018.

However, Kathryn Miller, a partner at BTU Analytics and managing director of analytics and consulting services, said the 20% increase in drilling and completion costs should not cause too much concern for producers in the near term.

“A 20% rise in drilling and completion costs moves breakevens roughly $5/bbl in the Permian Basin,” she said. “So the spread on service costs coming in 10% higher than expected has a minimal impact on breakevens or activity in the near term, particularly because many of the larger operators have locked in services for 2017.”

BTU is projecting 3.5 Bcf/d of gross natural gas growth by year-end and an incremental 6.5 Bcf/d one year from now. “It sounds like an obscene amount of growth, but you only have to look back a few years to see that production ramps of 4 Bcf/d-plus over 12 months aren’t unprecedented,” she said.

Meanwhile, analysts at Wells Fargo Securities LLC agreed OFS costs could be kept at bay for the near-term, but said that exploration and production (E&P) profiles are weighted to the second half of the year as bigger completions and pad drilling trends have put more lag time between when drilling begins and first production. That would set up strong growth from the second half of 2017 and into 2018.

“For now, we expect E&Ps to stick to original 2017 plans, but we still see potential spending hikes later in the year given back-half-weighted growth profiles” along with more clarity this week from the Organization of the Petroleum Exporting Countries (OPEC) when it meets, Wells Fargo analysts said earlier this month.

OPEC and some of its allies, including Russia, are scheduled to meet on Thursday to discuss whether to extend an oil production reductionthat was put in place on Jan. 1. At the meeting, OPEC is expected to renew its decision to reduce production by more than 1 million b/d through 2017. In mid-May, Russia joined with lead OPEC member Saudi Arabia in calling for reductions to be extended through March 2018.

The increased spending and activity in the second half of the year should drive up OFS costs as well, Wells Fargo said, especially as logistics such as the availability of rigs and completion crews tighten. The bank warned the constrained environment should be something to watch closely in the coming quarters.

“Reflecting our expectation for more aggressive cost hikes, we forecast outspending levels for the group 8% and 18% higher than consensus in 2017 and 2018, respectively,” Wells Fargo analysts said last month.

Indeed, the availability of rigs and completion crews and equipment are partly behind the rise in service costs. Completion crews, in particular, are already causing concern for some producers that are finding themselves unable to get the completion crews necessary to hit their growth targets in 2018 and beyond, Miller said.

Halliburton Co., the No. 1 pressure pumping provider in North America, remains confident in its manpower as the company retained many of its employees during the downturn, management said in April during the first quarter conference call. At the height of the surging unconventional growth in 2014, the Houston-based OFS hired 21,000 people only to announce massive layoffs in the next two years. Because Halliburton builds its equipment, it has the luxury of waiting longer than some competitors to make newbuild decisions. Management recently indicated it does not plan to refurbish equipment until prices rise nor add North American fracturing (fracking) crews until the fall at the earliest.

Meanwhile, Pioneer Energy Services CEO Stacy Locke said, “We’ve done a great job of being able to crew those rigs up without too much difficulty, but on the production service side, labor is tight and it’s a competitive market, and I think all of us are struggling with that.”

Sold-out completion equipment is another issue, one that is being partly blamed for the growing number of drilled but uncompleted wells (DUC) in the Permian, according to Evercore ISI’s James West, senior managing director.

As producers make a mad dash to the Permian, they take with them a flight of hydraulic horsepower (hhp) from other nearby basins to try to meet incremental demand in the Permian, he said. The building inventory of DUCs, which is approaching peak January ’16 levels, is a function of sold-out completion equipment and increasing lead times. The continued increases in drilling efficiencies and pad-adoption in conjunction with the rapid rig count ramp have only served as a further tailwind for hhp demand, he added.

West said the growing DUC inventory presents a future revenue opportunity, but also suggests that many contractors will have to accelerate reactivations, thereby incurring higher-than-expected costs and pressuring near-term margins. This dynamic will likely also serve to accelerate pricing, but could introduce choppiness to 2017 estimates, especially given the natural lag between spuds and completions.

“We believe service cost inflation from entry 2017 to exit 2017 will be in excess of 30% with completions-related technologies garnering the largest increases,” West said. “This will likely impede some production growth.”

Meanwhile, the availability of rigs themselves is also something producers are watching. During the week ending May 19, the Baker Hughes Inc. (BHI) U.S. land-based rig count climbed by 14 units to 874. The Permian rig count grew by four, and the Haynesville Shale added one unit, reaching the milestone of 40 rigs running, which is well above the 14 it had one year ago. The Marcellus Shale added two rigs and the Utica Shale added one.

“Rigs peaked around 2,000 in 2014 and are roughly 900 now, so we are far from full utilization,” said Genscape Inc.’s Ben Chu, manager of equity products. “So you can understand how completions costs can increase more, not too surprising since this recovery has been all about horizontal drilling, while overall well costs are only up 10-15%.”

Genscape’s Drilling Economics Cost Index shows a 5% increase since bottoming in March 2016. Recent gains include well services and frack sand, while personnel costs had recovered to early 2015 levels in October (up 10% from bottom), where they are stabilized now.

And although high tech rigs, aka “super specs” are nearly sold out, with their capacity utilization rate estimates anywhere between 90-100%, there are still plenty of idled rigs on the sidelines that can be upgraded to super spec capacity fairly quickly, and at relatively little expense, according to NGI’s Patrick Rau, director of commodity research. That means the “effective” availability of land rigs is still fairly high.

“To put this into context, Helmerich & Payne Inc., one of the leading land drillers, still has 50 idle rigs in the Permian area, which of course is the hottest play in the world right now,” Rau said.

It’s no secret, however, that such rampant growth is unsustainable. So while the rig count is expected to continue climbing, the pace is expected to slow. OPEC’s decision on extending its production cuts also may affect the number of rigs added going forward.

Nabors Industries Ltd. CEO Tony Petrello during a first-quarter earnings conference call held in April said the Houston operator had “again surveyed our largest Lower 48 customers” clients that “represent over 30% of the total rig count. Of those, nearly 75% have plans to add rigs between now and the end of the year for an increase of over 15%.”

Meanwhile, the unavailability of frack spread equipment is also leading to some shuffling of resources. Chu said he was aware of an example where equipment was pulled from Appalachia and a penalty paid to the operator, in order to move that equipment to the Permian.

“So while signs of tightening are there, I would add that the major service companies, like Schlumberger Ltd., have all mentioned mobilizing frack spreads currently cold stacked as the market demands, so there is some overhang of equipment that can be made available at cold-stack to mobilization economics,” he said.