Demand for large-diameter offshore pipelines, aka trunklines, is expected to drop by 26% in 2020 before rebounding to near pre-Covid levels by 2022, Rystad Energy forecasted Monday. 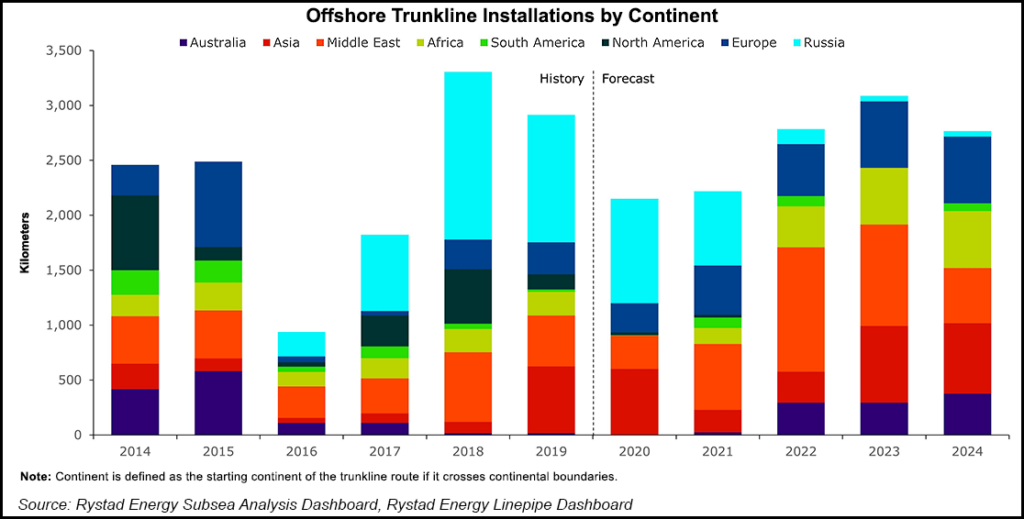 Natural gas pipelines account for more than 90% of the nearly 100 offshore trunkline projects slated for development from 2020-2024, Rystad analysts said.

“The offshore trunkline market will recover to its prior levels in the next few years, driven by a handful of large transmission lines between regional markets and numerous export lines from upcoming offshore gas field developments,” said Rystad’s Henning Bjørvik, energy service analyst.

The Rystad team highlighted that the trunkline market is divided into two segments: export trunklines connected to upstream processing or production facilities, and downstream transmission lines used to transport gas between regions and markets.

Transmission lines account for about half of new trunkline demand forecasted through 2024 in terms of length, researchers said, but in terms of project count, they comprise less than one-third. “As a result, alterations in the timing of a few of these can throw the market around quite a bit,” they said.

The Nord Stream 2 pipeline connecting Russia to Germany via the Baltic Sea has accounted for most of recent trunkline demand in the Europe/Russia region, with North Sea oil and gas export lines also contributing to demand, Rystad analysts said.

Just 160 kilometers (about 99 miles) of the 2,460-kilometer Nord Stream 2 still need to be placed, with construction currently halted by U.S. sanctions. Rystad expects the project to be completed in 2021.

Looking ahead, the 1,181-mile Eastern Mediterranean (EastMed) natural gas pipeline connecting gas supply from Egypt and Cyprus with European markets in mainland Greece and Italy is expected to be the largest driver of trunkline demand in terms of length, researchers said.

They noted that offshore sections of the EastMed totaling 1,340 kilometers (832.6 miles) are scheduled for installation between 2023 and 2026.

The Middle East trunkline market, meanwhile, “will continue to be dominated by export lines associated with giant offshore developments in Iran, Saudi Arabia and Qatar, while Asia-Pacific demand will be led by Australian export lines such as Barossa, Scarborough and Browse LNG,” the Rystad team said. “African projects contributing to trunkline demand include Egypt’s Mediterranean Zohr field and the Mamba development in Area 4 off Mozambique, while the Americas is the only market expected to see a decline in installations in the coming years.”

Despite the expected rebound in trunkline demand, prices for the pipes themselves are expected to remain low for the foreseeable future due to pipeline manufacturing capacity that “dwarfs” demand, said Rystad’s James Ley, senior vice president for energy service research.