The California Coastal Commission (CCC) was alerted Thursday to potential environmental impacts from the use of hydraulic fracturing (fracking) offshore along the Pacific Coast in both federal and state waters. 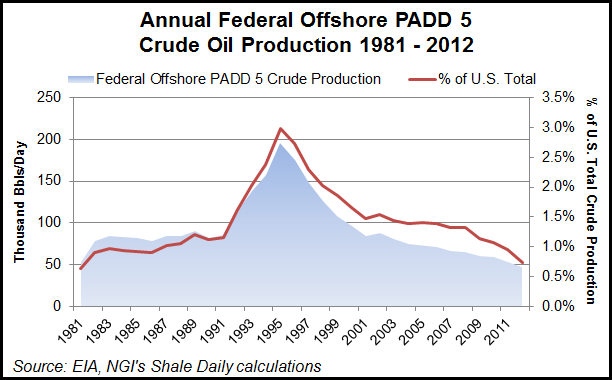 CCC staff told the 15-member coastal regulatory body that it has launched an investigation into reports that fracking has occurred in federal waters for the past 25 years and more recently in state waters.

Another branch of state government, the Division of Oil Gas and Geothermal Resources (DOGGR), is in the process of developing rules to regulate fracking onshore, and the state legislature has vetted a number of bills aimed at the oil/gas drilling process (see Shale Daily, June 3; Dec. 21, 2012).

California’s coastal regulatory staff was alerted to the issue by a series of letters from lawmakers and environmental groups, along with an Associated Press report that said a federal agency had documented at least a dozen fracking incidents taking place in federal water since a 1969 oil spill off Santa Barbara that prompted a moratorium still in place on new platforms on the Outer Continental Shelf (OCS).

Alison Dettmer, deputy director of the CCC’s energy, ocean resources and federal consistency division, said her staff has launched an investigation of offshore fracking. “We do not yet understand the extent of fracking in federal and state waters, nor fully understand its risk,” Dettmer told the commissioners. She cited some “tricky legal issues” that need to be examined.

As part of a report, Dettmer tried to explain how the state had been unaware of the offshore activity. Part of the reason may be that the federal Bureau of Safety and Environmental Enforcement has granted approvals for fracking as a “minor” change to the operators’ previously approved OCS drilling plans for 23 existing platforms in federal water. A “major” change in those plans would require state review.

For California waters, individual drilling plans are reviewed and approved by DOGGR. Over the years, the CCC has not been notified when drilling plans were approved, although the operators have to apply for “coastal development” permits. From this point forward, the CCC will ask if the development plans include fracking, Dettmer said.

“We need to better understand what these well enhancement practices are to better assess whether we believe they constitute valid coastal activity,” said Dettmer, adding that the CCC originally reviewed 13 of the 23 federal OCS plans, but the federal government only needs to consult with the state agency on major revisions to any of those plans.

Dettmer was told that 12 wells in federal waters have had some form of fracking performed on them in the past 25 years, and that compared to onshore fracking, the work offshore has been much smaller in scale, with less fracking fluid and lower pressures.

Crude oil production in Petroleum Administration for Defense District 5 (PADD 5), which includes Alaska, Arizona, California, Hawaii, Nevada, Oregon and Washington, has been in decline since it peaked at 196,000 b/d in 1995. Production in PADD 5 last year was 48,000 b/d, according to Energy Information Administration data.