The Ohio Department of Natural Resources (ODNR) expects to begin releasing quarterly oil and gas production reports in February, after a push from investors, members of the agency itself and other industry stakeholders, who called for more up-to-date figures on the pace of development in the Utica shale play last year. 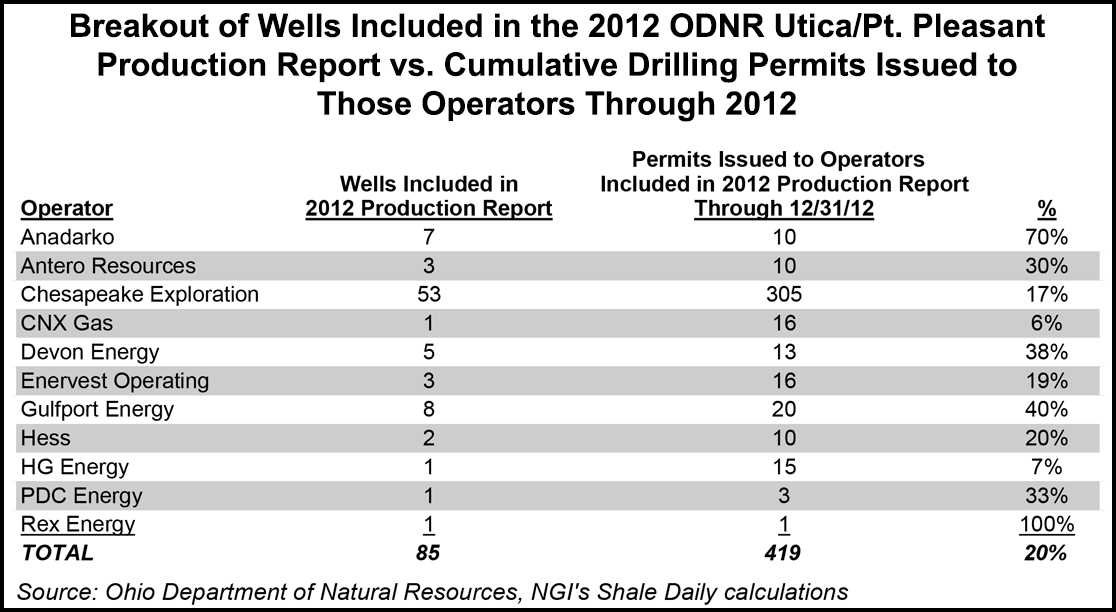 For more than a year, state regulators have fielded requests for more frequent reporting. The move comes as an amendment to Ohio’s biennial budget bill, which was signed into law by Gov. John Kasich in June. The provision was strongly considered last year, but was not included when legislators passed Senate Bill 315 — a sweeping law that reformed oil and gas policy, midstream regulations and rules for waste water disposal in underground injection wells.

Quarterly reports from Ohio’s Utica shale will bring the state closer in line with others, such as Texas and North Dakota, where regulators have published production data on a monthly basis for years. The new reporting requirements will also put Ohio one step ahead of its neighbor, Pennsylvania, which makes such data available on a six month basis.

Mark Bruce, spokesman for ODNR’s Division of Oil and Gas Resources Management, said he expects the agency to release production data for 4Q2013 sometime in February. That’s because the new law requires exploration and production (E&P) companies to submit well data up to 45 days after each quarter ends. The rule change went into effect Sept. 29.

Bruce said the companies that will report have already started to make preparations for submission and many of them track production electronically on a regular basis, making the new requirement an easy one to handle.

Previously, operators were required to submit on an annual basis for state reports that were released once a year.

As for the first three quarters of 2013, data on that time period falls under the old law, meaning reporting requirements fall under the annual provision, which calls for production data to be submitted by the end of March.

“It will be sort of a weird year,” Bruce said. “We’re going to have new data before we report on older production.”

In any event, the shift is long overdue, according to many who follow the industry closely.

“I would say more data is always preferred to less. I think the whole notion of annual data is a bit ridiculous because E&Ps already have that down to the minute,” said Mark Hanson, an energy analyst at the investment research firm Morningstar. “Annual data is not very helpful, especially in a fast moving area like the Utica. This is a positive development for people that do follow the industry. It gives us an idea of how wells are progressing and makes it easier to spot changes — there’s a lot of money riding on this play.”

Ted Auch, Ohio program coordinator for the FracTracker Alliance, which compiles data, creates maps and analyzes shale development in basins across the country, said quarterly reports are “exactly what we’ve been asking for.”

He said the reports will give both the public and private stakeholders a better idea of what’s happening on a county, local and company level.

“This will help track the production curve,” he said. “You can’t run the decline curve with only two data points from 2011 and 2012. I think this is more about money, but it will also give the public a better idea of how each company is doing and whether it’s a good idea to sign a lease.”

ODNR first made production reports on unconventional wells available in 2011. At the time, only 9 wells were reported — all of which were operated by Chesapeake Energy — and none of which were commercially producing.

When the state reported 2012 production results in May, only 85 wells were included (see Shale Daily,May 17). The 636,000 bbl of oil and the 12.84 Bcf of natural gas produced that year had many down on the Utica’s potential, but as the pace of development has continued to accelerate since then, February’s report will be widely anticipated.

The 85 wells that were included in the 2012 production report represented only 20% of the 419 total cumulative drilling permits that had been issued to the operators included in that report through the end of 2012. Part of the reason for that disparity is simply a timing issue, since not all of the permits issued toward the end of the year could be drilled and turned to sales before year end. But the low figure suggests just how raw the initial 2012 ONDR production data might have been.

Chris Zeigler, executive director of the Ohio Petroleum Council, the American Petroleum Institute’s state chapter that lobbies on behalf of the industry in Ohio, said a large part of the switch to quarterly reporting came from state regulators themselves. Zeigler said his membership was more than willing to comply.

“One big thing from our perspective is we wanted more up to date data, as opposed to the kind issued annually,” Bruce said. “It gives us a better idea of what’s happening in the state — where our staff and inspectors need to be — and where the industry is at here.”

Bruce added that ODNR will continue to work through the hiccups in this year’s reporting schedule. The agency expects to provide quarterly production reports on a consistent basis beginning in 2015. Quarterly reports will only be issued for unconventional wells. Vertical well reporting will still be conducted on an annual basis.

ODNR also plans to make upgrades to its online database. The agency updated its website earlier this year, and its database will soon allow users to pull up a particular well site with complete details about production and inspection.