The Ohio Department of Natural Resources (ODNR) has ordered Hilcorp Energy Co. to temporarily halt its operations in Northeast Ohio after a series of minor earthquakes were felt in several townships just miles from where the company has drilled seven wells and has plans for others. 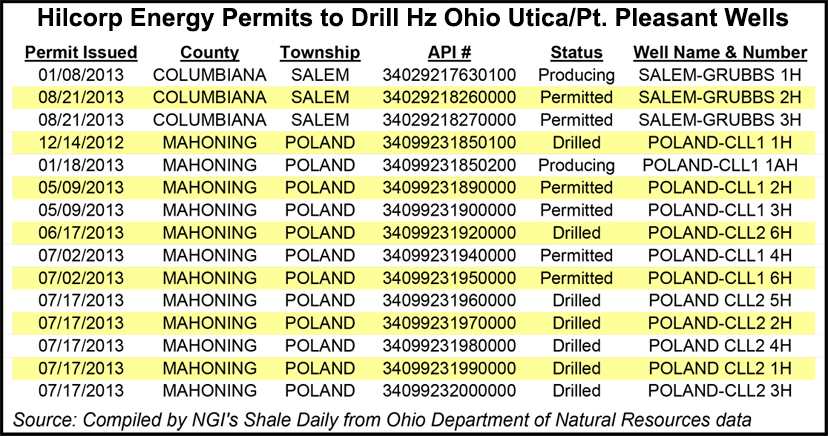 The U.S. Geological Survey recorded four earthquakes, beginning at about 2:30 a.m. EDT on Monday and ending just before Noon EDT. They ranged in size from 2.2-3.0-magnitude. The earthquakes occurred about eight miles southeast of Youngstown in Lowellville, near the Ohio-Pennsylvania state line, where Hilcorp has extensive operations at Allied Waste’s Carbon Limestone Landfill.

“Out of an abundance of caution we notified the only oil and gas operator in the area and ordered them to halt all operations until further assessment can take place,” said ODNR spokesman Mark Bruce. “ODNR is using all available resources to determine the exact circumstances surrounding this event and will take the appropriate actions necessary to protect public health and safety.”

Residents in several nearby townships reported feeling the earthquakes on Monday. Hilcorp has seven Utica Shale wells on two pads at the landfill, only one of which is producing. The wells, each drilled to a vertical depth of 7,900 feet, are in the town of Poland, which is in Mahoning County.

In all, the company has 12 permits to drill at the site. It remains unclear what operations the company was undertaking before the earthquakes.

Hilcorp, a privately-owned company, said its wells at the landfill are in various stages of development, but it has not provided any specifics. When asked about the status of those wells, Bruce first said that several were being stimulated, but he then backtracked and said it wasn’t immediately clear where the company was in its operations.

“We’re trying to nail down the status right now. The first thing we have to do is try and get some resolution to see what caused all this,” he said. “We’ve asked them for a whole slew of information. We’re trying to get a hold of their drilling logs, completion logs, stimulation logs and that kind of stuff, so we can look into this and they’ve been cooperating.”

Bruce said it was unclear when Hilcorp would be allowed to resume its operations at the site, saying the company had received the stop work order on an “until further notice” basis. State geologists, meanwhile, have in no way ruled out naturally occurring seismic activity as no link yet exists between the earthquakes and Hilcorp’s site.

According to Bruce, state experts have said the area’s geology is no different or in no way unique from the rest of eastern Ohio, where exploration and production companies have drilled far more Utica wells.

ODNR’s move to halt Hilcorp’s operations has stoked a great deal of speculation in local news media and has residents on edge, with the incident reminding many of a 4.0-magnitude earthquake that shook nearby Youngstown on New Year’s Eve 2011 (see Shale Daily, Jan. 4, 2012).

That incident was eventually linked to an injection well in the city, which ODNR shut down. The agency later provided a report demonstrating how the injection well caused the 2011 earthquake (seeShale Daily, Sept. 6, 2013).

Hilcorp said, however, that it has no injection wells at the landfill. It has conducted operations at the site without incident since late 2012. The company also holds extensive acreage just over the state line in Pennsylvania in Mercer and Lawrence counties.

“It is far too early in the process to know exactly what happened, and we are not aware of any evidence to connect our operations to these events,” the company said. “We would also like to remind the community that a number of Utica wells have been drilled in Ohio in recent years without incident. Nevertheless, we do acknowledge that public safety is of paramount importance to our company. Accordingly, Hilcorp agrees with ODNR that all activity at the site will be suspended immediately until we determine it is safe to continue operations.”