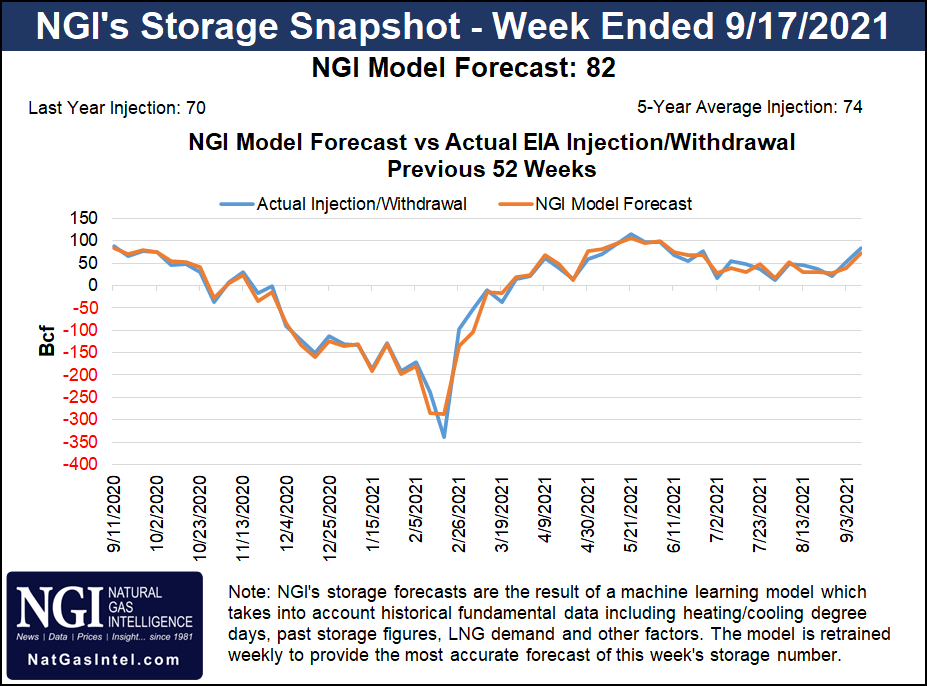 Freeport LNG in Texas largely resolved production issues after former Hurricane Nicholas knocked out power last week. This helped to drive up LNG feed gas levels to 10 Bcf on Wednesday from around 9 Bcf earlier in the week and not far from record levels reached over the summer amid robust demand from Europe and Asia.

Supplies of gas in Europe are precariously light, galvanizing calls for Lower 48 exports to rebuild stockpiles for winter. Demand from Asia is robust and its natural gas needs appear likely to swell further following a Chinese government announcement this week that it would stop building coal-fired plants abroad.

The announcement did not specify whether the policy shift would impact China’s domestic coal projects, but analysts said it would drive up gas demand in other Asian countries.

“The news should help coal be replaced by gas and renewable sources at a faster pace in developing countries, as governments will now have to scrap some of their power supply plans that depended on new coal capacity,” said Rystad Energy analyst Xi Nan. “China’s coal move can be considered another manifestation of how energy transition is changing the global power landscape.”

Bespoke Weather Services, however, said Wednesday forecasts were “essentially unchanged,” leaving the outlook bearish but no more so than the start of the week, alleviating some of the pressure.

The firm said the 15-day outlook called for below-normal gas-weighted degree days – relative to the five-year average – and forecasts for October as a whole showed mild temperatures across much of the country. This keeps “risk skewed toward low demand,” Bespoke said.

That noted, the firm added “it is too early to rely on weather as a key driver in price action yet, as it typically gains importance once we are a week or so into October.” This leaves Thursday’s U.S. Energy Information Administration (EIA) storage report “as the next major data point” that could drive futures in either direction the rest of this week.

EIA last week reported an injection of 83 Bcf for the period ended Sept. 10. That lifted inventories to 3,006 Bcf and put the market on track for nearly 3.5 Tcf in storage for winter.

Stocks totaled 3,601 Bcf a year earlier, however, and the five-year average was 3,237 Bcf. At the end of injection season last year, supplies stood at 3.9 Tcf.

For Thursday’s EIA report, which covers the week ended Sept. 17, analyst expectations pointed to a build in the mid-70s to low 80s Bcf. A year earlier, EIA recorded a 70 Bcf injection for the similar week, while the five-year average injection is 74 Bcf.

Results of a Reuters survey ranged from injections of 58 Bcf to 82 Bcf, with a median build of 76 Bcf. Bespoke predicted a 75 Bcf increase. NGI’s model called for an 82 Bcf injection.

Heat permeated major western markets on Wednesday from California to Texas as high pressure fostered highs in the 90s. However, this was expected to ease moving into next week, according to National Weather Services (NWS) data.

National demand overall has declined this week and was expected to remain modest into next week as highs of upper 60s to low 80s were forecast to permeate the Lower 48. Moderating temperatures were expected to curb demand by next week in parts of the West as well, NWS forecasts showed.

Maxar’s Weather Desk meteorologist Bradley Harvey said a trough over the eastern Pacific was expected to deepen next week. “The forecast trends cooler in the West as a result, including below-normal coverage along the West Coast.” Warm but comfortable conditions were expected in the Midwest and East next week, he said.

Physical prices were mixed in the Midwest, Texas and East on Wednesday. The Appalachia region, where hubs posted solid gains, proved an exception. Millennium East Pool climbed 28.5 cents to $4.080 and Tenn Zone 4 200L gained 11.5 cents to $4.415.

On the pipeline front, Texas Gas Transmission on Wednesday launched a three-day maintenance project at its Harrison Compressor Station in Hamilton, OH.

Wood Mackenzie said the work would limit operational capacity to 509 MMcf/d, leading to a cut of 168 MMcf/d versus Tuesday’s scheduled quantity of 677 MMcf/d. In the last 30 days, the firm said, the Harrison station averaged 667 MMcf/d and maxed at 750 MMcf/d.