Natural gas futures sailed higher on Monday, rallying for a third straight session ahead of prompt month expiration and amid a potential global energy supply crunch. 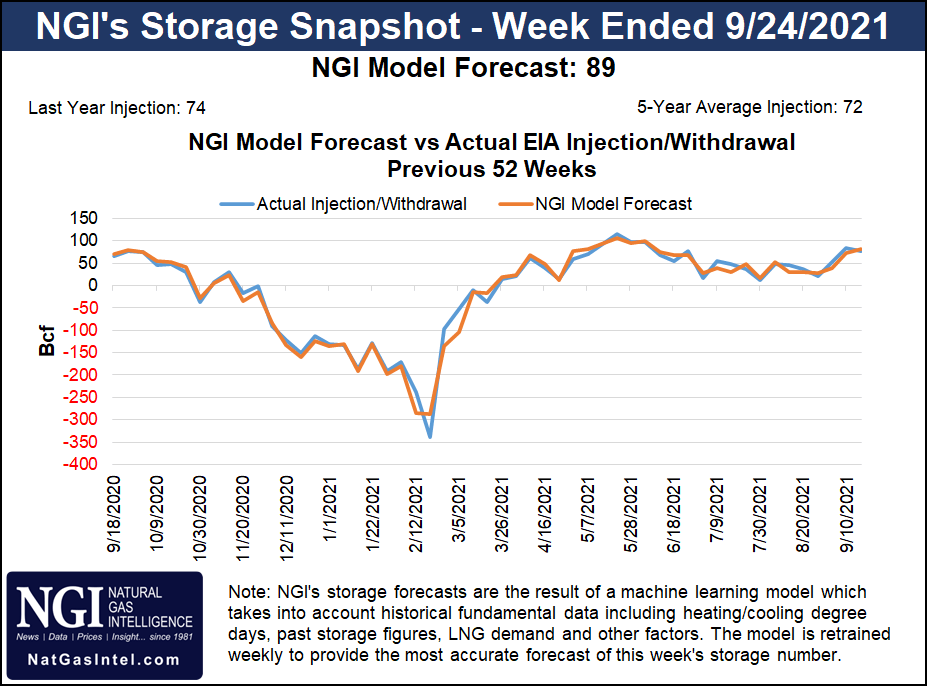 The October Nymex contract spiked 56.6 cents day/day and settled at $5.706/MMBtu. October rolls off the board as the prompt month at the close of trading Tuesday. November jumped 53.1 cents on Monday to $5.731.

However, on Monday specifically, Bespoke said contract expiration “is likely the main item to note…Regardless of any actual data, we have tended to see abundant buying into contract expirations. As such, it is difficult to tell how high we could run here, but we do see risks of a sizable pullback once the smoke of expiration has cleared.”

That noted, the firm said the Lower 48 is beginning to put summer heat in the rearview mirror. As autumn weather settles in with mild high temperatures, domestic cooling needs are expected to taper through this week and into October, minimizing demand. Bespoke said this should result in increased storage injections in coming weeks, helping to fortify U.S. stockpiles and alleviate at least domestic supply worries. Mild weather and rising storage levels could prove headwinds for futures prices in coming days, Bespoke said.

The end-of-season storage trajectory has been “shifting higher” to potentially above 3.6 Tcf – from under 3.5 Tcf a month ago — and forecasts continue to show “awful” weather-driven demand levels for natural gas, according to the firm.

“This will begin to increasingly matter over the next few weeks, to be sure,” Bespoke said.

The EBW team projected below-normal U.S. demand would put the gas market on course to come in 2.9 Bcf/d looser than the five-year average over the next three storage weeks, stretching into mid-October.

“If October weather does not turn more supportive, downward pressure on Nymex gas is likely later this week,” the EBW analysts said.

The estimates compare with a build of 74 Bcf for the same week in 2020 and the five-year average of 72 Bcf.

For the week ended Sept. 17, EIA said utilities injected 76 Bcf natural gas into storage. That increased inventories to 3,082 Bcf, though stocks were below the five-year average of 3,311 Bcf.

While the storage trajectory in the United States appears poised to help balance supply and demand ahead of winter, Europe continues to struggle on this front. ClearView Energy Partners LLC said European gas storage levels are around 73% of capacity — 13 percentage points below the 2015-2019 average at the onset of fall.

The lean supplies in Europe continue to help drive robust demand for U.S. exports of liquefied natural gas (LNG). LNG feed gas levels hovered above 10.6 Bcf on Monday, according to NGI’s estimate, within striking distance of record levels and another likely source of support for futures.

The challenges in Europe have also resulted in fuel switching from gas to oil in the power sector and, where possible, to crude for industrial applications. Rystad Energy analysts said this is helping to propel global oil prices and lifting energy commodities broadly.

Brent crude, the international benchmark, approached $80/bbl in intraday trading Monday – up more than 50% on the year. Supply disruptions in the wake of Hurricane Ida in late August combined with a global rebound in demand for travel fuels derived from oil are also boosting crude prices. Travel has recovered alongside coronavirus vaccine rollouts.

Goldman Sachs Group Inc. analysts on Monday predicted that Brent prices will rise to $90 by the end of 2021. That is up from a prior forecast of $80.

“On the demand side, low hospitalization rates confirm that vaccines are effective and are leading more countries to re-open, including to international travel,” the Goldman analysts said. “Winter demand risks are further now squarely skewed to the upside as the global gas shortage will increase oil fired power generation.”

Next-day cash prices climbed alongside the futures rally, with hubs throughout the Lower 48 posting strong gains.

Moving forward, momentum could prove difficult to sustain, given the weather outlook.

NatGasWeather said the week ahead could be “messy” as “numerous weather systems” spread across the United States. “One system over the Southwest will track into Texas midweek, while a second cooler system arrives in the Northwest. A third system will impact the Northeast early in the week, followed by a reinforcing cool shot late in the week.”

Temperatures are largely expected to be mild, NatGasWeather said, with highs in the 60s to 80s over most of the country. The Plains and Texas experienced highs in the 90s Monday and were expected to do so again on Tuesday before cooling into the 80s at midweek.

“There will be a mix of light heating and cooling demand this week,” the firm said.

Looking to next week, NatGasWeather said high pressure would “rule most of the U.S. with above normal temperatures, which for early fall means perfect highs of 70s to 80s across the northern U.S. besides the slightly cooler Northwest and Northeast corners.” The southern half of the country is projected to be warm with highs in the 70s and 80s, and reach the 90s in the Southwest and parts of Texas, the firm said.

Meanwhile, on the storm front, Hurricane Sam on Monday was roaming over open water in the Atlantic as a Category 4 storm, packing maximum sustained winds of 125 mph and moving northwest at 8 mph, according to the National Hurricane Center (NHC). Sam was about 740 miles east-southeast from the northern Leeward Islands at midday Monday. It was not yet clear Monday if Sam would reach the Lower 48 this week, but the possibility remained in play, the NHC said.

Sam “could still make landfall on the U.S. East Coast in the middle of this week,” Rystad Energy analyst Louise Dickson said. While it “will not likely cause colossal damage at upstream and downstream facilities, a powerful storm on the East Coast could trigger power shortages and blackouts at a time when natural gas prices are already stretched to maximums and add to the energy crisis fears that lifted up not only oil and gas futures, but propane, gasoil and fuel oil.”