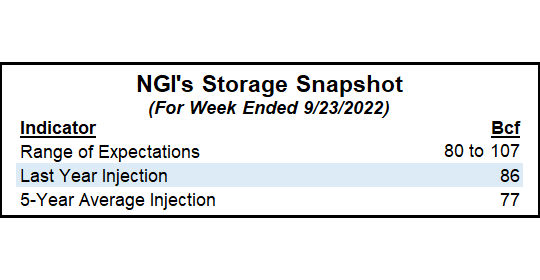 The October Nymex gas futures contract lost ground in the morning but recovered late and settled at $6.868/MMBtu on Wednesday, up 21.7 cents on its final day as the prompt month. It had lost 25.2 cents a day earlier.

Ian was carrying maximum sustained winds of 155 mph at midday. NHC predicted rainfall totals of 12-18 inches in some parts of Florida. The forecaster said two feet of rain was possible in the heart of the storm. Ian was moving at only a few mph.

The hurricane also spawned tornadoes at sea and threatened to do so as it crossed over Florida, into the Atlantic and up the Southeast coast in coming days.

“The slow-moving storm…is the kind of hurricane that destroys communities,” said meteorologist Eric Berger of Space City Weather. “There are three main threats from hurricanes — wind, surge, and inland rainfall — and unfortunately, Ian is going to bring awful doses of all three in the next few days.”

The path of the storm looked to bypass the vast majority of major Gulf of Mexico production facilities. Still, markets mulled the possibility of precautionary shut-ins trimming output near term against expected demand drops in Ian’s wake, NatGasWeather said Wednesday.

“Ian will bring comfortable temperatures to the Southeast for several days, as well as power outages for the loss of demand,” the firm said.

Demand had already dropped through much of September because of mild fall temperatures and projections for more of the same deep into October. At the same time, production climbed and reached a record of 101 Bcf/d over the past weekend, according to Bloomberg estimates.

Output was trimmed some because of Ian-related safety measures, though it remained elevated Wednesday near 100 Bcf/d.

Following the storm’s arrival, markets will turn next to the U.S. Energy Information Administration’s (EIA) storage report covering the week ended Sept. 23. The agency is slated to issue the latest data at 10:30 ET on Thursday.

Results of Bloomberg’s survey showed a median injection projection of 93 Bcf, with estimates ranging from 85 Bcf to 107 Bcf. Reuters’ poll produced injection estimates that spanned 80 Bcf to 105 Bcf. It landed at a median of 95 Bcf.

EIA posted an injection of 103 Bcf into natural gas storage for the week ended Sept. 16. The triple-digit build marked the largest of the year and it eclipsed historical averages.

Still, while the build for the Sept. 16 week lifted inventories to 2,874 Bcf, EIA said stocks remained well below the five-year average of 3,206 Bcf, justifying the recent production increases.

Global demand, meanwhile, remains robust amid European supply uncertainties linked to Russia’s invasion of Ukraine. Countries across the continent have stocked up on LNG – largely from the United States – to fortify storage ahead of winter. But several European countries may need at least some Russian gas to weather a harsh winter – and such fuel could prove elusive.

Russia this week reported damage to three lines on its Nord Stream natural gas pipeline system that connects to Europe, creating further doubts about already reduced flows of gas to the continent because of geopolitical standoffs. U.S. officials said sabotage was the likely culprit.

Russian state-run Gazprom PJSC this week also warned it may halt all supplies to Western Europe via Ukraine. This propelled European prices higher and signaled that demand for U.S. shipments of liquefied natural gas is all but sure to remain near record levels through the coming winter, maintaining an important undercurrent for U.S. natural gas bulls.

All of that followed Russian President Vladimir Putin’s threats last week of a nuclear weapon attack on Ukraine.

“Just when you thought the prospects for this winter in Europe could not get dimmer comes news that the Nord Stream pipeline system may never again deliver a molecule of Russian gas into Europe,” analysts at The Schork Report said Wednesday.

Hubs in the Southeast contributed notably to the overall decline in spot prices Wednesday.

Prices also gave up ground in the West after outsized gains earlier in the week and in the nation’s midsection, where benign weather tampered demand.

NatGasWeather said forecasts for the rest of this week and early next called for comfortable highs of 70s and 80s over much of the Lower 48, with a few exceptions in Texas and the Southwest. Highs in the 60s were likely for the Midwest and Northeast “as early fall weather systems sweep through with showers.”

Looking to the second full week of October, the forecaster expects the southern half of the United States to enjoy normal temperatures with warm highs of upper 70s to lower 90s. The northern half of the country will be warmer than normal with highs of 60s to 80s due to unseasonably strong upper high pressure. In both cases, however, both heating and cooling demand are expected to prove modest.

Meanwhile, Ian was expected to gradually weaken to a tropical storm while moving over Florida Thursday. By early Friday, it was projected to approach the Atlantic and then head north toward the Southeast coast, according to Wood Mackenzie analyst Kara Ozgen. Georgia and South Carolina had already declared tropical storm warnings.