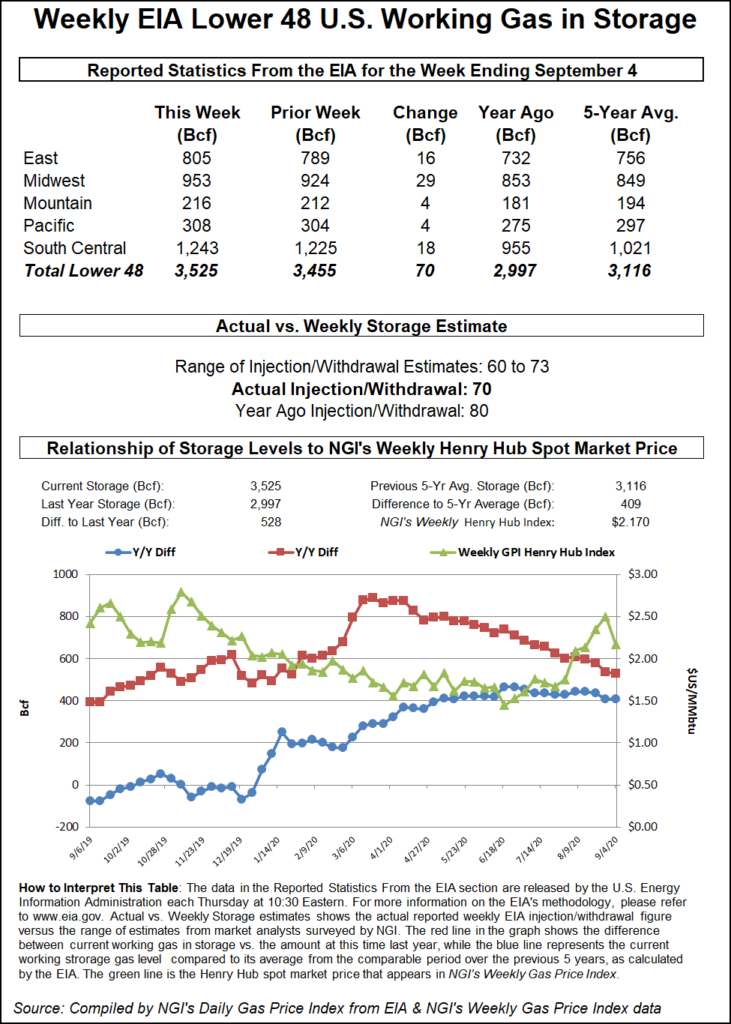 The latest result compared with an 80 Bcf build a year earlier and a five-year average of 68 Bcf. EIA reported a 35 Bcf injection into storage for the week ended Aug. 28.

Analysts said the increased injection, relative to the prior week, reflected cooler weather conditions across much of the nation’s midsection and lingering power outages from the destruction of Hurricane Laura in late August. Fall weather could drive builds higher in coming weeks.

“Storage is still filling fast, so we are not convinced of a bullish case at the front of the curve right here,” Bespoke Weather Services said.

By region, the Midwest topped all others with a build of 29 Bcf. The South Central followed with an injection of 18 Bcf that included a 13 Bcf injection into nonsalt facilities and a 4 Bcf add to salts. The EIA total does not always equal the sum of components because of independent rounding.

East inventories grew by 16 Bcf, while Mountain and Pacific region stocks each increased by 4 Bcf.

Participants on The Desk’s online energy platform Enelyst forecast increased storage builds over the next three covered weeks. Early expectations call for an injection above 80 Bcf with the report covering the short Labor Day week. Chilly temperatures have permeated the Rocky Mountain region this week, and there is an expectation for a triple-digit build in the final full week of September.

The future builds this month “will be stout,” said one participant on the Enelyst platform. Another noted that, while liquefied natural gas demand this week is “surging higher” as feed gas flows at Cheniere’s Sabine Pass mount after the export terminal reopened following a Laura-imposed shutdown, gains could be “offset by losses in power burn demand as cooler, more fall-like temperatures move in.”