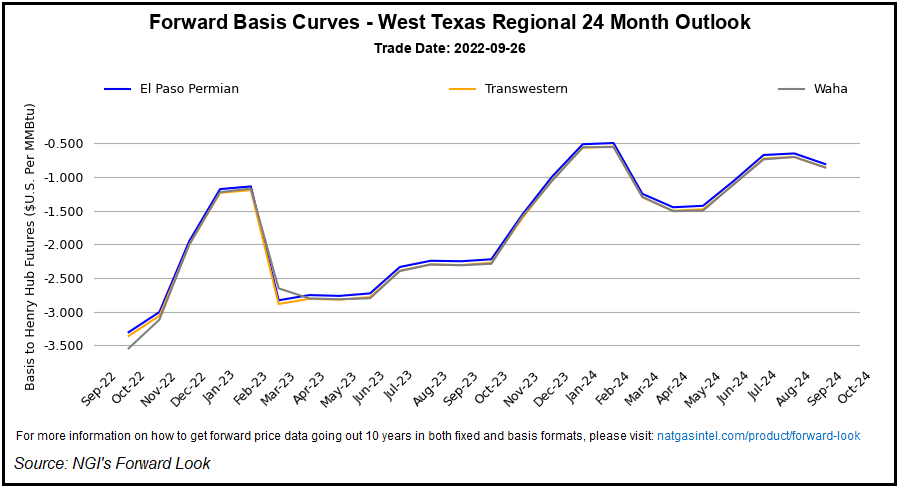 After making landfall over western Cuba, Hurricane Ian veered toward the southeastern Gulf of Mexico (GOM) Tuesday, carrying maximum sustained winds of 125 mph, according to the National Hurricane Center (NHC). The storm was expected to approach the west coast of Florida by late Wednesday, the NHC said.

Ian was measured as a Category 3 hurricane at midday Tuesday, but NHC forecasters said it could strengthen and reach Florida as a “dangerous major hurricane.”

Producers, including BP plc and Chevron Corp., evacuated personnel and shut in some facilities in precautionary moves. Forecasters said Ian’s projected path would steer it clear of most major production operations in the GOM, but they also noted the unpredictability of major hurricanes, and market participants braced for impacts to output.

At the same time, the storm’s fierce winds were expected to cause power outages and drop temperatures, possibly curbing natural gas consumption in the Southeast. This would develop at a time when National Weather Service (NWS) forecasts call for mostly mild temperatures across the northern United States this week and into October, Rystad Energy analyst Ade Allen noted.

Allen also noted that mounting recession expectations in the United States and globally in the wake of multiple central bank interest rate hikes are weighing on commodity markets, including natural gas futures.

“U.S. natural gas prices are falling this week as weakening global economic sentiment and the very real threat of a recession and demand slowdown start to impact the U.S. market,” Allen said.

“The destruction that happened within one day at three lines of the Nord Stream pipeline system is unprecedented,” a Nord Stream AG spokesperson said. “It’s impossible now to estimate the timeframe for restoring operations of the gas shipment infrastructure.”

The bulk of gas delivered via the Nord Stream network, which extends from Russia to Europe, was already cut off by the Kremlin in retaliation against the European Union (EU). The EU has levied several rounds of sanctions against Russia because of the Kremlin’s invasion of Ukraine.

Still, with both production and demand uncertain – and October contract expiry looming – U.S. futures traded in a narrow range of gains and losses through the first half of the day and ultimately headed lower as traders digested the likelihood of demand losses and expectations for increased gas in storage.

While production was off modestly ahead of the hurricane’s arrival in the United States, it was still relatively strong. Bloomberg estimated output at 99.5 Bcf/d Tuesday, down modestly from the 101 Bcf/d record reached over the weekend.

As output advances, analysts are looking for another stout storage build with this week’s Energy Information Administration (EIA) inventory report.

Preliminary results of Bloomberg’s survey for the week ended Sept. 23 found injection estimates ranging from 86 Bcf to 99 Bcf, with a median of 92 Bcf.

Most recently, EIA posted an increase of 103 Bcf in storage for the week ended Sept. 16. It marked the largest of the injection season.

Still, while the build for the Sept. 16 week lifted inventories to 2,874 Bcf, EIA said stocks remained well below the five-year average of 3,206 Bcf. Expected robust production would address the gap, but storage concerns could remerge quickly if output is derailed, Allen said.

That noted, market participants are “recalibrating their expectations for September balances and we could see more triple-digit injections in the coming weeks,” Allen added.

Against the backdrop of solid production, increased supplies and waning demand, spot gas prices gave up ground most of the past week, as they have through much of September. Still, physical markets rallied on Tuesday, bolstered by gains in Texas and the Southeast – areas that could be impacted if Ian’s damage to production facilities proves greater than projected.

NWS forecasts called for continued high temperatures in the 90s across the Southwest and Southern California through this week. However, in addition to the anticipated impacts of Ian in the Southeast, the outlook called for mostly benign conditions in the Mountain West, Midwest and Northeast – with highs mostly in the 60s to low 80s. More of the same was forecast for next week.

As such, as Rystad’s Allen noted, early impacts to production in preparation for Ian likely provided the bulk of price support.

As of midday Tuesday, GOM operators had shut in 184 MMcf/d of natural gas, or 8.56% of total offshore output. A total of 190,358 b/d of oil, or 11% of the offshore crude supply, also was shuttered, according to the Bureau of Safety and Environmental Enforcement (BSEE).

Based on data from offshore operator reports submitted as of 11:30 a.m. CT, personnel had been evacuated from 12 production platforms, which represented 2.3% of the 521 manned platforms, said BSEE’s Hurricane Response Team.

Personnel also had been evacuated from two rigs that were non-dynamically positioned (DP), equivalent to 15.38% of the 13 in operation. A total of four DP rigs, or 21% of the 19 working, also had been moved out of the storm’s path as a precaution.

Chevron transported “all personnel from our Petronius and Blind Faith platforms” and had shut in the facilities. Production at other Chevron-operated offshore assets remained “at normal levels,” a spokesperson said.

Carolyn Davis contributed to this report.