Natural gas futures waffled between gains and losses on Wednesday as Hurricane Laura’s destruction and still anemic U.S. liquefied natural gas (LNG) exports continued to weigh on markets. After falling more than 8 cents early, the prompt month climbed back into positive territory before midday following estimates for a modest storage build that could ease concerns about fall containment challenges. Futures, however, failed to finish in the green. 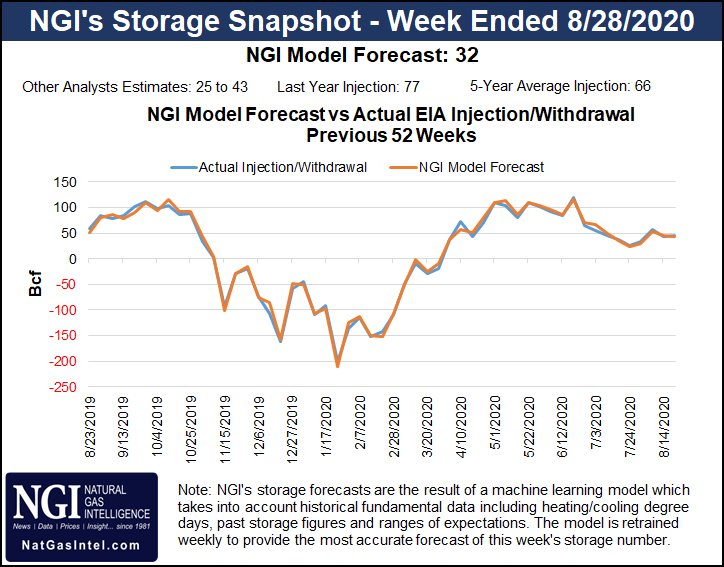 Ahead of the U.S. Energy Information Administration (EIA) storage report on Thursday, analysts predicted relatively modest additions to underground gas stockpiles for the week ended Aug. 29. A Bloomberg survey found injection estimates ranging from 29 Bcf to 43 Bcf, with a median of 37 Bcf, while a Reuters poll found estimates ranging from 25 Bcf to 43 Bcf and a median of 35 Bcf.

NGI estimated an injection of 32 Bcf, on par with the Bespoke Weather Services prediction.

Should projections in the 30s Bcf bear out, the headline figure would mark an improvement from the 45 Bcf net increase posted for the previous week, a result that was lower than the week before and pointed to supply/demand tightening, analysts said.

Working gas in storage was 3,420 Bcf as of Aug. 21, according to EIA. Stocks were 580 Bcf higher than a year earlier and 438 Bcf above the five-year average.

Genscape Inc. is watching stockpiles in the Midwest and East closely. It estimated that, as of late August, Midwest storage was sitting at 904 Bcf, 13% above year-ago levels. East storage hovered near 775 Bcf, 12% higher, raising concerns about storage capacity in the fall.

Meanwhile, cooling weather that could curb air conditioning use and ongoing concerns about recovery from Laura, which made landfall Aug. 27, continued to keep Nymex futures in check.

NatGasWeather projected continued modest temperatures across much of the nation’s midsection, with highs of 60s to low 80s. Highs could dip into the 50s in parts of the central United States next week, limiting cooling demand.

Natural gas demand along the Gulf Coast may take weeks to rebound to levels seen prior to Laura, Genscape analyst Dan Spangler said, with the pace of recovery varied by region.

“Notable examples,” he said, included the massive Motiva Enterprises LLC refinery in Port Arthur, TX, which can process around 607,000 b/d. The facility “is scheduled to consume roughly 50% of the natural gas it normally does,” Spangler said. “The facility spent only one day shut down when Laura made landfall last Thursday.”

The Natgasoline methanol plant in nearby Beaumont, TX, “spent three days offline based on scheduled natural gas deliveries but has since returned to 70% of normal levels,” he noted. The Motiva and Natgasoline facilities “consume well over 100 MMcf/d…”

In Louisiana’s Cameron Parish, however, the Sabine Pass and Cameron liquefied natural gas (LNG)  export facilities had yet to resume significant operations as of trading Wednesday.

“Cameron LNG hasn’t reported taking any feed gas since Aug. 26,” Spangler said. “Sabine has similarly been at zero since Aug. 25. However, Creole Trail Pipeline is reporting a tiny 8 MMcf/d delivery to the facility as of the evening cycle of Wednesday’s gas day.”

EBW Analytics Group had a similar read. “The main issue at this point is the time frame for restoring power at Sabine Pass and Cameron,” analysts said Wednesday.

“There are indications that power is already flowing at Sabine Pass. Refineries and industrial plants located near Cameron, however, have stated that restoration of power to their facilities could take up to three weeks, raising questions regarding the restart of Cameron. Until this uncertainty is resolved, the October natural gas contract is likely to remain under pressure.”

BSEE estimated that 19.65% of natural gas production still was shut-in, while 19.90% of oil remained offline as a result of Laura’s impact.

On the LNG front, feed gas levels ticked up to about 3.15 Bcf on Wednesday, after hovering slightly below 3.0 Bcf a day earlier. Still, much improvement is needed in the weeks ahead to drive stronger export activity that would help align supply and demand ahead of winter.

That noted, analysts told NGI this week that, following the demand destruction imposed by the coronavirus pandemic, U.S. LNG exports would likely reach capacity of roughly 10 Bcf/d by the winter after dropping to about 30% of capacity in July.

Spot prices advanced Wednesday amid the supply disruptions following Laura and as heat held up over swaths of the country early in September.

Aside from the chillier weather in the Midwest, NatGasWeather said “hot high pressure rules the West” in the near term “with highs of upper 80s to 100s,” and the soaring temperatures are likely to persist next week, with the hottest conditions in California and the Southwest. The East will warm into the mid-80s to low 90s as high pressure builds in for a modest bump in national demand” this week, the forecaster said.

Against that backdrop, next-day prices jumped across the West and Northeast as well as in Texas.

On the related pipeline front, Transcontinental Gas Pipe Line declared a force majeure late Tuesday, citing multiple unplanned outages on its mainline near Station 45 in Beauregard Parish, LA, and its SW Louisiana Lateral. “These are lingering effects of Hurricane Laura,” Genscape said. Various transportation services may be limited in the vicinity of the at-risk facilities, the firm said.