Natural gas futures on Tuesday declined for a fourth straight session, as traders mulled cooling weather patterns and interruptions to U.S. exports of liquefied natural gas (LNG). Global demand, however, remains robust and stockpiles for winter are tight, leaving open the potential for a supply crunch and a surge in prices in the weeks ahead. 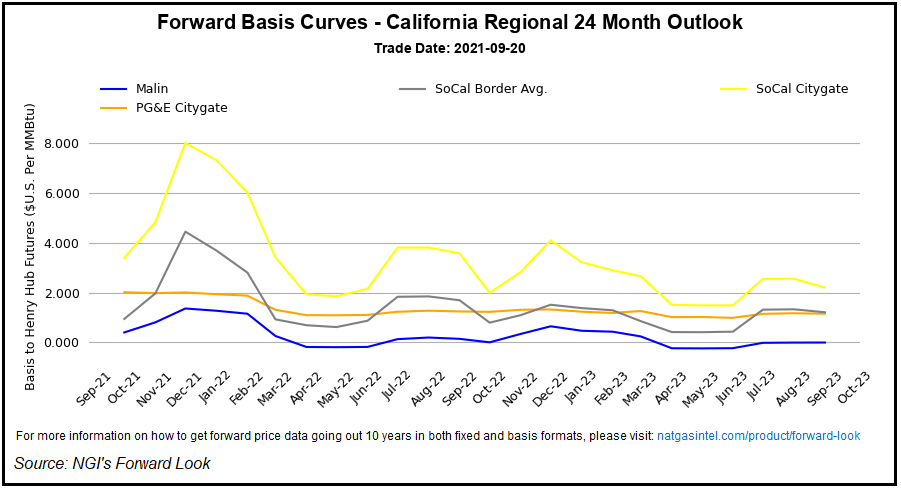 Tuesday’s futures action marked the second day in a row and the second time in the last seven sessions that the prompt month closed below $5.00. This signaled that the market needed to rebalance lower “in the aftermath of a fierce, but overextended, four-week rally” that started in August and extended deep into the current month, EBW Analytics group said.

After predicting cooler temperatures for the week ahead, NatGasWeather said Tuesday both the American and European weather models also shed degree days for next week. The forecasts showed “bearish weather patterns the next 15 days” that further curbed enthusiasm in futures markets.

“Most of the U.S. experiences perfect highs of upper 60s to mid-80s and with coverage of 90s decreasing considerably and confined to areas of California, the Southwest and southern Texas,” the firm said. “How long this comfortable U.S. pattern lasts is of great interest since it will result in much larger builds into supplies until more impressive cold arrives, which we don’t see opportunity for until near or after Oct. 7 at the earliest.”

NatGasWeather also noted that the last two U.S. Energy Information Administration (EIA) storage prints were higher than markets expected and production had recovered to above 91 Bcf/d this week. Output had dipped to around 90 Bcf/d or lower during the first half of September, after Hurricane Ida wreaked havoc in the Gulf of Mexico (GOM) when it crashed ashore in Louisiana on Aug. 29.

Additionally, Freeport LNG in Texas continued to grapple with production issues after former Hurricane Nicholas knocked out power last week. The Cove Point LNG terminal in Maryland also paused operations Monday for a 20-day stretch of maintenance. LNG feed gas volumes were down to around 9.6 Bcf on Tuesday, well below the 11 Bcf level at which they hovered much of the summer.

That noted, demand for U.S. LNG is robust and volumes are expected to resume in force following the maintenance work. This is because of light supplies of gas globally and precariously tight conditions in Europe following a particularly long heating season on the continent last winter and lower-than-usual availability of wind energy this summer.

Natural gas demand has also been robust in Asia, driven largely by China’s economic recovery from the pandemic. Global gas prices have soared this year.

“Another harsh winter could keep prices elevated well into 2022,” the Barclays analysts said.

The International Energy Agency (IEA) on Tuesday in a statement about gas prices warned about potentially dire supply and pricing conditions if the coming winter proved harsh in Europe.

“European prices also reflect broader global gas market dynamics. There were strong cold spells in East Asia and North America in the first quarter of 2021. They were followed by heatwaves in Asia and drought in various regions, including Brazil,” IEA said.

“All of these developments added to the upward trend in gas demand,” the global energy watchdog added. On the supply side, LNG production worldwide “has been lower than expected due to a series of unplanned outages and delays across the globe and delayed maintenance from 2020.”

Elevated demand for U.S. exports comes when domestic supplies are running below average for this time of year, too. That has at times inflamed concerns about the possibility of insufficient storage levels for the Lower 48 should winter start early.

While storage injections were solid the past two weeks, build-up of underground stocks was modest through most of the summer.

For the week ended Sept. 10, EIA reported an injection of 83 Bcf into natural gas storage, eclipsing estimates and increasing inventories to 3,006 Bcf. The build, however, left supplies below the year-earlier level of 3,601 Bcf and the five-year average of 3,237 Bcf.

For this Thursday’s report, covering last week, NGI’s model predicted an 82 Bcf injection. Last year, EIA recorded a build of 70 Bcf for the similar week, and the five-year average is 74 Bcf.

Energy Aspects forecast a build roughly in line with historic norms. It estimated a 73 Bcf injection and cited a nearly 3 Bcf/d week/week increase in power burn for the period that offset a 0.8 Bcf/d gain in supply on recovering GOM production.

“Henry Hub prices appear to have been seeking to curb power sector demand and thus ensure storage adequacy throughout the injection season,” Energy Aspects said. “…However, our end-October carryout level continues to be chipped away and is now near 3.48 Tcf.”

That would fall far below last year’s end-of-season level of 3.9 Tcf.

“This indicates that gas’s share in power is still sticky, likely reflecting that some coal units need even higher prices to incentivize dispatch, especially as they protect dwindling coal stocks into winter,” Energy Aspects said.

Physical prices dropped lower as well Tuesday, led by declines in the recently volatile West, though hubs across the Lower 48 posted losses.

High temperatures remained lofty across the Southwest and the deserts of California, but forecasts called for easing in the days ahead.

National demand was expected to fade in coming days as well, weighing down prices broadly.

DTN’s weather outlook showed cooler weather enveloping much of the country later this week, including the South Central and Southeast – regions that are key to late-season cooling demand. This could leave highs in the 60s and 70s over large swaths of the country, minimizing both heating and cooling demand. The trend is expected to extend into next week, dropping cooling degree days by more than 20, according to the forecast.

“Sinking weather-driven demand and seasonal maintenance at LNG facilities could help relax physical market support for natural gas and allow Henry Hub spot prices to decline — increasing the odds that Nymex futures will trend lower” over the next seven to 10 days, the EBW team said.