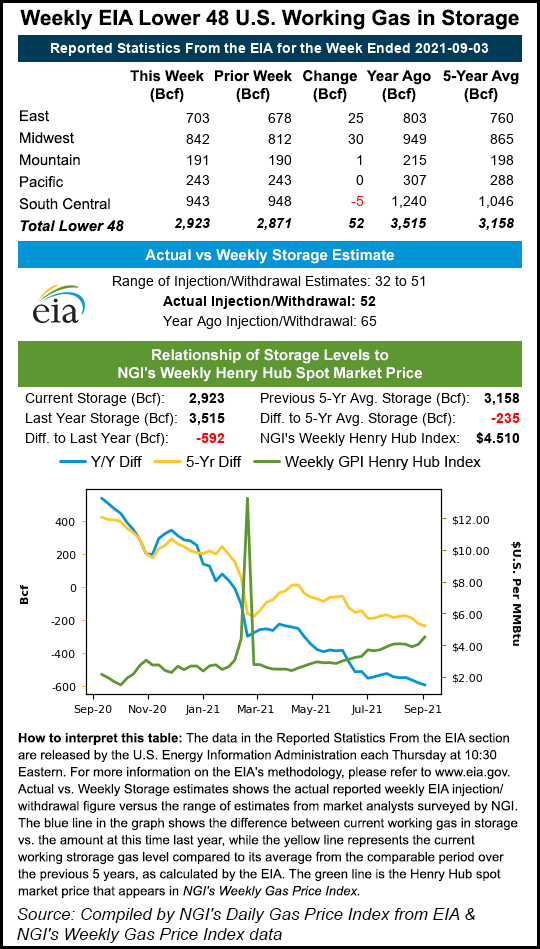 NGI’s Spot Gas National Avg., meanwhile, shed 49.0 cents to $4.915 as prices eased after spiking nearly $1.000 over the two previous days amid record heat in the West and light supplies.

National production, which had averaged around 93 Bcf/d at high points in the summer, hovered below 90 Bcf as trading commenced on Thursday. As it had the 10 previous days, Ida was the principal culprit.

At midday Thursday, most of the natural gas and oil produced in the GOM remained offline, the Bureau of Safety and Environmental Enforcement (BSEE) said. More than 77%, or 1.72 Bcf/d, of natural gas remained shut-in, BSEE said. There also was 76%-plus of the oil production offline, or 1.39 million b/d.

As far as getting crews back to work offshore, BSEE said personnel had not returned to 71 of the 560 manned platforms, and four moored rigs remained without crews. In addition, two dynamically positioned, or unmoored, rigs had not returned to the locations they were working before Ida.

Entergy Corp., which serves the New Orleans area and some of the hard-hit towns along Louisiana’s coast, reported around 299,000 power outages remained Thursday. The utility reiterated that the most distressed parishes in southeastern Louisiana may not have power restored until later this month.

Additionally, Bespoke Weather Services noted that, following a summer of robust domestic cooling needs and elevated demand from both Europe and Asia for U.S. exports of liquefied natural gas, output was already trailing consumption. With the peak winter heating season looming and forecasts calling for stretches of bitter cold, Bespoke said production needs to rise sharply to ward off the threat of precariously light storage. Inventories are on track to fall short of the 3.5 Tcf level that Bespoke estimates is needed to ensure adequate supplies in the event of a harsh winter.

The 2022 Old Farmer’s Almanac, released this month, predicted “bone-chilling, below-average temperatures” across most of the United States. “This coming winter could well be one of the longest and coldest that we’ve seen in years,” said the Almanac’s editor, Janice Stillman.

In the meantime, Bespoke said, cooling demand is holding strong and is expected to carry through most of September, and perhaps longer, owing to a La Niña base state.

“We project that the month as a whole will wind up near the five-year average in terms of total gas-weighted degree days, which is quite impressive, given how hot September has been over the last few years,” Bespoke said. “La Niña patterns often favor warmth into October as well. We are at peak season, historically, regarding tropical activity as well, but as of right now, we have no threats on the horizon in terms of notable impact for natural gas purposes” aside from Ida’s aftershocks in the Gulf of Mexico (GOM).

“We need as much gas in storage as we can get,” Bespoke added.

The U.S. Energy Information Administration (EIA) on Thursday said utilities injected 52 Bcf natural gas into storage for the week ended Sept. 3. The print topped analysts’ expectations – polls estimated a build around 40 Bcf — but the increase was not enough to alleviate stockpile concerns.

Criterion Research’s James Bevan noted that demand has recovered faster than production in the GOM as power was restored in recent days. “Pipeline deliveries to industrial facilities have now recovered back above 0.5 Bcf/d, and power plant deliveries are holding near 0.5 Bcf/d,” he said on The Desk’s online energy platform Enelyst.

However, “it’s tough on the Gulf Coast” in terms of assessing the timing of a full output recovery, Bevan said. “We can’t see a thing.”

Analysts said the spikes earlier in the week were not sustainable, but they anticipated that western cash prices would remain inflated well into September. “With forecasted temperatures in southern California remaining elevated, and no end in sight for the Line 200 force majeure, cash prices at SoCal Citygate will likely remain high,” along with other hubs, Schulz said.

NWS forecasts showed persistent heat in the West and South through the end of this week and further into September. Markets in the Midwest and Northeast were expected to see a mix of conditions, with highs ranging from the comfortable 60s in some areas to the upper 80s in others next week.

Meanwhile, Wood Mackenzie analyst Kara Ozgen noted that Tropical Storm Mindy had formed Wednesday after “cruising through most of the Gulf as a disturbance.” Mindy made landfall on the Florida Panhandle late Wednesday, bringing heavy rains at points. However, the storm moved back out to sea Thursday without affecting natural gas production.

Separately, Hurricane Larry moved north Thursday as it passed Bermuda. It appeared headed to Canada’s Atlantic coast by week’s end, according to the National Hurricane Center (NHC). The NHC warned that Larry could produce life-threatening rip currents along its path, potentially affecting both the U.S. and Canadian east coasts. However, it was not expected to impact gas production.