Natural gas futures faltered on Monday, extending to three days a losing streak that materialized alongside forecasts for cooler temperatures and moderating demand. 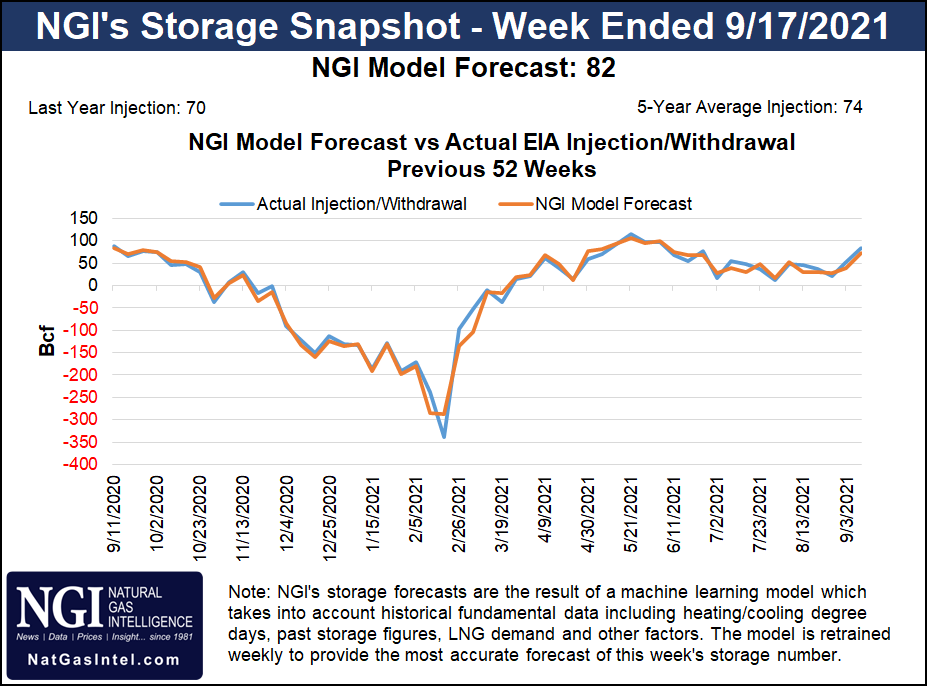 The firm sees “cooler changes in the South later this week, reducing CDD,” and a “second push of cooler air comes through the eastern U.S. this weekend.” By next week, “warmth builds in the middle of the U.S., resulting in a pattern that favors below-normal HDD as we head into the start of October.”

The below-normal heating demand for early October would occur as HDDs overtake CDDs “in terms of significance to the natural gas market,” Bespoke added.

The firm, however, added that a global supply crunch continues to put upward pressure on prices in Europe, the UK and Asia. This could also influence markets in the United States because American exports of liquefied natural gas (LNG) are in high demand to fortify overseas stockpiles ahead of winter, when gas consumption peaks to heat homes and businesses.

With lofty gas prices, Goldman Sachs Group Inc. analysts said Monday countries in Europe and other regions may have to burn oil this winter to keep plants running, while dedicating precious gas resources to power furnaces. The Goldman team said an additional 1.3 million b/d of oil could be used for power generation this winter.

The “tightness in global gas supplies creates a clear and potentially meaningful bullish catalyst for the oil market this winter,” the Goldman team led by Damien Courvalin said in a note to clients.

The analysts also noted that, with European gas stocks at “exceptionally low levels ahead of peak winter demand,” there is notable risk that gas-to-coal switching and renewable energy generation could fall short and leave supplies “insufficient” to prevent depletion of gas inventories “by the end of winter.”

Additionally, the United States is on pace for about 3.5 Tcf of gas in storage by the close of October, when injections typically end. That compares with more than 3.9 Tcf last year. Demand was strong throughout a hot summer, while production remained light relative to pre-pandemic levels. Output on Monday hovered around 91 Bcf, about 5 Bcf below highs reached early in 2020.

If the coming winter proves particularly cold, domestic supplies could run low. That specter helped power futures last week to a seven-year high above $5.400. Bespoke said another rally could soon develop if forecasts point to an early arrival of winter chills. Despite the pullback Monday, futures prices have roughly doubled for the year.

For Thursday’s Energy Information Administration storage report, NGI’s model is calling for an 82 Bcf injection into natural gas stocks for the week ended Sept. 17. Such a build would come in above historical norms. Last year, EIA recorded a 70 Bcf injection for the similar week, and the five-year average injection is 74 Bcf.

For the week ended Sept. 10, EIA reported an injection of 83 Bcf into natural gas storage. The build lifted inventories to 3,006 Bcf. However, it left stocks notably below the year-earlier level of 3,601 Bcf and the five-year average of 3,237 Bcf.

IECA calculated that, with winter natural gas above $5.000, it could cost U.S. consumers an additional $109 billion annualized. With Goldman and Morgan Stanley analysts separately warning of $10 gas at the height of winter, IECA also cautioned that double-digit winter prices could force U.S. manufacturing facilities to shut down.

“IECA’s request for slowing exports in the immediate term appears highly unlikely at the current juncture, particularly as any LNG export reductions would further increase the risk of dangerous shortages abroad,” EBW said. “If Nymex natural gas spikes toward $20/MMBtu or more in an extreme scenario and growing unrest spreads domestically in the United States, however, all options may be theoretically on the table.”

Spot gas prices, overall, traded sideways amid the near-term demand uncertainty. NatGasWeather forecasted a mixed outlook for the week ahead.

“A weather system with showers and thunderstorms will exit the Northwest and track across the Midwest/Great Lakes mid-week, then stall over the Ohio Valley and East late in the week,” the firm said Monday. Temperatures “with this system will be mild to nice with highs of 60s to 70s.”

In contrast, the nation’s “strongest demand will be from California to Texas as high pressure brings hot highs of 90s to near 100,” supporting regional cash prices. National demand “will drop to very light levels late this week and next weekend,” however, “as highs of upper 60s to 80s rule most of the U.S. and with very little coverage of 90s.”

Against that backdrop, cash prices advanced in parts of Texas and the West but declined elsewhere.

On the maintenance front, the Cove Point LNG terminal in Maryland paused operations on Monday for a 20-day stretch of work. Wood Mackenzie analyst Kara Ozgen said the annual project was expected to cut feed gas to the terminal from 734 MMcf/d to zero. The interruption coincided with the bearish weather forecasts to weigh on prices Monday.