Hotter trends held in the latest weather models, leading to another surge for natural gas futures. Already being driven by “heavily crowded short speculative trade,” the October Nymex contract surged as high as $2.31 before going on to settle Thursday at $2.296, up 7.4 cents on the day. November climbed 6.8 cents to $2.342. 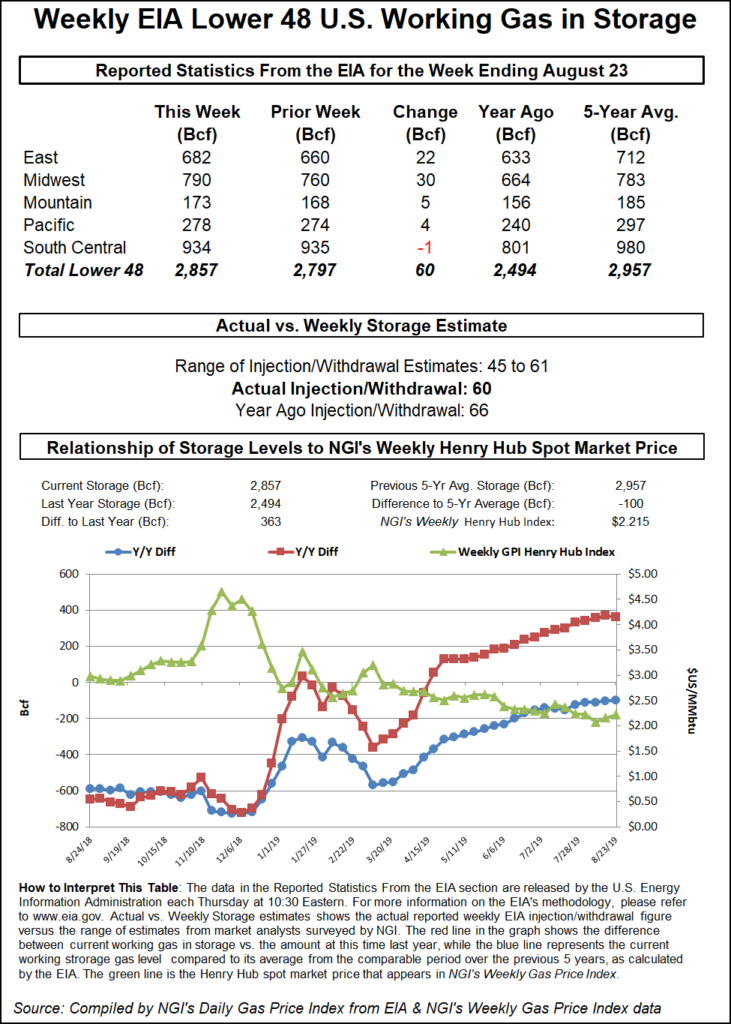 Spot gas, which traded Thursday for Friday and Saturday delivery, fell as light natural gas demand continued across the Midwest, Northeast and Mid-Atlantic regions due to weather systems bringing showers and cooling. Meanwhile, Hurricane Dorian remained a threat for Florida as it barreled across the Carribean, dumping heavy rains and slashing demand. Driven by steep losses in California, the NGI Spot Gas National Avg. fell 7 cents to $1.96.

Recent strength in the cash market helped prop up Nymex futures for much of this week, but speculative traders that had notched a record number of short positions earlier in the month remained in the driver’s seat even as cash prices retreated on Thursday.

The latest weather models also aided in the rally, as hotter changes were seen for both next week and the 11- to 15-day outlook. Midday weather data held onto the heat for next week, but then flipped back cooler for the Sept. 7-13 period, according to NatGasWeather.

The inconsistency in the weather models is one reason Bespoke Weather Services was remaining cautious in its forecast, even though it has been calling for a hotter September overall.

“As we’ve said, however, it’s getting to the time of year where it will take strong anomalies to move the needle,” Bespoke chief meteorologist Brian Lovern said. “We wouldn’t rule that out, but we are not there yet.”

Nevertheless, the September Nymex contract rolled off the board at its month-to-date high, which is a positive sign for producers and a warning sign to consumers, particularly when considering August has seen production increase to new highs, liquefied natural gas (LNG) exports suffer temporarily due to planned outages and weather realized 5% cooler than last year, according to Mobius Risk Group.

“Although the September contract broke back above round number resistance at $2.25, a level closely defended for the past month, Wednesday’s expiration was 64 cents lower than the September 2018 expiry, and still squarely in favor of coal-to-gas switching where applicable,” Houston-based Mobius said.

Meanwhile, Thursday’s storage data failed to stymy the momentum, even as the Energy Information Administration (EIA) reported a figure that was on the high end of expectations. The EIA reported a 60 Bcf injection for the week ending Aug. 23.

The reported build compared with expectations that ranged from 45 Bcf to 61 Bcf and came in below last year’s 66 Bcf injection but a few Bcf above the five-year average of 57 Bcf, according to EIA.

“This was reflective of very loose balances despite some increase in LNG for the week reported on,” Bespoke’s Lovern said.

Broken down by region, the EIA reported a 30 Bcf injection in the Midwest and a 22 Bcf build in the East. The Mountain region added 5 Bcf to stocks, while the Pacific added 4 Bcf. In the South Central region, a net 1 Bcf withdrawal was reported, which included a 6 Bcf draw from salt facilities and a 6 Bcf injection into nonsalts, according to EIA.

Traders took a few minutes to digest the storage data, with prices holding near $2.28 just after the print hit the screen but then sliding to $2.262 in the next half-hour.

Bespoke noted that prices quickly recovered, perhaps due to the market expecting cash prices to remain strong and/or that this week’s balance data, despite weaker power burns, appears a little tighter due to new highs in LNG and the current dip lower in production.

“We also took out the 50-day moving average and broke above the top of the downtrend channel that had been in place since March, which could have brought in some technical buyers,” Lovern said. “Whatever the case may be, price action, and time of year, given that seasonality shifts bullish starting next week, indicates that one must be cautious if selling right now, though we would not be surprised to see a dip lower as today’s EIA number is further digested, and if it looks more likely that we see a notable amount of demand destruction thanks to Dorian.”

Indeed, all eyes were on Dorian, which remained a category 1 storm as of Thursday afternoon, but was increasing in strength. In a Thursday afternoon update, the National Hurricane Center (NHC) said the center of the storm was moving toward the northwest near 13 mph (20 km/h), and this general motion is expected to continue through Friday. A west-northwestward motion to westward motion was forecast to begin by Friday night and continue into the weekend.

On this track, Dorian should move over the Atlantic well east of the southeastern and central Bahamas Thursday and Friday, approach the northwestern Bahamas Saturday and move near or over portions of the northwest Bahamas on Sunday, the NHC said.

Strengthening is forecast during the next few days, and Dorian is expected to become a major hurricane on Friday, and remain “an extremely dangerous hurricane” through the weekend.

For now, Dorian remains mostly a Florida threat Sunday night into Monday, according to Bespoke, with any impacts seen as bearish for the market due to cloud cover and power outages.

However, a change in Dorian’s projected path from Wednesday’s forecast now has the storm tracking northwestward. Updated forecasts still lack high degrees of confidence but indicate the possibility the storm could move across the Florida peninsula and enter the Gulf of Mexico. Florida Gov. Ron DeSantis declared a state of emergency in advance of the hurricane.

The state’s utilities on Thursday began urging customers to prepare for the storm.

Duke Energy said it expects damage to its infrastructure that may result in extended power outages.

“Hurricane Dorian is intensifying and poses a significant threat to east central Florida,” said Duke’s Florida storm director Jason Cutliffe. “We join state officials in asking everyone to take this storm seriously and prepare now. We also ask our customers for their patience. With a Category 4 hurricane, power may take several days to restore.”

Duke has a detailed storm response plan in place. In advance of the hurricane, the company will move repair crews and resources so they are staged and ready to help restore power as soon as it is safe to do so. In addition, line technicians and workers are checking equipment, supplies and inventories to ensure adequate materials are available to make repairs and restore power.

TECO Peoples Gas was also preparing to handle any gas-related emergencies and urged consumers to leave their natural gas service on, even in the event of an evacuation.

Spot gas prices were down across most of the country on Thursday with light demand seen lingering through the Labor Day holiday. The steepest declines occurred in California, where prices continue to retreat from recent highs due to slightly moderating temperatures but still remain well above where they started the week.

The extreme temperatures seen across California earlier this week prompted Southern California Gas (SoCalGas) to withdraw gas from its Aliso Canyon storage facility for the first time under the newly modified withdrawal protocol, which does not require that field to be treated as an asset of last resort.

The withdrawal began during the first hour of Wednesday’s gas day following a season-to-date demand high of 3.164 Bcf/d of sendout on Tuesday, according to Genscape Inc. SoCalGas met about 75% of that demand with flowing supply, relying on storage withdrawals for the rest.

Demand fell back to around 2.5 Bcf/d for Wednesday’s gas day, however, these conditions allowed for Condition 1 of the new Aliso Canyon Withdrawal Protocol to be met, which is a low operational flow order (OFO) having a severity of at least stage 2.

Over in the Rockies, cash prices were down anywhere from a few pennies to as much as 15 cents at El Paso San Juan, which averaged $1.935.

Texas saw some of the only gains across the country as 90-degree temperatures continued across the state. Most areas were up no more than a nickel, with Katy edging 6.5 cents higher to $2.245.

Increases were more prominent in West Texas, where El Paso Permian cash jumped 14 cents to $1.345 as Northern Natural Gas wrapped up repairs on its pipeline.

Meanwhile, the Transwestern Pipeline force majeure that went into effect on Wednesday remained in effect Thursday.

Elsewhere across the country, Southeast cash prices were a few pennies higher at most pricing hubs ahead of Dorian’s expected arrival sometime over the Labor Day weekend. Florida Gas Zone 3, however, dropped a half-cent to $2.34.

Appalachia cash prices fell by the double-digits, with Transco-Leidy Line falling 16.5 cents to $1.57.