U.S. upstream merger and acquisition (M&A) activity rebounded in the second quarter from historic lows earlier this year, but the value was super-sized with Occidental Petroleum Corp.’s $57 billion proposed takeover of Anadarko Petroleum Corp., according to a review by DrillingInfo. 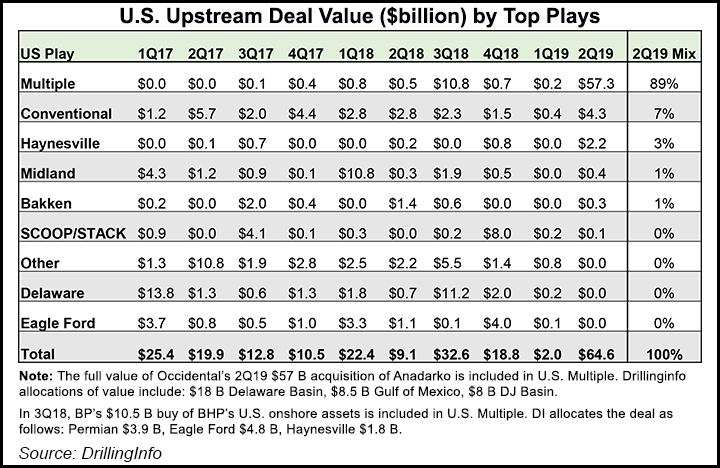 Deals rebounded to reach $65 billion between April and June, but Occidental’s one deal contributed 88% of total values during the quarter, according to data compiled by DrillingInfo’s research and database firms PLS Inc. and 1Derrick.

Although there was almost a four-fold increase from the $2 billion low in first quarter M&A, $7.6 billion was less than one-half of the average quarterly total of $19 billion seen in 2017 and 2018.

“Occidental dominated headlines this quarter with assertive maneuvering to beat out much larger rival Chevron and secure a deal with Anadarko,” said M&A analyst Andrew Dittmar. “While Anadarko’s assets span the globe, the deal is largely a play on U.S. shale — particularly in the juggernaut Permian, which continues to power U.S. production growth.”

Beyond the mega-merger the largest second quarter deals focused on the Haynesville Shale, Gulf of Mexico and onshore conventional assets.

“The support by Jones permitted Comstock to avoid one of the key impediments to acquisitions by public companies — a near complete lack of Wall Street financial support,” researchers noted. “Halfway through 2019, there has been little-to-no growth capital provided via follow-on equity raises to U.S. public operators. Following suit, bond issuances are on track for a decade low.”

Public exploration and production (E&P) companies remain focused on efficiently drilling their existing inventories, and Lower 48 production continues to grow even with a 20% average reduction cut to capital expenditures in 2019.

“Wall Street, consistent with the message for E&Ps to live within cash flow, has cut off new investment dollars from public markets,” Dittmar said. “Smaller E&Ps, many of which were focused on growth and counting on continued funding have been particularly impacted. Some of these smaller companies could evaluate whether they would be better off private.”

Private capital still is being deployed, at times using a different model than in days past.

Another big private E&P tie-up during the second quarter was the merger of Tulsa-based Chisholm Oil and Gas LLC and Houston’s Gastar Exploration LLC.

“What didn’t emerge in the second quarter was a spate of public company consolidation in the wake of Occidental/Anadarko,” analysts noted. “Commentary from market participants including management at the majors indicates the wide expectations in price between buyers and sellers makes deals challenging.”

Additional “mergers of equals” may occur going forward, similar to the E&P combination between Houston-based independent Amplify Energy Corp. and Oklahoma’s Midstates Petroleum Co. Inc. More mergers of near equals in the oilfield services sector may be on the horizon too, following the recent proposed tie-up between C&J Energy Services and Keane Group Inc.

Both the Amplify/Midstates and C&J/Keane transactions are “leading to a 50-50 ownership structure between existing shareholders in the new companies,” analysts noted.

Deal activity in the third quarter is likely to remain “slow but steady” with more private capital expected to be put to work. In addition, smaller public E&Ps with solid assets may get offers to go public, but the majors may stand on the sidelines as they look for more exposure in the onshore.