Analysts reacted with almost uniform wariness and skepticism to the announcement by Mexico’s next president, AndrÃ©s Manuel LÃ³pez Obrador, of his picks for top energy sector posts and of a 175 billion-peso ($9.43 billion) plan to “rescue” the industry. 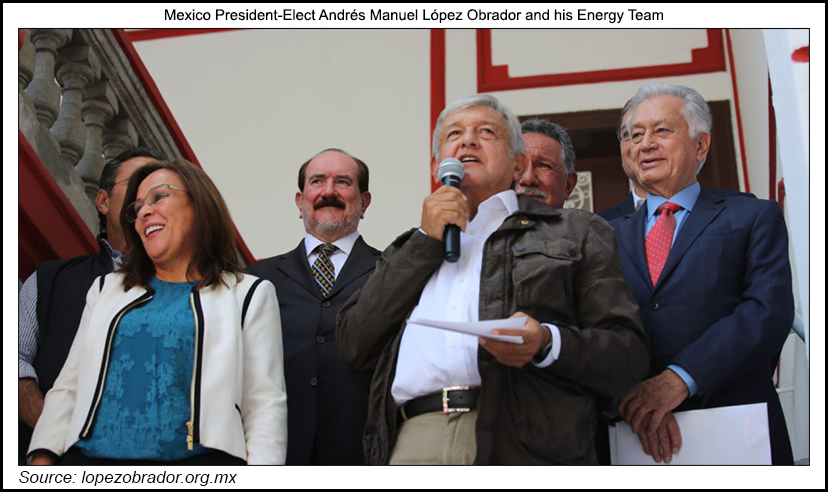 AMLO said his government would allocate 175 billion pesos ($9.43 billion) in 2019 to revitalize the sector, with funds going toward four high-priority “strategic projects.” These comprise “the extraction of oil and gas with urgency,” reconfiguration and rehabilitation of Pemex’s six oil refineries, construction of a seventh refinery in Dos Bocas in Tabasco state, and “producing more electricity,” AMLO said.

Experts such as GMEC’s Gonzalo Monroy, founder of the energy consultancy in Mexico City, were unconvinced.

Nahle, Montoya, Romero and Bartlett have all been vocal critics of the constitutional energy reform passed in 2013 by the current government, which opened up the formerly state-dominated energy industry to competition from the private sector.

In the days immediately following AMLO’s landslide July 1 victory, he had indicated that his government would respect the rule of law and work constructively with business interests, despite the decidedly nationalist tone of his campaign.

However, Monroy said, the incoming president’s proposed appointments, which should face little resistance from an AMLO-friendly congress, have sent a clear signal that liberalization efforts in the energy sector, including future upstream bid rounds, are in jeopardy.

Proponents of the reform argued that Pemex and CFE were no longer up to the task of supplying secure and affordable energy to the people of Mexico on their own, and that private capital was needed to fill the gap. Nahle and Montoya have argued the opposite, criticizing the reform as a usurpation of Mexico’s sovereignty.

In a 2014 paper, Montoya, who holds a doctorate in public policy from Stanford University, called the reform “the biggest betrayal of Mexicans in 100 years.” Nahle has somewhat toned down her criticism of the constitutional amendment since AMLO’s election, but maintains her position that she will “redirect” the reform’s implementation. Bartlett, a lawyer who has served as Mexico’s public education secretary and as secretary of the interior, has referred to the reform as a “coup” by President Enrique PeÃ±a Nieto’s government.

“Our sense is that…it will be just a matter of time” before the new administration begins “to try to make changes and move back to the system that we had in place before the energy reform was implemented.”

AMLO said his administration would designate an additional 75 billion pesos ($4.04 billion) annually for exploration and production (E&P), in order to increase crude output to 2.5 million b/d from the current 1.9 million b/d. Oil production in Mexico has been in freefall since peaking at 3.4 million b/d in 2004.

Through the refinery upgrade plan, AMLO said his government would aim to boost refinery utilization rates to 100% from the current rate of around 40%. By comparison, the rate for U.S. refiners in April was 92%, according to the U.S. Energy Information Administration.

“If media and the public have any recollection, [AMLO’s promises] will come back to haunt him,” Monroy said. “There is no way, [and] I can say that for a fact, there is no way that with such [a] limited budget he’s going to improve the utilization rate of the six refineries to 100%.”

Uncertainty surrounding AMLO’s energy agenda has not been lost on the major credit ratings agencies either.

“We are seeing three main risks,” Moody’s Mexico’s Nymia Almeida, senior credit officer, said in an interview with El Financiero TV. “The first and most important would be the expansion of the refining park of [Pemex]. Basically, the company doesn’t have the resources to make such heavy investments in refining.”

The second risk, Almeida said, would be changes to Pemex’s fuel pricing policy — AMLO has pledged not to allow gasoline prices to rise. The third would be the suspension of scheduled bidding processes for upstream acreage and for operating interests in licenses currently held by Pemex.

“I believe that that is going to be the actual red line for this administration,” Monroy said. “If Mexico is downgraded to the point of losing its investment grade, then all bets are off.”