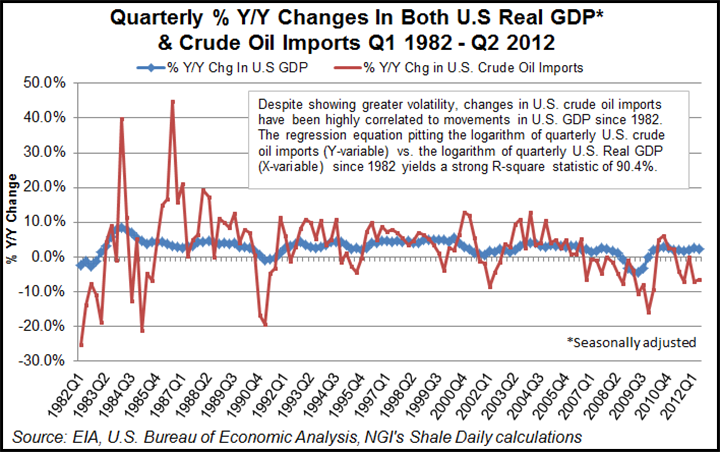 “You do understand that we may not be able to do both things at the same time?” Koppel asked. “If we allow the market to govern where that natural gas goes, and if the price overseas is several multiples of what it is back here, you’re gonna drive an awful lot of stuff overseas. That’s going to undermine the notion of becoming energy independent in this country.”

Krancer didn’t waiver. “Well, I don’t see it that way, and neither does Gov. Romney. What I see here is a burgeoning growth of demand and of uses for our energy resources right here and [subsequently] less reliance on imports.”

Police estimated that there were about 250 demonstrators Thursday chanting “stop fracking now” for a couple hours outside the convention hall before they marched through nearby city streets. The “Shale Outrage” had been billed by environmental organizations as an event highlighting homeowners’ problems with nearby fracking that had enlisted hundreds of supporters from 45 organizations in surrounding states.

“If Romney is elected president, we’ll have the first national energy policy ever,” Krancer said. “But we’re going to have to let the market take its role in doing what the market does best. I know our oil imports are down, but the main reason for that is we’re in a major recession right now.”

But “Gov. Romney’s plan is really focused almost exclusively on oil,” said Kathleen McGinty, former DEP secretary under Democratic Gov. Ed Rendell. “He’s talked about creating a North American juggernaut in oil with Canada and Mexico. It’s an interesting idea, but we’ve got to look at where we are today, which is that the United States already imports almost 100% of all the oil and gas produced today in Canada and Mexico.” (fact-checker here)

Krancer countered “We need North American partners. Canada is our friend. When was the last time the embassy in Ottawa was stormed and our ambassador killed? I think I’d rather be dealing with our friends to the north than some of the others — and I won’t call them partners — that we deal with today.”

McGinty elaborated on the president’s “all of the above” strategy that she said has led to an historic level of natural gas production, a 14-year high in domestic oil production and a 20-year low in oil imports. She advised the oil and gas industry should build relationships with various regulatory agencies, both federal and state, to get the right kind of rules in place to encourage energy development.

“The president has been very forward-looking and very encouraging and positive in terms of the shale gas and shale oil industries,” McGinty said. “He’s made it a centerpiece not only of an energy agenda or an environmental agenda, but literally the centerpiece of his economic agenda. [He is] articulating and calling for investments that would further grow this critical industry into the future.”

“It’s tough to build the type of capital-intensive infrastructure you need to support a robust and growing energy industry. So policies that enable those investments need to be made.” McGinty said.

Krancer retorted that the president’s strategy didn’t amount to much. “Some people say that this president is ‘all of the above.’ What I’m seeing is different. I’m not seeing a policy. I’m seeing a fragmented, disjointed approach that can’t even be called a policy. If it can be labeled anything, it would be ‘nothing but what’s above the ground’ or ‘wind and solar above all.’

Despite showing greater volatility, changes in U.S. crude oil imports have been highly correlated to movements in U.S. gross domestic product (GDP) since the early 1980s, according to data from the Energy Information Administration and the U.S. Bureau of Economic Analysis. A regression equation pitting the logarithm of quarterly U.S. crude oil imports versus the logarithm of quarterly U.S. real GDP since 1982 yields a strong R-square statistic of 90.4%, according to analysis by NGI‘s Shale Daily.

Since it was a shale conference in Pennsylvania, the Dimock Township v. industry v. the Environmental Protection Agency (EPA) dispute was thrown into the ring from the audience. The popularity of the Pennsylvania township as the center of debate on hydraulic fracturing (fracking) has started to wane, but the fracking dispute goes on (see Shale Daily, Aug. 23).

“There are issues here in Pennsylvania that have gotten national notoriety, for example, Dimock,” McGinty said. “That’s a tough issue. But when the EPA were called, they came in and did sample those wells. They then made a pronouncement that maybe some didn’t appreciate, but it was the facts: there was no evidence of contamination of the wells of the residences in Dimock.

“That’s the kind of work that begins to help people understand the measures that are being taken to ensure the safe environmental performance of the industry, and the development of the resources. We’re getting there. The issues are becoming clearer, and this administration has taken a position on those issues to highlight the importance of the resource [and] the industry, but also to stick to the facts in terms of the safety and environmental issues that need to be addressed and are being addressed.”

Krancer, no stranger to the debate over Dimock, generated some applause with his response.

“Dimock? Nobody called the EPA into Dimock. The EPA called the EPA into Dimock. And then the EPA took about 10 months and spent millions of dollars of Superfund Response money — at a time when the president was cutting the budget on Superfund Response money — to show us exactly what we already knew in Pennsylvania long before they ever expressed any interest in Dimock. Four different federal courts have said that this EPA is rogue and out of control. [This] highlights exactly why we need a change in Washington.”