President Obama’s decision to place the entire Chukchi Sea and most of the Beaufort Sea off-limits to energy development is “stunning” and will deny economic opportunity, according to a trio of powerful elected officials, all of them Republican, representing Alaska. 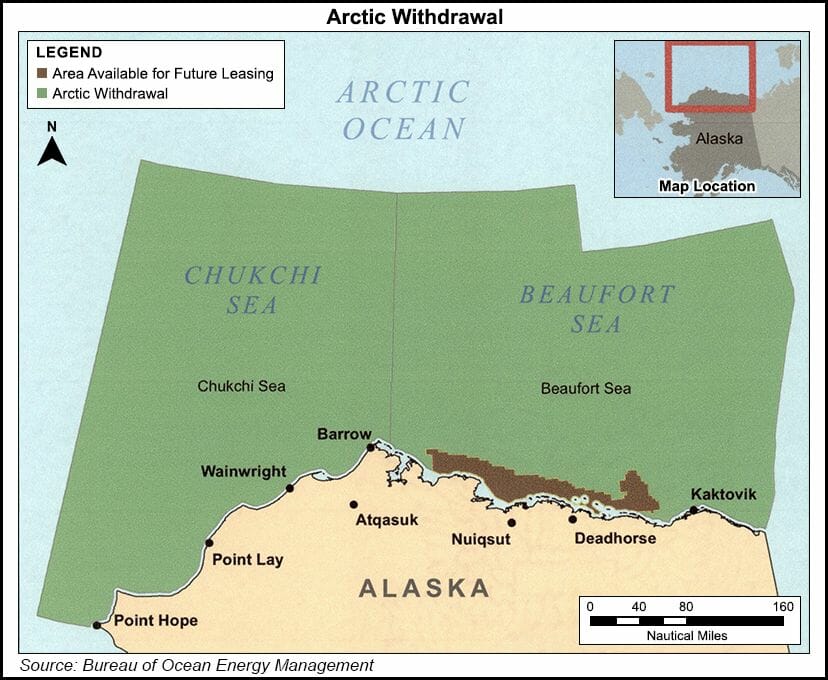 “The sweeping withdrawal disrespects the Alaskan people, is not based on sound science, and contradicts the administration’s own conclusions about Arctic development,” Sen. Lisa Murkowski, Sen. Dan Sullivan and Rep. Don Young said late Tuesday. “It will have lasting consequences for Alaska’s economy, state finances, and the security and competitiveness of the nation. In making the decision, President Obama yet again sided with extreme environmentalists, while betraying his utter lack of commitment to improving the lives of the people who actually live in the Arctic.”

The withdrawal areas announced by Obama on Tuesday encompass 3.8 million acres in the north and mid-Atlantic Ocean off the East Coast and 115 million acres in the U.S. Arctic Ocean, according to the Department of Interior. In the Atlantic, the withdrawal decision protects 31 canyons, extending from Heezen Canyon offshore New England to Norfolk Canyon offshore of the Chesapeake Bay. The Arctic withdrawal encompasses the entire U.S. Chukchi Sea and significant portions of the U.S. Beaufort Sea.

Simultaneously, Canadian Prime Minister Justin Trudeau said his country would designate all Arctic Canadian waters as indefinitely off limits to future offshore oil and gas licensing, to be reviewed every five years through a climate and marine science-based life-cycle assessment.

The joint announcement with Canada “amounts to an incredibly lopsided trade for the United States,” according to the Alaskan lawmakers. “While President Obama’s Arctic withdrawal is indefinite, Canada will review the status of its Arctic waters every five years. With Russian development already underway in the Arctic, it may be just a few short years before our nation is bracketed by activity on both sides and importing the oil resulting from it.”

The Beaufort and Chukchi seas together form one of the most prospective basins in the world, they said, with an estimated 23.6 billion barrels of oil and 104.4 Tcf of natural gas.

Obama invoked the 1953 Outer Continental Shelf (OCS) Lands Act in his move to block indefinitely energy development in the Arctic and Atlantic oceans. Presidents George H.W. Bush and Bill Clinton each used the law to temporarily block drilling in the OCS. Environmentalists and House Democrats had urged Obama to remove the Atlantic and Arctic oceans from future oil and gas leasing using the law, which includes no provision allowing a successor to repeal such a decision. In 2014, Obama used the same authority to extend indefinitely a freeze on oil and natural gas leasing in the waters of Alaska’s Bristol Bay.

While President-elect Donald Trump as of midday Wednesday had not responded to Obama’s decision specifically, during his 2016 campaign he proposed allowing states to regulate energy development over federal agencies and opening up more federal lands to drilling.

Reversing Obama’s decision would require “a more significant Congressional or Executive Branch intervention than merely rewriting the Five-Year Program the Obama administration finalized on Nov. 18 (and any such intervention seems virtually certain to be challenged in court),” according to Christi Tezak, managing director of ClearView Energy Partners LLC. “The incoming Trump administration’s most feasible rollback mechanism appears to be the budget reconciliation process established by the 1974 Congressional Budget Act.”

Secretary of the Interior Sally Jewell defended the president’s action, saying it “recognizes the vulnerable marine environments in the Arctic and Atlantic oceans, their critical and irreplaceable ecological value, as well as the unique role that commercial fishing and subsistence use plays in the regions’ economies and cultures. The withdrawal will help build the resilience of these vital ecosystems, provide refuges for at-risk species, sustain commercial fisheries and subsistence traditions, and create natural laboratories for scientists to monitor and explore the impacts of climate change.”

The withdrawal does not affect existing leases and would not affect a nearshore area of the Beaufort Sea, totaling about 2.8 million acres, that has high oil and gas potential and is adjacent to existing state oil and gas activity and infrastructure, according to the Department of the Interior. That area will be subject to additional evaluation and study to determine if new leasing could be appropriate at some point in the future. Interior’s five year offshore leasing program for 2017-2022 does not include lease sales in either that area or in the withdrawn areas, the agency said.

The announcement was widely hailed by environmental groups, but reaction from others was largely negative.

“This action by President Obama in his last days in office is another disturbing example of short-sighted policy decisions made by the administration to limit access to oil and natural gas on federal lands; it is the kind of policy that flies in the face of his own calls for a diverse all-of-the-above energy strategy,” said the American Chemistry Council. “American manufacturers rely on secure and affordable energy supplies to compete globally. Yet, with this action the Administration has chosen to take sizable deposits of oil and gas off the table, which will eventually place upward pressure on prices and put America’s ability to compete in global markets in jeopardy.”

“Congress did not intend for the president to be able to exploit a rarely used, 24-word provision to make entire seas off-limits from energy production,” said Karen Harbert, CEO of the U.S. Chamber of Commerce’s Institute for 21st Century Energy. “We hope the Trump administration will repeal this action, and will work to consider all options to undo this unlawful action.”

At least one environmental group did have a gripe with the Atlantic Ocean portion of Obama’s decision, which did not extend protections south of Norfolk Canyon off the coast of Virginia.

“There is no question this is encouraging news for this important area off the coast of Virginia, yet the rest of the Southeast coast is just as environmentally and economically valuable and deserving of protection,” said Sierra Weaver, leader of the Southern Environmental Law Center’s coast and wetlands program. “The message from coastal communities and businesses could not be louder or clearer: we do not want offshore drilling. Not just for the next five years, but for all time.”