The U.S. Bureau of Safety and Environmental Enforcement (BSEE) has received a permit application to use hydraulic fracturing (fracking) on an oil well in federal waters off the coast of Southern California. 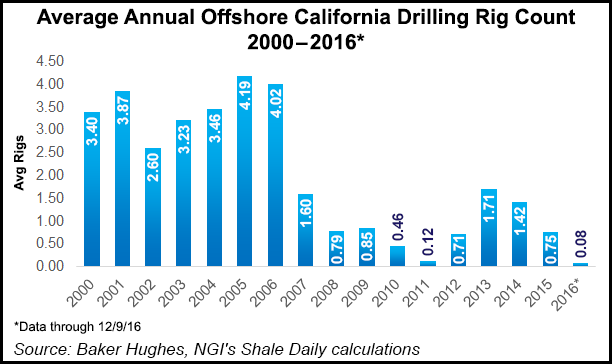 If approved, it would be the first offshore fracking in the area since the lifting of a federal fracking moratorium earlier this year.

Ventura, CA-based DCOR LLC submitted the application to BSEE seeking to frack an offshore well from Platform Gilda in the always-sensitive Santa Barbara Channel. The operator proposes to begin fracking operations Sept. 1, 2017, with the process lasting up to 30 days.

San Francisco-based environmental group The Center for Biological Diversity (CBD) opposes the permit, contending that DCOR could be allowed to “discharge fracking flowback fluid into the ocean.”

“It’s disgusting that people at California’s beaches have to worry again about fracking chemicals dumped in the ocean,” said Kristen Monsell, a CBD attorney. “Federal approval would signal a shocking disregard for offshore fracking’s threats to marine animals and human health. Green-lighting this plan could encourage a dangerous new wave of fracks off our coast.”

Offshore fracking was halted in federal waters off California in January, after a CBD lawsuit challenged the government’s “rubber-stamping” of fracking permits without any analysis of threats to wildlife and ocean ecosystems. The federal moratorium was lifted in May, following what the fracking opponents consider a cursory environmental review that acknowledged fracking’s environmental risks, yet greenlighted use of the technique.

CBD and its allies filed another lawsuit in November challenging the legally inadequate review in federal court.