Fifteen months after the federal government considered adding — for the first time — areas of the Atlantic Ocean to its five-year offshore oil and gas leasing program, the Obama administration on Tuesday removed the areas from consideration, citing criticism from coastal communities and the military. 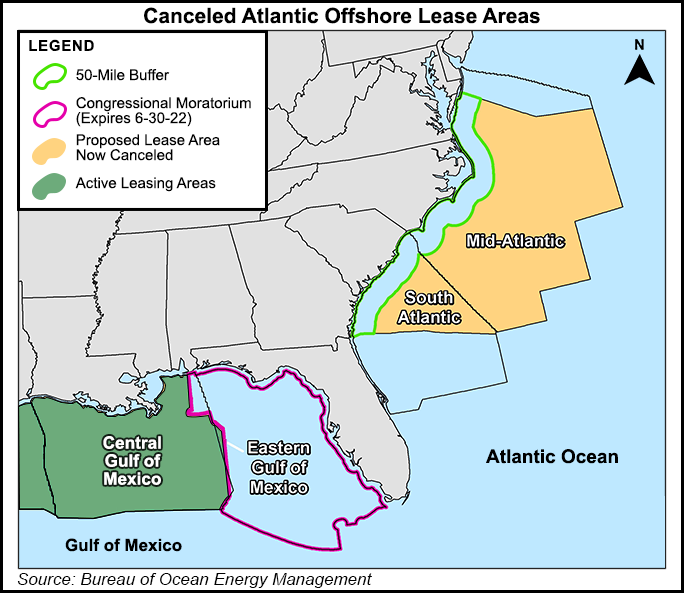 During a press conference Tuesday, Department of Interior (DOI) Secretary Sally Jewell said the Mid- and South Atlantic area, extending from Virginia to Georgia, would be removed from its Outer Continental Shelf (OCS) Oil and Gas Leasing Program for 2017-2022. The areas were first included in a draft version of the plan in January 2015 (see Daily GPI, Jan. 27, 2015).

“We heard from many corners that now is not the time to start leasing off the Atlantic Coast,” Jewell said. “This includes many local communities whose livelihoods depend on fishing, tourism and shipping activity. When you factor in conflicts with commercial and national defense activities, market conditions and opposition from local communities, it simply doesn’t make sense to move forward with the Atlantic lease sale in the near future.”

The proposed program will include 13 potential lease sales: 10 in the Gulf of Mexico (GOM) and three in offshore Alaska — one each in the Cook Inlet, the Beaufort Sea and the Chukchi Sea.

In accordance with National Environmental Policy Act (NEPA) rules, the DOI will publish a draft programmatic environmental impact statement (EIS) of the proposed program, and both the EIS and the program itself will be subject to separate public comment periods following their publication in the Federal Register — the EIS for 45 days, and the program for 90 days. The DOI will use the public comments it receives to prepare a final programmatic EIS and a proposed final program.

Jewell said DOI received more than 1 million public comments on the leasing program, adding that “there was tremendous interest in the Atlantic, and generally it was expressing concern from every source.” But she denied that the Department of Defense (DOD) — especially the U.S. Navy, which operates the world’s largest naval base at Norfolk, VA — was the primary factor behind removal of the Atlantic areas.

“The DOD comments to us, were one among many factors,” Jewell said. “We weren’t just waiting for DOD to weigh in. This has been something that has had multiple public meetings over a prolonged period of time — over a year — and an assessment of all of those comments led to this decision.”

Abigail Ross Hopper, director of DOI’s Bureau of Ocean Energy Management (BOEM), said the Navy analyzed how its mission would be impacted by oil and gas development in the Atlantic.

“The map and the impression they provided…show that the entire proposed lease area is conflicted,” Hopper said. “There are challenges throughout the area to development there. The scope and the scale of their mission in the Atlantic cannot be understated, and so that’s why it was one of the factors.

“More of the area is actually conflicted now than it was in 2010, as the Navy’s mission has increased and the scale of their operations has increased.”

Jewell and Hopper also denied that the current price environment for oil and gas was a major factor in the decision.

“Let me be clear — [oil prices] certainly impact the interest of industry, and how enthusiastic they are about their participation in new frontier areas,” Jewell said, adding that BOEM projects industry interest based on oil price scenarios ranging from $40-160/bbl. “But we really rely on the industry interest. The oil and gas potential, and what would be economically recoverable, are all factors into [BOEM’s] analysis.

“Current oil prices were not a material factor in the decisions that we’ve made today, but market conditions at large — and the interest of the industry in pursuing lease sales over a five-year period — is all taken into account as one of the many factors.”

Hopper added, “the reality of the oil and gas market today is that there has obviously been increased onshore production over the last few years. As we look at the type of production that we would expect from a single lease sale in the Mid- and South Atlantic, we find that taking that lease sale out would lower oil production only by 0.1%.”

Jewell acknowledged that a future administration could alter the current five-year OCS program and put the Atlantic areas back in but “it couldn’t be done quickly.”

“We have been at this current five-year program for about three years,” she said. “It’s a laborious process and takes a lot of public input. That’s what it’s designed to do. But it certainly could be changed by a future administration, and the whole five-year program could be replaced with a new one. In addition, Congress could take action and force a lease sale…

Predictably, the oil and gas industry blasted the decision while environmental groups voiced their support.

“Why keep these plentiful resources, which are still needed foryears to come, off limits?” Barry Russell, president of the Independent Petroleum Association of America (IPAA), asked Tuesday. “The United States should have the most viable options on the table today.

“Even if the offshore industry were able to explore along the East Coast, it would be a multi-year process with all the proper planning and environmental controls in place. Instead, the Obama administration today chose to reverse course and place additional restrictions on these offshore areas, which takes these opportunities off the table until at least 2022 and likely beyond. This further deters investment and removes the flexibility that America needs, should the international situation change a few short years from now.”

Jacqueline Savitz, a vice president of environmental group Oceana, said President Obama “has taken a giant step for our oceans, for coastal economies and for mitigating climate change.

“This is a courageous decision that begins the shift to a new energy paradigm, where clean energy replaces fossil fuels, and where we can avoid the worst impacts of decades of our carbon dioxide emissions…it will prevent oil spills and coastal industrialization; it makes seismic testing unnecessary and it will help promote the clean energy solutions that we so desperately need.”