In the aftermath of a prolonged natural gas storage well leak in Southern California, the Obama administration on Friday launched a federal interagency task force to examine gas storage safety. 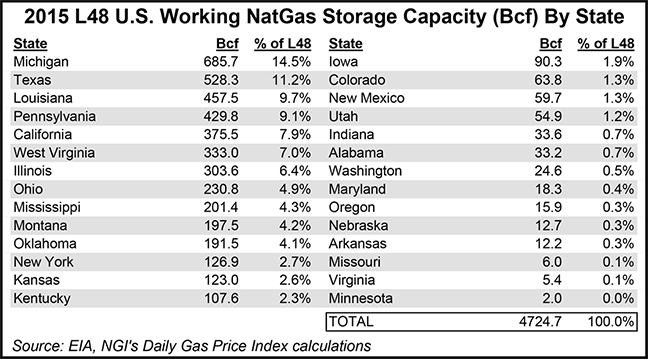 The multi-agency effort will be headed jointly by Franklin Orr, undersecretary for science and energy in the Department of Energy (DOE), and Marie Therese Dominguez, administrator of the Department of Transportation’s Pipeline and Hazardous Materials Safety Administration (PHMSA). Technical experts from five other agencies, including FERC, will be involved.

Shortly after the leak at Southern California Gas Co.’s Aliso Canyon storage facility was sealed in mid-February (see Daily GPI, Feb. 18), Orr and Dominguez visited the 3,600-acre site in the far northern end of Los Angeles, and it reinforced the “magnitude and gravity” of the situation, they said in a blog post Friday.

They said it is “very concerning” that the Aliso Canyon leak happened, took four months to fix and disrupted thousands of nearby residents.

Orr said that DOE will hold workshops with industry, state and local leaders and other stakeholders to support the development of best practices on well integrity and proper response plans. An effort in that regard was launched last month by California state officials.

Los Angeles Mayor Eric Garcetti said the city supports the task force and the Los Angeles Department of Water and Power, the nation’s largest municipal utility, will work with DOE “to reduce the city’s dependency on natural gas in the future.”

Sierra Club representative Jessica Eckdish praised the latest move by the federal agencies, noting that the task force is “well-equipped to uncover the answers needed to protect communities and our climate from the dangers of deadly methane pollution.”

Eckdish praised the task force’s potential near-term impacts on making gas storage safer, but said “fossil fuels can never be made safe,” and that ultimately the nation needs to transition to renewable energy sources.

Orr and Dominguez said the interagency task force will publish the results of its workshops and other work later this year as a means of helping companies and states avoid incidents like the leak at the 86 Bcf-capacity Aliso Canyon facility, which is now closed pending a thorough assessment of all of its 115 storage wells (see Daily GPI, March 29).

In the wake of the Aliso Canyon incident, federal officials have urged companies around the nation to inspect storage wells as soon as possible, and PHMSA recently issued an advisory bulletin encouraging operators to review and implement American Petroleum Institute and Interstate Oil and Gas Compact Commission recommended practices. PHMSA also has said it will enact “regulatory actions” to beef up gas storage facility safety.

“We view this work as critical because natural gas is a relatively clean fuel that provides heat to millions of American homes and is expected to provide a third of our nation’s total electric power generation this year,” Orr and Dominguez said.

The interagency task force will get technical assistance from the Environmental Protection Agency, Department of Health and Human Services, Department of Interior, Federal Energy Regulatory Commission, and National Oceanic and Atmospheric Administration.