Oasis Petroleum Inc. said it expects production to be essentially flat entering into 2019, and plans to use cash flow from its assets in the Williston Basin to fund a small outspend in the Permian’s Delaware sub-basin. 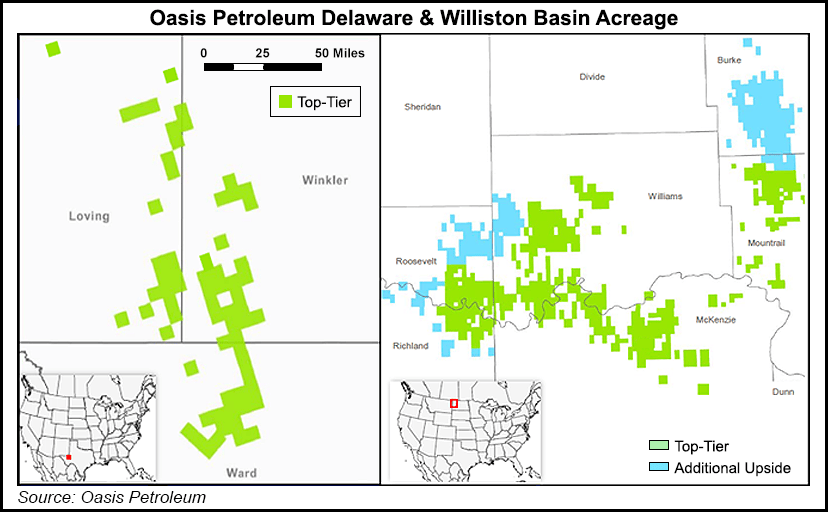 The Houston-based operator also cut its capital budget by more than 40%, marking $550 million at the midpoint for exploration and production (E&P) and related expenses in 2019, which would fund completion of about 70 gross operated wells in the Williston and nine-to-11 wells in the Delaware. By comparison, Oasis spent $942.2 million on E&P in 2018, when it completed and placed on production 121 gross wells, including 114 in the Williston and seven in the Delaware.

“Going forward, development of the Williston will continue to be a significant driver of activity and provides a source of free cash flow to fund Delaware activity,” CEO Tommy Nusz said during an earnings call Wednesday. “Even with oil price trading well above $50 today, we intend to execute on our planned activity for 2019 and we’ll use excess free cash flow to reduce leverage.”

Nusz said Oasis would concentrate its Williston development activity for 2019 in the Wild Basin operating area, with additional completions across the Indian Hills, Alger and Red Bank areas.

Oasis’s plans for 2019 also include conducting a new spacing test in northern Alger, in advance of developing its top tier acreage at Alger and in the southern part of the Cottonwood area. In the Delaware, Oasis will conduct a three-well spacing test targeting the Wolfcamp A — two in the lower interval and one in the upper. Additional drilling across will target the Wolfcamp B and C and the Third Bone Spring.

“This decision reflects the current commodity outlook and also drilling efficiencies that allow us to hold our acreage with fewer rigs than originally anticipated,” Nusz said.